Muslim to be Vice Director for Bavarian Oberammergau Play

An Oberammergau for Nathan the Wise?
Edit: Lessing's Play, "Nathan the Wise", is a bit of syncretistic fantasizing where a Jewish wise man attempts to bridge the gap between Judaism, Christianity and Islam with the help of "wise" Saladin and a helpful Templar. The play sounds a lot like the mediocre film, "Kingdom of Heaven" by Ridley Scott.

(Munich) At a time when the religious arbitrariness that somehow rhymes with all sorts of isms and ultimately especially with agnosticism and atheism, a Muslim can also be director of the Oberammergau Passion Play. At least second director. For now. That the passion plays depict the crucial five days in the earthly life of Jesus Christ with his saving work for humanity, which a Muslim does not believe, it does not matter. Because if the new director of Oberammergau, the Turk Kenan Abdullah Karaca, does not bring faith, he brings professionalism, and that after all is what matters. Especially since it's more about culture, theater and entertainment than religion.

Artful reasons for the replacement are not lacking. Strengthening internationality is only one. Players are supposed to be from Oberammergau, which goes back to an old injunction, only locals, and finally, Karaca is a native of Oberammergau, so a local. That a native only recently in Bavaria that has a Turkish passport would then still require explanation, but on "such topics" it is indeed better "not to talk too much." And after all, Wulff and Merkel have said that Islam "belongs to Germany."

Whoever is a Bavarian and Christian, is for us to decide

And anyway "No way", say the majority of the city council of Oberammergau. Where would we be then: Who is a resident and who is a Christian, is for us to decide. And we say that the Turk and Muslim Karaca is a Bavarian and a Christian ... or at least a half ... or maybe three-quarters, or ... Aba Sakradi and übahaupt was ma wäidofffa, which means: now and ever we are open-minded. Promise of 1633 or not, since 1990, we have indeed had a Weiberleid (women) under 35 in the play and even Lutherans (Protestants). And just now, Hamma, who is also a Muslim. If that isn't modern.

One can safely assume that Christian Stückl, since 1990, the first director, appointed Karaca precisely because he is Muslim. Abdullah Kenan Karaca has studied directing anyhow and is "proud" of his appointment. Stückl knows him from the Munich Volkstheater. According to the unwritten laws of the culture industry, one has to make a name for themselves, no matter what the cost. Provocations have cult status - at least somehow to stay on cult theme, when thus something quite different is meant. Not all have seen it that way in the council. The vote went from 13 to 5 votes, but "enlightened reason" has triumphed. 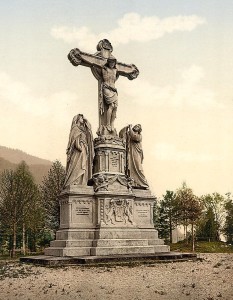 That's right, Gotthold is pleased with the appointment. Gotthold Ephraim Lessing indeed already knew 236 years ago, that all religions are equal, in other words these at best are not to be spoken of except insofar as they serve the state to maintain law and order.

Passion plays represent the suffering, death and resurrection of Jesus Christ with a Muslim as (vice) director, that's the arbitrary relativism and especially the perfect expression of a politically invoked "welcoming culture". Everything as usual. The message seems pretty clear.

"Soon in deepest Bavaria a determined young Turk will participate in the fortunes of a deeply religious, Christian tradition: for the first time in 380 years, a Muslim will be part of the management team of the Oberammergau Passion Play. Salam Aleikum under wooden cross," exulted numerous media, in this case the Austrian Broadcasting Corporation, (the Austrians are still related to the Bavarians.)

Public criticism? "But the issue is too sensitive"

The ORF also provided further illumination: "There are public criticisms of Oberammergau, but the issue is too sensitive." What can be sensitive: The Passion Play, or the fact that Karaca is a Muslim and foreigner? Anyway, the recent Oberammergau decision has a lot to do with modern prohibitions on thinking, which increasingly take hold in the freest country and the freest society on German soil.

The texts of the Passion Play are still being "touched up". The text of the 42nd edition in 2020 is going to be "revised." Who knows, maybe the Christian Passion Drama will even end with Lessing's idea drama of Nathan the Wise.

I'm Bavarian myself and I was really surprised when I heard about that. It seems that people in Oberammergau are too ignorant to understand that Muslims have a totally different idea about the Crucifixion (they believe that a someone, "who looked like Jesus", was crucified instead of him).