Vocations Crisis: Decline of the Diocesan Clergy -- Growth of Tradition 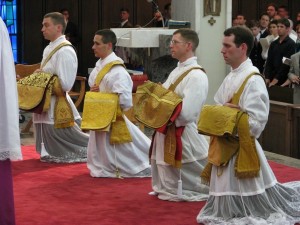 (Paris) In many areas in  secularized Europe a veritable spiritual desertification is taking place. Emblematic of this is the crisis of vocations in France. The figures speak for themselves: in 1966, France had 4,536 seminarians. A few years later, in 1975, their number had plummeted to 1,297. The decline had slowed, but it continued. In 1996, there were 1,103 seminarians. It was followed by another slump: in 2005 there were only 784. In 2011 they   finally achieved with 710 seminarians, the lowest since the time of the French Revolution.
If mathematics is not an opinion, the results since 1966 show a decline of 84 percent. "This is the result  of the modernist theologians turning to promote that with which they have destroyed the sense of the supernatural. The figures are of such clarity that they might bring even  ,modern' theologians to blush and should let them fall forever into a penitential silence. Anyway, they require no further comment," said the traditional  blogger Cordialiter .
What is needed is a serious analysis of a catastrophic situation. "Numbers are neither traditionalist nor modernist. They are facts that we need to take note of,"  says Cordialiter.
The situation in France is dramatic. In foreseeable next few years, there will be even fewer active priests.The average age of priests is in these dioceses is already at 75 years.

Key to the vocation crisis is ignored in the dioceses

"The situation is seriously dramatic. It is not a reason to sit back, but there is also no reason to despair," said Cordialiter. Within the vocation crisis, opposing trends can be observed. While the diocesan clergy almost threatens to go  extinct,  the orders and communities of the Old Rite are growing. The vocations that are growing  today, lead  young mento where the faith, the liturgy, the faithful to Christ,  Scripture and Tradition are taken seriously.
"The hope is that more seminaries will be opened, where it is makes ​​possible an even greater number of tradition-bound young men to strive for the Catholic priesthood. It is the holy priests, who will who will model their vocations."
Where the Sacred Liturgy is celebrated reverently and worthily, where the teaching of Christ is faithfully proclaimed and the order of the Church is respected, there even today can be found vocations. These flourishing oases in the desert, the communities of tradition, some ancient monasteries and several new institutions should all come to the attention of Church leaders, for in them is hidden the key to overcome the crisis of vocations.
Astonishingly, the diocesan church leaders prove sluggish, disinterested or even hostile. "The dilemma is that the way to overcome the crisis of vocations is in front of everyone, but many - and I speak only of those who are responsible -. are looking pointedly away." One has the impression that they want no improvement. The reasons are complex and go deeper. It is not only "convenience" or "world adaptedness", but in many cases it is about a "different theology". In order to avoid having to address this  question, they would prefer to put up with the decline of priestly vocations.
"The diocesan bishops are responsible for how they respond in their diocese to the vocation crisis, whether the good example is ignored or is imitated. They will be held accountable for it. Regardless of this  the dissolution of the diocesan clergy progresses and it is only a matter of time before the ordinations of  tradition exceed that the Novus Ordo, at least in France," said Cordialiter .
Text: Giuseppe Nardi
Image: FSSP
Trans: Tancred vekron99@hotmail.com
Link to Katholisches...
AMDG
Posted by Tancred at 7:18 AM

With all the closed former seminaries and monasteries in France, is there any word yet on plans for one of the traditional institutes to take over one for use, rather than them paying to construct their own new ones? The ICRSS, FSSP, and IBP are all in need of larger seminaries right now for their growing vocations.

The ICRSS in particular has such an overcrowded seminary that they've been tacking on extra rooms as they could for years, and seem to be about maxed out where they are. Surely there must be many large ecclesiastical buildings in France that they could put to perfect use?

1. Money. People with large families (i.e. traditionalists) don't have the money to donate for such large undertakings.

2. Money. Rich secularists have more money to buy this kind of property. Example: Katy Perry and the convent in the LA archdiocese.

3. Money. These seminaries are old and are in need of renovations. It would be cheaper in the long run just to build a new one. Example: The new FSSPX seminary in Virginia.

4. Politics. Modernists don't want to sell ecclesiastical property to their archenemies known as traditional Catholics. Example: FSSPX parish in Pittsburgh or FSSP being rejected the use of parishes in many liberal diocese.

Not everyone who attends a traditional chapel is destitute with a large family. Some are wealthy, while having a large family, some are poor with no family, etc....

You make some good points, but there is just no way building a new seminary from scratch would be cheaper than restoring an existing one. The new SSPX seminary is costing in the neighbourhood of $40 million to build, and that doesn't even include the church. Obviously most dioceses would be unwilling to sell to the SSPX so they had no other choice. The other traditionalist orders certainly don't have that kind of money, in that I agree with you. Taking over an existing building where someone is willing to give it to them, or buying it through a third party would be significantly cheaper and more feasible. I can think of several buildings off the top of my head in Quebec and the UK alone which would be ideal.

The traditionalists, especially non-FSSPX, don't have the population to wealth ratio to build or spend like crazy. The Polish immigrant communities (Oblates of Mary) for a contrasting example, build 50 million dollar Church complexes every 15-20 years, I'm talking big lots of land coupled with community centers and retirement homes. And yes, they have their businessmen and millionaires but here's the kicker; the average middle class Catholic has 3 children and a house and two cars in the suburbs. Not only is the parish massive (40,000 people vs 400 in the FSSPX) but the average parishioner has the money to donate, Poles love giving money to the Church to boot. On top of that some of the FSSPX communities are relatively newer and are still building up their communities (e.g. business contacts, schools and so forth) while other communities are deeply entrenched. Comparing the FSSPX to the Polish OMI is like comparing the Franciscans at the time of St. Francis to the Papal States during the Renaissance.

Renovating an old seminary has it's problems, some of them in France have already reached their life spans. Many 19th century seminaries, parishes and Cathedrals are either going through reno right now or are being sold. If you build a new seminary from scratch, and if you build it like a tank, then it can last hundreds of years and you won't have to worry about doing reno every 50-75 years. You get what you pay for, sometimes it's better to get a $50 pair of jeans that will last you a decade or two than a pair of Wal-Mart jeans that will last you a year.

The modernists won't sell to the FSSPX, yes. The FSSP? They don't like them either and the FSSP isn't as large as the FSSPX, even though the FSSP does have a few wealthy parishioners here and there but it's just not enough.

I use the FSSPX and Polish missionary Oblates of Mary as an example because they have similar age demographics; young families and some soon to be retirees. The retirees always have money but families are a different story. The FSSPXers live on a tight budget because of their large families, the Poles are living in comfort and luxury due to smaller families. I haven't seen one Audi or BMW in an FSSPX parking lot, I see plenty in the OMI parking lot. The important difference is that FSSPX children grow up to become Catholics while many of the Polish children/youth either apostasize or become culture Catholics. The FSSPX is the tortoise and the Poles are the hare... except the FSSPXers breed like rabbits while the Poles breed like turtles.

All that being said, it's best just to take the money God gives you. It would be nice to have a traditional-Catholic Constantine but being poor is probably better for the sanctification of souls.