The Hermeneutic of Communism? Pope Francis' "Beatification" of Marxist Jesuit 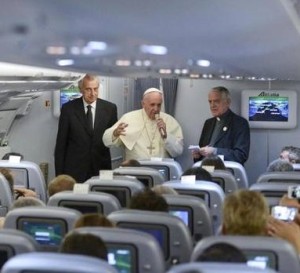 (Rome) On the return flight to Rome Pope Francis answered a few questions for the accompanying journalists on the plane. The Catholic Church leader was asked also to explain the provocative gift made the Pope of the hammer and sickle with Christ from the Bolivian President Evo Morales. Vatican Radio published the questions and complete answers in the original language.
Aura Vistas Miguel (Portugal Vaticanist): "Holiness, how did you feel when you saw the gift of President Morales with sickle and hammer with Christ? What became of this subject?"
Pope Francis: "I - it is strange - did not know that and did not know that Father Espinal was a sculptor and a poet. I have learned that during  these days. I've seen it and it was a surprise for me. Secondly: It can qualify as a genre of protest art. For example, there was an exhibition by a brave, creative Argentine sculptor  in Buenos Aires a few years ago. There was protest art, and I remember a work that showed a crucified Christ on a bomber coming down. This was a critique of Christianity, which is allied with imperialism, represented as a bomber.
First point: So I knew nothing about it; Second point: I qualify it as protest art that can be offensive in some cases. In some cases. Third, for this particular case: Father Espinal was killed in 1980. That was a time when the liberation theology had many different currents, one of them was the Marxist analysis of reality, and Fr. Espinal belonged to this. I knew because I was at that time Rector of the Faculty of Theology and they talked a lot about it, and who their representatives were in the different currents. In the same year  the Superior General of the Society of Jesus, Father Arrupe, wrote a letter to the whole society about the Marxist analysis of reality in the theology that he stopped a little, saying, No, you can not. These are different things, you can not do that, that's not right. And four years later, in 1984, the CDF published the first small volume, the first statement of the Liberation Theology, which criticized it.
Then came the second, which was more open to the Christian outlook. I simplify, of course. Let's take a hermeneutics of that era.   Espinal is an enthusiast of this Marxist analysis, as well as theology, for which he used Marxism. Hence comes this.  The poems of Espinal belong to this genre of protest, but it was his life, it was his way of thinking, he was a special man with a lot of human genius, and who fought in good faith. As I have done such a hermeneutics, I understand this. For me it was not an insult. But I had to make this hermeneutics, and I say this to you, so that no false opinions arise. This object is with me now, it's coming with me. You may have heard that President Morales wanted to give me two honors, the highest award of Bolivia and then the Order of Fr. Espinal, a new order. Well, I have never accepted a ceremony that does not suit me. But he did it with a lot of good will and the desire to do me favor. And I thought that that comes from the people of Bolivia - I've been praying for it and I thought: If I bring it to the Vatican, where it goes to  a museum and no one sees it. So I thought to offer it to the Virgin of Copacabana, the Bolivian Mother, so that it goes to the Sanctuary: The work will be in the Sanctuary of Copacabana, together with the two awards that I received. Christ, however, I take with. Thanks. "
Translation if: Giuseppe Nardi
Image: Vatican Insider
Trans: Tancred vekron99@hotmail.com
Link to Katholisches...
AMDG
Posted by Tancred at 8:29 AM