Exile of Father Lanzetta of Franciscans of Immaculate At End 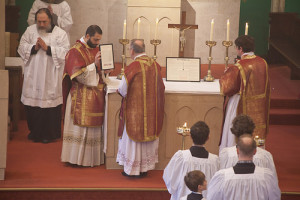 (London) Father Serafino Lanzetta, one of the most brilliant minds of the Franciscan Friars of the Immaculate, has been appointed the parish priest of Saint Mary in Gosport, England. For the last few weeks he has been already in place and has begun to make a biritual of a  New Rite parish. The end of his exile coincided with the agony and  death of Commissioner Volpi.[God rest his soul]
Father Lanzetta was among the first victims of the provisional administration of the until recently thriving Order. By August 11, 2013 he and all the priests of the Order had been banned from celebration of  the traditional rite  of the Holy Mass by  the Congregation for Religious. At the same time the Capuchin Father Fidenzio Volpi took control as Apostolic Commissioner of the Order.

With the beginning of autumn 2013, all the leading figures of the Order were dismissed from  their offices  and relieved of their duties. Father Lanzetta, then pastor of Ognissanti in Florence had to leave his parish on 4 October.  Due to bureaucratic difficulties he received a grace period  until October 21. While others were exiled to Latin America, Africa or Asia, his place of exile was the only monastery of the Order in the German-speaking world.
Since then, he had  lead a reclusive life in the monastery Kitzbühel in Tyrol. He took advantage of this time to complete his doctoral studies.  His thesis was supervised by the famous German dogmatist and Mariologist Manfred Hauke  "Il Vaticano II, un Concilio Pastoral" (Vatican II, a Pastoral Council. Hermeneutics of Council Teachings) was approved at theTheological Faculty of Lugano  in Switzerland.
How it is this religious priest, who worked in Italy, is led to England to say the traditional Rite,  is not known, but the news gratifying yet in any case. 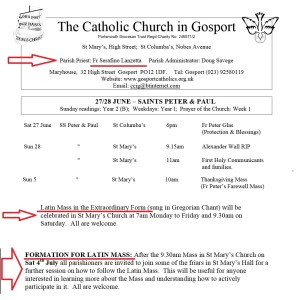 According to website of the Diocese of Portsmouth in southern England, Father Lanzetta is to officially assume his pastorate on  September 8  on the Feast of the Nativity of Mary. In fact, it has been already since the feast of Corpus Christi that he is already filling his new place of work and the duties of the parish priest. In parish journal of Gosport he is already listed as such.
The parish of Gosport is run by Franciscans of the Immaculate under the guidance of Father Lanzetta since  a few weeks ago. The parish also hosts a branch of the Franciscan Sisters of the Immaculate.
The current parish journal informs that starting next week at the St. Mary's Church, Holy Mass will be celebrated from Monday to Friday at 7 o'clock in the morning and on Saturday at 9:30 o'clock in the extraordinary [sic] form of the Roman Rite: "All are invited to attend".  A Sunday Mass in the old rite is not provided, but that seems to be only be a matter of time.
Father Lanzetta also offers a weekly introduction to the traditional form of the Mass, which intends to make a transiction of the birituelle parish to the neurituellen parish.
Text: Giuseppe Nardi
Image: Rorate Caeli / Gosport Parish Newsletter (Screenshot)

"the traditional form..." They mean the CATHOLIC Mass.

Thanks be to God! So pleased to see this holy priest visible again although I have no doubt that his exile was most meritorious. And now, let us hopefully see the Vetus Ordo returned to the Institute as these have been the only priests directly forbidden to offer that Mass in the whole world (although I am certain that many dioceses might quietly forbid). The demons especially hate the Mass of the Ages.

"The demons especially hate the Mass of the Ages."
I immediately thought of Pope Francis and his goons and gang of thug Cardinals and Bishops.....Kasper, Mariagiaga, Dolan,Paglia,Forte and a handful more.

UK is better for him, Italy's no safe, too many masters.....