Christian Syria: Love in the Ruins

(Damascus) destruction and new beginnings are close together for the Christians in the Syrian city of Homs, as the images of a Christian wedding in the ruined Church of St. George show.
The attempt to overthrow President Bashar al-Assad and his Alawites has laid Homs  in ruins. The third largest city in Syria to the west of the country, near the border with Lebanon, it is located in the fertile valley of the Orontes, as the river was called in ancient times. Today it is called the Nahr al-Asi.
In 2011 the Sunni made Homs a stronghold of anti-Assad protest. In 2012, however, it became apparent that hiding under the blanket of allegedly "pro-Western" and "democratic" rebels, were Islamist groups. In April 2012 it was announced that the Farouq Brigade of the Christians of Homs had to exact the Muslim jizya poll tax. In May 2014. Homs was recaptured by government troops. 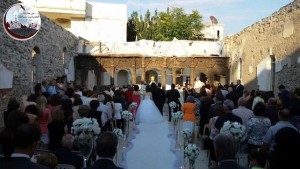 Homs wedding in the ruined Church of St. George
The images of a Christian wedding in the ruins of the Church of St. George show the horrifying extent of the destruction. It is at the same time also an expression of a new beginning and to show that the Christian community of the city is alive even after almost 2000 years.
The ancient Emesa, this is the name Homs had in the time of Jesus, was one of the first Christian communities and was a bishop's seat after the second century seat. From the Diocletian persecution 303-305, the first bishop is also known by name. In 609 the Persians conquered Homs and destroyed the churches. In 628  the Christian reconstruction started. Weakened by the Persians, Byzantine Syria fell prey to the Muslims in 637. In 1785 Muslims and Greek, Syrian and Armenian Christians were still balanced in Homs. In 1907  a third of the population was Christian. Before the outbreak of war, Homs counted,  with its suburbs, around one million inhabitants. Of these, 60 percent  were Sunni, 20 percent Alawite and 15 percent Christian. In some districts like Fairouzeh and Zaidal  Christians represented a majority with  60 percent and more. Not far from Homs, several Christian villages are among Maalula, where almost all the inhabitants are Christians and where even Aramaic, the language of Jesus, is spoken.
See the slide show...
Trans: Tancred vekron99@hotmail.com
AMDG
Posted by Tancred at 2:50 PM

That is THE most beautiful wedding setting I have ever seen!

The US and Israel are responsible for this and EWTN Nightly News says not a word about this truth but cater to Jew driven Neocons and its master Idol fake Israel. Heretics with a long reach. You can watch and be a heretic too.

IMHO, I don't know that you can trace the influence back to the governments of the US and Israel, but I agree the silence is deafening.

If it is true the Jews bought, who sold?

Masters of war and world banking system and NWO tyrants, anything else? I think it's enough.

Obviously, the Muslims had nothing to do with it.

These kinds of graffiti really make me want to close the anonymous comments.

Looking at this makes me feel ashamed of my country's involvement.