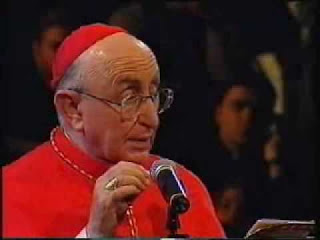 Edit: we are grateful to Missa in Latino for the sad notice of the passing of this Cardinal.

He died at the age of 87 years, the retired archbishop of Bologna, Cardinal Giacomo Biffi.

From the time he was hospitalized in Villa Toniolo (Bologna) where he had undergone a difficult surgery with removal of a leg, his health had deteriorated last Thursday, then a slight improvement before the collapse.

He turned 87 years last June 13 and had recently received a letter from Pope Francis: "I was informed of your medical condition and I wish to express my deep sympathy in this time of suffering."

Biffi was born in Milan on June 13, 1928, he had studied scholasticism in the diocesan seminary and was ordained priest on December 23, 1950 by Archbishop Cardinal Alfredo Ildefonso Schuster Benedictine.

He graduated in theology in 1975 with a thesis on "Guilt and Freedom in Today's Human Condition."


We add that the Cardinal was at once a critic of the attacks on the Church's teachings against serious sexual sins, as with the lavender mafia, the presence of the anti-Christ, against the Islamification of Europe,   a student of Vladimir Soloviev and a firm believer in ecclesia semper reformanda. We cite this interesting and hopeful excerpt from Sandro Magister:

Another reference to the diocese of Milan is in a chapter that Cardinal Biffi added toward the end of the book, in order to comfort those who fear a decline or even a disappearance of Christianity in the world.

In order to demonstrate that God "can always turn in favor of believers situations that appear desperate," Biffi gives two examples.

The first is the appointment of Ambrose as bishop of Milan in 374: "After the twenty-year episcopacy of Auxentius, a man of polluted faith, in league with the Arian empress Justina and a docile instrument of court meddling in the life of the 'holy nation', humanly speaking no one would have bet a dime on the revival of Milanese Catholicism. But then came Ambrose, and everything changed. 'After the late death of Auxentius', St. Jerome writes in his 'Chronicon', Ambrose became bishop of Milan, and all of Italy returned to the true faith'."

The second example is the arrival of Charles Borromeo as head of the diocese in 1566: "In the second part of the 16th century, after the long period of the 'de facto' unavailability of the pastors appointed (with the episcopacy, among others, of two worldly prelates from Ferrara, Ippolito I and Ippolito II d’Este), no one could have decently hoped in a re-blossoming of Ambrosian Christianity. But in 1566 Charles Borromeo arrived, a 27-year-old cardinal, and began the true 'Catholic Reformation'."

A true warrior passes, and we are the more impoverished for it. May his prayers avail much on our behalf.

Eternal rest grant unto him O Lord, and let perpetual Light shine upon him. May his soul and the souls of all the faithful departed, through the mercy of God, rest in peace.

Thank you for the posting, and the links. May he rest in peace!