Before the Synod: Family Minister "Flashes" Homophilic Signals -- Secretary Shoved Off to Malta 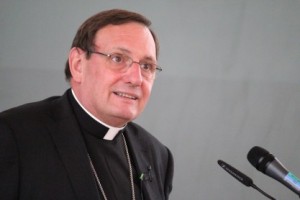 (Rome) On July 4th, Pope Francis proclaimed Msgr. Jean Laffitte, Secretary of the Pontifical Family Council,  as the new Prelate of the Sovereign Order of Malta. Is there really to be, before the Synod of Bishops on the Family in the fall, a reshuffle of the second most important office in the Congregation on Family?  Meanwhile,  the President of the Council on Family  "flashes" with the homophilic signals.
Born in Oloron-Sainte-Marie in 1952,  Laffitte studied political science at the University of Toulouse, then philosophy and theology at the Gregorian University in Rome, followed by a specialization in moral theology at the Pontifical John Paul II Institute,  for Studies on Marriage and Family. In 1989 he received the Sacrament of Holy Orders in Autun.  From 1994, he taught anthropology, spirituality and marital ethics at the Institute.
In 2003 he was appointed by Pope John Paul II. as Consultor of the CDF and shortly before his death in 2005, the Undersecretary of the Pontifical Council for the Family. A task which Pope Benedict XVI. confirmed him in and also  appointed him Vice President of the Pontifical Academy for.
In 2009  Benedict XVI. elevated him to Titular Bishop of Entrevaux  and promoted him to the Secretary of the Family Council.

Reshuffle in the Council on Family before Synod of Bishops?

The "Family Minister" of the Vatican Ironically "flashes"  homphilic signals
Curial Bishop Laffitte follows  Msgr. Angelo Acerbi in his new office,  who was appointed in 2001 by Pope John Paul II. as prelate of the Order of Malta. , Titular Archbishop Acerbi who was born in 1925 had been awarded this post of honor after almost 50 years in the diplomatic service of the Holy See.
The Grand Master of the Sovereign Military Hospitaller Order of Saint John of Jerusalem of Rhodes and of Malta, Fra Matthew Festing thanked Msgr. Acerbi  for his many years of service as Spiritual Assistant of the Order and greeted Msgr. Laffitte as his successor.
The prelate is the religious superior of the clergy, as far as their priestly duties. He also watches over the religious and priestly life and their apostolate chaplains of the order and in the spirit of the Order of Malta. He is the Grand Master and the Grand Commander in religious issues aside, affecting 13,500 religious members.
The right of appointment is  the pope's who selects the prelates from a shortlist of three candidates from the Grand Master, which is  submitted  after obtaining the opinion of the Order Council. First, however, the Order asks about any preferred candidate of the holy chair.
The prelate supports the Cardinal Patronus in the exercise of his religious duties. The Cardinal Patron since the  autumn of 2014 is Raymond Cardinal Burke, who was removed by Pope Francis from the Roman Curia, and thus the direction of the universal Church.
For the time being  Msgr. Laffitte remains also Secretary of the Pontifical Council for the Family . A replacement has not been announced. Unlike his predecessor Acerbi, who was appointed upon reaching the age limit of 75 years, the Frenchman has just turned 63. This leads to speculation about a possible forthcoming reshuffle in the Vatican "Ministry of Family." Msgr. Laffitte is considered as a defender of the marriage sacrament, while his immediate superior, Archbishop Vincenzo Paglia Curia, is more  of a stand out for really homophilic expressions.

The Public Italian Prosecutor has identified Msgr. Paglia of the Community of Sant'Egidio  (see Investigation Against the President of the Pontifical Family Council and Kasperianer Paglia ). Ecclesiastically  Archbishop Paglia  is controversial due  to his "openings" toward homosexuality, which is especially astonishing precisely because of his duties as "Family Minister" of the Vatican. On Whit Monday, 25 May, Paglia also took part in the secret meetings of Kasperians at the Gregorian  (see The Church's "Illuminati" - List of Catholic Secret Societies ).
This past June 25, Paglia addressed a press conference before the 8th World Meeting of Families  on the 22-27th September 2015 which will be held in Philadelphia. Pope Francis will come to Philadelphia as part of his US trip. Paglia was asked if the Family meeting will  also  "be open for homosexual couples."  The  Vatican "Family Minister" said: "We follow the letter of the Instrumentum Laboris of the Synod. All may come, no one excluded. And if someone feels excluded, I leave the 99 sheep and get him."
"A neutral-sounding, but really slick turn of phrase," so says Riscossa Christiana. Despite "pastoral" embellishment, but without any addition, Paglia had thus signaled an acceptance of homosexuality. Given  Paglias previous homophilic comments, it's a signal he desires to send.
It's a recognition which stands in open contradiction to Catholic teaching.
Text: Giuseppe Nardi
Image: Corrispondenza Romana / Rorate Caeli
Trans: Tancred vekron99@hotmail.com
Link to Katholisches...
AMDG
Posted by Tancred at 7:04 PM

Ireland. Now Malta. Then on to Poland.


Don't expect kaput to be saying a word any more than Burke did when installed in Malta
http://www.usnews.com/news/offbeat/articles/2015/06/25/new-rainbow-crosswalks-support-philadelphias-lgbt-community

Msgr. Paglia does indeed "flash homophilic signals", including in the above photo by sporting shades (i.e., wearing sunglasses) with rainbow-colored frames.