Archbishop Apologizes for a Priest Doing His Job 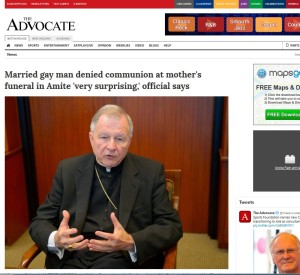 (New York) Tim Ardillo, an avowed aberrosexual "married" to another man,  is claiming that he was denied Communion at the funeral of his dead mother on July 10 in St. Helena's Church in the Diocese of Amite Baton Rouge (Louisiana).  Ardillo wanted to receive the Body of Christ in  Communion, however, he was denied by Pastor Mark Beard.
Them magazine The Advocate stated that the Diocese of Baton Rouge has since apologized to Ardillo for the incident, personally from the archbishop of New Orleans himself, Msgr. Gregory Aymond.
According to Ardillo, pastor Beard had justified his refusal with it because he was "not married in church." The presumed reason, according to the aberrosexual, was that he had previously said  in the obituary  for his mother he was described as being "married" to a man.
The Secretariat of Archbishop Aymond declined to comment. The apology was neither confirmed nor denied. No one from the parish wanted to take a position.

"Those who receive Holy Communion unworthily, commits a grave sin"

"The status of gays and lesbians in the Catholic Church is complicated because the Church rejects same-sex marriage, but respect for LGBT people is recommended," says the magazine The Advocate .
According to the American Bishops' Conference , according to The Advocate,  a "homosexual tendency" in itself is no sin, but a "homosexual act" is "always objectively sinful". People with a "homosexual inclination" should therefore not be encouraged, says the Bishops' Conference,  to talk openly about their passion, but seek help and confide in a spiritual support.  At the same time "any unjust discrimination against any person" should be rejected, which also applies to persons with a "homosexual inclination".
Whoever receives Communion without authorization, "is committing a grave sin," says the paper quoted the Bishops' Conference.

Diocese will not tolerate  denial of Communion, "just because someone is gay"

What this meant in practice, at least in the Diocese of Baton Rouge, said the diocesan press officer, Donna Carville, a communion assistant (Eucharistic Minister): The diocese will not tolerate refusal of Communion to Catholics, "just because they are gay."
It was "very surprising that Communion was denied. This does not work  ... We do not have people refuse communion. Who are we to judge whether they believe [the Church's teaching on Communion] or not? This is a matter between them and God," said Donna Carville.
It should not be used to deny the Eucharist, because someone is not married in Church, seconded the canon lawyer, Roger Keeler, coordinator of the Canon Law Society of America, and a priest of the Archdiocese of Edmonton in Alberta State (Canada). "The Communion is not a weapon. It is not a reward for good behavior. It is food for tired souls," said Keeler. The priest could not know the marital status of those who come forward for Communion.

"How should I know if someone is not in a state of grace?"

As an example, Keeler explained, he could have read somewhere that a woman has embezzled millions. But they could have previously atoned for everything: "How should I know if she is not in a state of grace," said Keeler. The difference is certainly significant because Ardillo himself announced on the spot and publicly, that he  lives in a "gay marriage".
Ardillo told the newspaper he would not go to Communion if the matter had been broached before the funeral mass for his mother. His mother is with the Holy Spirit, and he did want to connect through the communion with her.
After the incident, he took the hand of his "husband" and ran out of the church. A lesbian had then brought him back, mainly because he was the next of kin.
Ardillo lives in Indiana, as a boy he was an altar boy. He still believes in the Catholic faith, but was not sure  of his "place" in the Church. He prayed with his mother's rosary when they saw each other the last time.
But why did the Diocese of Baton Rouge and the archbishop of New Orleans  apologize for the denial of Communion?
Text: Giuseppe Nardi
Image: The Advocate (Screenshot)
Trans: Tancred vekron99@hotmail.com
Link to Katholisches...
AMDG

Horrific apostasy and sacrilege on display by another bishop. And the priest who does his minimal duty to prevent sacrilege and scandal and further mortal sin on the part of the soul in manifest obstinate mortal sin, is penalised and calumnied. This is the wicked face of apostasy helping souls to eternal damnation.

The Blessed Sacrement is not a " right " to be demanded ,and anyone who makes such a demand does not believe in the True Presence .People are been reprimanded for wanting to kneel out of reverence for the Eucharist ,bet they wont get any apologies by bishops .

Once again, it appears no one in the Church can read:

Can. 915 Those who have been excommunicated or interdicted after the imposition or declaration of the penalty and others obstinately persevering in manifest grave sin are not to be admitted to holy communion.

Can. 916 A person who is conscious of grave sin is not to celebrate Mass or receive the body of the Lord without previous sacramental confession unless there is a grave reason and there is no opportunity to confess; in this case the person is to remember the obligation to make an act of perfect contrition which includes the resolution of confessing as soon as possible.

Canon 915 applies to the Minister; canon 916 to the communicant. Both have an obligation in charity under the law to maintain the sanctity of the act of reception of Holy Communion.

Note the dishonesty of the argument "The Eucharist is not a weapon." I defy canon lawyer Fr. Keeler to name one priest who said or implied such.

In view of the Archbishop's apology it is worth recalling the words of Our Lord:

"For he that shall be ashamed of me, and of my words, in this adulterous and sinful generation: the Son of man also will be ashamed of him, when he shall come in the glory of his Father with the holy angels." Mark 8:38 and:

This is a public scandal, made public first (apparently) before the fact by the announcement in an obituary that this would-be-communicant was 'married' to a man and after the fact by publicising the fact through complaining to the media that he had been denied the Holy Eucharist.

Even for civilly divorced and remarried heterosexual couples who repent and undertake to live lives of absolute continence and chastity, the reception of the Holy Eucharist is forbidden except where reception will take place 'remoto scandolo'. - Familiaris Consortio

Of course, any aggrieved member of the Faithful can file a canonical appeal in respect of this matter. I would not, however, expect the result would be edifying.

To my mind, this priest, Pastor Mark Beard, has been publicly martyred in the media for his Faith and Fidelity to Jesus Christ, no different than martyrdom at the hands of ISIS.

Pray the Rosary every day. Things are coming to a head at dizzying speed now.

So with his apology did the Archbishop give the gay man in question holy communion?

So if an actively homosexual man, who is "married" to another man, should not be refused Holy Communion, then what is the Church's argument against homo "marriage"? The Diocese of New Orleans is concerned about offending man and not worried in the least about sacrilege against the Body and Blood of Our Lord.

Yes, once again, we have an apparently heretical bishop colluding with enemies of the a Church and of fundamental morality, in attacking a priest staying true to his sacred duty to God, and the subject soul and all the other affected souls. This is happening everywhere in all areas o Faith, morals and public life - heretical bishops or priests colluding with public enemies of God, in the persecution of the Faithful. Lord, save us!