Parents of St. Therese of Lisieux Will be Canonized During Bishops' Synod 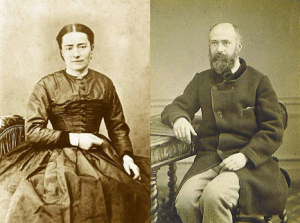 (Rome) Pope Francis has called  an ordinary Cardinal consistory to announce new Saints on June 27th. Among the new saints are included the French couple Louis and Zelie Martin, the parents of St. Therese of Lisieux.
The upcoming canonization of the parents of the popular saints will be officially confirmed. Pope Francis will make the Saints during the Synod of Bishops in October, as indicated by Cardinal Angelo Amato, prefect of the Congregation of Saints.
Rumors have it that  the Pope has the intention to set up relics of the holy married couple during the upcoming Synod of Bishops in the Synod Hall. A confirmation does not exist for the time being.

Zelie Martin, born Guerin lived from 1831-1877, and her husband Louis Martin from 1823 to 1894. The couple married in 1858, had nine children, all girls who had been baptized with  the name Maria in combination with a second name. All five children who reached adulthood, became nuns. Four sisters entered the Carmel of Lisieux, a fifth sister, Marie-Léonie was Salesian in Caen.
The youngest daughter of Mr. and Mrs. Matin, Marie-Françoise-Thérèse (1873-1897), was  Sister Therese of the Child Jesus and the Holy Face in the Carmelite Carmel of Lisieux. Better known as Therese of Lisieux's "Little Therese" in order to distinguish her from  St. Teresa of Avila.
In 1923   Pope Pius XI. beatified her and canonized her  in 1925. In 1927 she was named by the same pope, along with St Francis Xavier as patron of the universal mission. In 1997, Pope John Paul II., declared her, together with Teresa of Avila and Catherine of Siena. a Doctor of the Church. Pope Benedict XVI. finally signed the decree for the beatification of Therese's parents, which took place in Lisieux 19 October 2008.
Zelie and Louis Martin are the first married couple to be canonized without suffering martyrdom. Last March, Pope Francis recognized a scientifically inexplicable healing miracle attributed to the intercession of the couple.

A Founder and Religious Superiors as New Saints

At the Cardinal Consistory, Pope Francis will also announce the canonization of the Spanish nun Maria Isabella Salvat Romero (1926-1998), and the Italian priest Vincenzo Grossi (1845-1917). Mother Mary of the Most Pure Cross  was Superior General of the Hermanas de la Compañía de la Cruz de Sevilla (Sisters of the Company of the Cross). The Order with around 1,000 nurses and more than 50 houses operates in Spain, Argentina and Italy.
The priest Grossi founded in 1885 the Order of the Daughters dell'Oratorio (Sisters of the Oratorio), who particularly care for needy children and young people. The Order's name originated because of the main field of activity of the sisters and because the order was placed under the protection of St. Philip Neri. The Order today has approximately 230 sisters in 30 houses works in Italy, Argentina and Ecuador.
Text: Giuseppe Nardi
Image: ocdssacramento.org
Trans: Tancred vekron99@hotmail.com
Link to Katholisches....
AMDG
Posted by Tancred at 3:56 PM

it's the old 3 card monty distraction..hey look over here at shiny things, the parents of a saint, rightly being canonized as saints, meanwhile in the other hand..communion for remarried, easy divorce, etc etc etc.

There are a number of diverse topics that you can use in writing process essays, you can find a lot some ideas at the https://mastergrades.com/. While making the cover page for an essay is just about the simplest task you require to undertake while essay writing, it is likewise most likely the previous portion of your essay which requires attention, and which may be the reason you wind up making silly errors which look really bad once an examiner requires a look at your essay.