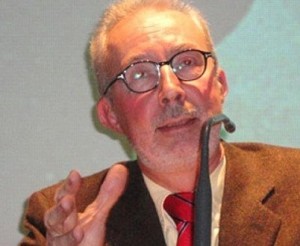 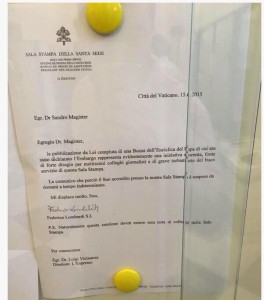 The letter from the Vatican Press Office, Vatican expert Sandro Magister of the is excluded
"Dear Dr. Magister,
the draft you caused to be released of the encyclical of the Pope, despite a publication ban being declared, is a manifestly incorrect initiative, and the source of great disturbance  for many fellow journalists and is a serious breakdown of the sound functioning of this Press Office.
I therefore wish to inform you that your accreditation is suspended from our press office from tomorrow, indefinitely.
I regret very much, your
Federico Lombadi SJ
NB: Of course, these sanctions must be made known to colleagues of the Press Office.
CC:
Dr. Luigi Vicinanza
Chief Editor L'Espresso "
Magister, who studied philosophy, theology and history at the Catholic University of Milan,  was the chief editor and consultant of the television station of the Italian Episcopal Conference TV2000.

The wrath of the other Vaticanists about Magister alone is remarkable. Nevertheless, some believe that Magister's involvement is inconvenient to someone in the Vatican. Vatican spokesman Lombardi explained the sanction with the objective certainty that  Magister had broken the publication embargo. This is exactly what  Magister denied to Associated Press. The editor of Espresso had decided to publish. He, Master, had only written a short introduction, which seemed necessary to him. It had no effect on the decision to publish it.
Magister is not the first journalist to whom  accreditation has been withdrawn. Nevertheless, sanctions are extremely rare.  All the more intensified is the impression that the incident had offered someone a welcome opportunity to punish the most influential critics of Pope Francis among Vaticanists in front of everyone. That Pope Francis is resentful, is sufficiently well known. The withdrawal of accreditation at the Holy See Press Office removes the ground from under  Vaticanist's work.  A step, that's for sure, which came as a surprise even for Magister.
"The new despotism in Vatican claims another victim" said Chiesa e postconcilio on Magister's ouster, who is described as "incorruptible and really a Catholic." "The new compassion in action in this case,  would be laughable to ridicule, if it wwere not so worrying," said the traditional website.
Text: Giuseppe Nardi
Image: InfoVaticana
Trans: Tancred verkon99@hotmail.com
Link to Katholisches...
AMDG
Posted by Tancred at 8:25 PM

Like Voris says, "The Church of Nice ain't so nice."

Now my point: If an encyclical teaches what is true, and what is true is eternal, so what if the thing was leaked?

If this is True then I say Well Done! Any Criticism of The Holy Father and you're out, you're either Faithful to the Pontiff or you're a Heretic. I Applaud that this man was shown the door.

Magister has the promising future of a Kamikaze.

No thanks! I'd rather read the definitive document before any leaked version.

Things really are in the toilet these days. What a mistake for Benedict to resign and for the voting cardinals to elect who was perceived as the complete opposite.

But no mercy for leakers!!!

you're no better than a mahoundian...you worship a man (and I don't mean the God-man).

Even the secular media "gets it".

I wonder if anti-Christian mouthpieces like Sylvia Poggoli or Thomas Reese SJ have credentials.

Tolerance for any critic or even questioner is not to be had while all sorts of behind the scenes plotting goes on. Progressives, even sodomites, can breathe easy but the orthodox must be wary for any excuse to bring them down will be applied. There is little truth coming from Rome these days.

We are witnessing a veritable reign of terror in Rome today. Not even the few corrupt popes and hierarchs of the late middle ages and the Renaissance could match the machiavellian ethos of today's Rome and of this miserable pontiff in particular. But, when you think calmly about it, it's really to be expected: leftists are generally ruthless and tyrannical, so convinced are they in their narrow view of the world and abysmal ignorance of the infallibility of anything they say or think or support. The hubris is truly breathtaking and diabolical. There should be an open rebellion from the laity and both the high and lower clergy against the despot in the polyester white cassock. Never before in recent history has the dignity of the Church and of baptized Catholics been so trampled upon as it is today. The word "scandal" does not begin to describe it; systematic "sacrilige" (the use of a holy object or office for unworthy purposes) is closer to the reality. RC

Except that it was his editors that did this, not Magister.

I could understand revoking all credentials for L'Espresso over this. But just singling out Magister seems to miss the target.

It's obviously a pretext. It wasn't even clear that there was an embargo period.

Why were journalists given a draft of it in the first place?

Nobody knows where the document came from, but "conservatives" in the Vatican are being blamed, apparently.

The ghostwriter behind the heavily discussed encyclical is one Archbishop Victor Manuel Fernández of Tiburnia, a native of Buenos Aires. Archbishop Fernández, who belongs to Pope Francis' inner circle in the position of most trusted theological adviser, was already heavily involved in the writing of Evangelii gaudium, and spent the Summer of 2013 in Rome for that purpose. Last March, as Pope Francis set about to compose his Eco-Encyclical, Archbishop Fernández was again flown in to do the heavy lifting. The close working relationship apparently stretches back to the time when Pope Francis was still Archbishop Jorge Bergoglio of Buenos Aires, with Fernández working largely behind the scenes, drafting the future Pontiff's important speeches and letters.

"I saw a great power rise up against the Church. It plundered, devastated, and threw into confusion and disorder the vine of the Lord, having it trampled underfoot by the people and holding it up to ridicule by all nations. Having vilified celibacy and oppressed the priesthood, it had the effrontery to confiscate the Church's property and to arrogate to itself the powers of the Holy Father, whose person and whose laws it held in contempt. " - Jeanne le Royer (Sister of the Nativity).

St. Paul is a heretic burning in the depths of hell for criticizing Pope St. Peter. How dare he!? The pope is the 4th person of the Holy Trinity! All hail the immaculate pope, the man who is God himself! Let us burn new-born babies for Francis our god (but not the ones with same-sex attraction, they are not to be judged).

So Magister is personae non gratia, but Schnellnhuber is now admitted to the Pontifical Academy of Science. What's wrong with this picture???