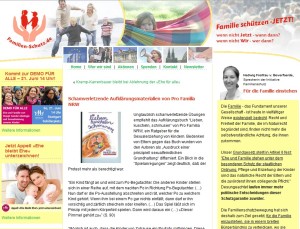 The Pro Familia website accordingly states, "Cooperation with the European Parliament and the European Council; Cooperation with relevant UN agencies (e.g. World Health Organization); Forming alliances with international lobbying organizations." In fact, Pro Familia is mainly financed with taxpayers' money and is therefore seen as an extension of politics, perceives activities that are required by  policy, although, however, outsourced to private associations, because they are controversial in the population.
The content of the publication "Love, Snuggle, Cuddle" reveals the shameful destructive intent of Pro Familia. The Initiative Familenschutz [Defense of the Family Initiative] cites the following examples:
"The child begins and becomes the butt-assessor. The other children will stand in a row, with the bare bottom towards the butt-assessors. (...) Now he can pace off the butt exhibition and state which butt belongs to which child. If it nothing occurs to him at a butt, then he must carefully and tenderly stroke or pinching it. (...) The game can be played in principle with any body part. Then it becomes a (...) This willy belongs to '' (page 90)
"It is also possible that the children can bring a butt photo from home. These are then distributed all and  jointly discuss which butt belongs to which child." (page 90).
"Ask the children to move around the room like dogs and sniff each other and smell." - See figure: One child is to hold the rump of another child in the face and fart in it."(page 84).
"'Papa-Mama-images': The children paint the genitals and body regions of their parents in their body contours. After that can be compared to the self with his aunt, the grandfather, etc. "- see figure (page 79).
The citations prove what kind of people the authors and the organization that is hiding behind the euphemistic name Pro Familia.
Backgrounds and relationships between pedophilia and (state)  sex education as well as between sex education and abortion illuminate the following products: Pedophilia and School Sex Education ; School Sex Education? A product of the Pedophile Lobby and Confessions of an Ex-abortionist: It all starts with sex education in school.
Text: Giuseppe Nardi
Image: familien-schutz.de
Trans: Tancred vekron99@hotmail.com
Link to Katholisches...
AMDG
Posted by Tancred at 5:47 PM

utterly, utterly, utterly satanic! demons teaching children....how on earth are parents allowing this to happen to their children?....honestly. I would go to my death before I would let someone corrupt the innocence of my child like that. What is wrong with the world???

I think you did an awesome job explaining it. Sure beats having to research it on my own. Thanks Education Details Online