Global Warming Skeptic Uninvited to Give Input for Eco-Encyclical 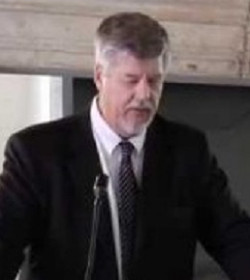 (Rome) A French climatologist who is one of the well-known climate skeptics and  presented a scientifically acclaimed book on  solar activity in 2014 was to attend the climate meeting in the Vatican, organized for the end of last April by the Pontifical Academy of Sciences. Despite assurances to the contrary by Cardinal Turkson, he was refused entry.
The scientist Philippe de Larminat, first a university professor in Nantes, then in Rennes, had heard of the Vatican Conference "Protect the Earth, Dignify Humanity", which took place on April 28 at the Vatican. De Larminat is one of the most original thinkers among the climate skeptics. In his book "Changement Climatique" he presents the thesis that solar activity has far greater influence on the global climate, than it could ever experience from man.  A meeting at the Vatican on the subject and given the announced professional level, naturally had to arouse the interest of the scientist, as the Washington Post reported. De Larminat signed up for the meeting and bought a ticket for the flight from Paris to Rome. However, five days before the conference started, he received an electronically transmitted message that there was no place for him.

De Larminats book on the solar activity
As the scientist learned, other colleagues fared no better. The Pontifical Academy of Sciences sifted all the climate skeptics out from the registered researchers with great zeal. "They didn't  want to hear any other opinion," de Larminat told the Washington Post .
Apparently, the only opinion heard was that  of the representatives for a man-made Global Warming hypothesis. Dissenting opinions or even a scientific discourse do not seem to have been desirable from the outset. The meeting was to serve as a prelude for the Pope Francis eco-encyclical.
The focus should not be so attached to the literal content of the encyclical, because paper is patient, but on the connections, Connections, that have come into existence by this document. Who wanted what from the Pope in advance  and what did he achieve in what he set out to do? Above all: Where was it conceived that  the Holy See would offer no resistance in the future within the framework of international institutions? It was the Vatican, whose delegation in the past more than 20 years,  forging coalitions among the States for the right to life and protection of the family, against abortion and overpopulation ideology.

De Larminat had a friendly encounter last March  with Cardinal Peter Turkson, President of the Pontifical Council for Justice and Peace, who was officially in charge of the preparation of the eco-encyclical. Cardinal Turkson was also to present "Laudato Si"  on June 18 to the world public. In the presence of two other people, Cardinal Turkson assured the French scientist, he would have enough space to present his theses at the meeting in April.
The chancellor of the Pontifical Academy of Sciences , Bishop Marcel Sanchez Sorondo, who is the real organizer of the  Holy See's approach to the man made Global Warming hypothesis, however, spectacularly  blocked any critical opinion. On April 17, he decreed an explicit veto of de Laminat's  participation at the Vatican meeting.
Some prominent conservatives, especially economic and natural scientists were contacted during the preparation of eco-encyclical from the Vatican and asked for their contribution. "Many, however, experienced a shock" when  after the presentation of Laudato Si  they had to say, "that none of their contributions were taken into account" as  Raymond Arroyo, the chief editor of the Catholic broadcaster EWTN, explained.
Text: Giuseppe Nardi
Image: InfoVaticana
Trans: Tancred verkon99@hotmail.com
Link to Katholisches...
AMDG
Posted by Tancred at 7:29 AM