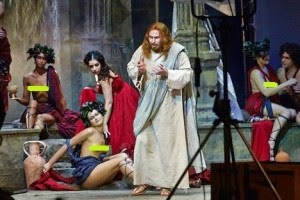 (Moscow) The director's theater can sometimes spoil  the full musical experience in an opera house. Theater managers  and directors who put themselves in scene and trample over music, composer, librettist and their intentions with the "lightness" of elephants in a magnificent rose garden.
Actually the Russian Novosibirsk with a wanted to honor the Tannhäuser of Richard Wagner with an adaptation. But the theater director Timothy Kuljabin intended to deface the "most Catholic" of Wagner operas with a "Jesus-sex scene" (Die Welt). The redemption theme in conjunction with the Catholic Church is difficult for a disbelieving director to do.  Intellectual honesty would require one  to refuse a commission with which you can not identify. In general, the artist director decided not to do without, but to enjoy himself  by the "deconstruction" of the works.
After protests from the audience and the Orthodox Church, the Novosibirsk  cancelled the staging  and dismissed theater director Boris Mesdritsch. He had defended Kuljabins sacrilege and refused to publicly apologize for offending religious feelings.

Is there a "right" to blasphemy?

Kuljabin presents himself remains unapologetic and complained of the "right" to offend God, religion and the religious feelings of Christians. A charge of blasphemy was rejected in a court in Novosibirsk.
Since then, Kuljabin has portrayed himself as a defender of  "common sense" and as a victim of "ultra-radicalism", "censorship" and "paternalism". Doubts about Kuljabins common sense abound.
The daily Die Welt  immediately aligned itself on the side of "artistic freedom" and denounced critics of blasphemy and Tannhäuser  together as "militant Orthodox activists". In no time there were well-known alliances of the liberal left-crowd and old-communist cliques to defend an egocentric "freedom". 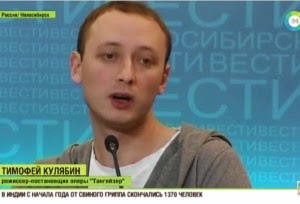 Timothy Kuljabin
The 30-year Kuljabin  Tannhäuser scandal was indeed known  to Russia insiders, but outside he was unknown.  Since  presenting his blasphemy on stage, he has mutated overnight into a "star" for the German culture journalist. The features section of the Frankfurter Allgemeine Zeitung made ​​him even the "much celebrated young star ".
What catapulted Kuljabin  to media darling, is Tannhäuser, which comes from the   film "Venus Grotto" about Jesus in a brothel. Tannhäuser is the film director, Jesus one of the actors, who is surrounded by half-naked prostitutes. The advertising promoting the production shows  Jesus between two woman legs on a large movie poster.

Metropolitan Tikhon of Novosibirsk initiated a charge last February for blasphemy. The lower court judge ruled on the side of director and artistic director, and decreed that religious symbols have been used in "artistic context".
Mesdritsch offered the Archbishop a public debate on Kuljabins Tannhäuser adaptation. Metropolitan Tikhon felt duped and sent a letter to the Governor of Nowosibrisk. In the letter, he explained that a public debate only makes sense if the performance in the current production is to be suspended.

Christians gathered in front of the Opera House in protest and prayer. The new director of Novosibirsk was the artistic director of the St. Petersburg Mikhailovsky Theatre, Vladimir Kechman. Kechman had a week-long discussion  on Kuljabin's Tannhäuser blasphemy and criticized him for it. There was no cause for government art programs to insult people and to serve as a stage for the self-promotion of individuals.
The Lenkom- and the Bolshoi Theatre in Moscow however, have offered Kuljabin the opportunity to be able to produce on their stages "what he wants". This too is a form of defending "freedom of art" or in other words to express the aversion to Christianity.
Text: Giuseppe Nardi
Picture: Channel 24 (Screenshots)
Trans: Tancred vekron99@hotmail.com
Link to Katholisches...
AMDG

It is as though hell and its demons have been unleashed all around us...everything is on fire. This is the work of a soul given over to demonic possession, and we see it multiplied myriad times over across the globe. The Mystical Body must be well within the throes of the Passion now....

for "this is your hour, and the power of darkness"..."look up and raise your heads, for your redemption is drawing near".

"Jesus Christ, Superstar" or "The Last Temptation of Christ' for millenials, I guess. Seems this act has to be reconstituted and recycled every so often, but no one wants to buy admission any longer.