Cardinal Sarah: "Rediscover the Sacrality in the Holy Mass" 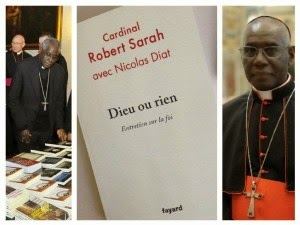 (Rome) In his interview book "Dieu ou rien" (God or nothing) the new Prefect of the Congregation for Divine Worship, Cardinal Robert Sarah, also took a position on  the Motu Proprio Summorum Pontificum of Pope Benedict XVI.. The French traditional information service Paix liturgique published the statements in his "Letter 65".
Paix liturgique had welcomed the appointment of Cardinal from Guinea to succeed Cardinal Canizares in the fall of 2014.  Now the information service writes:

Cardinal Chose Birituelle Paris Parish to Talk About the Liturgy

"In early March 2015 Cardinal Robert Sarah, Prefect of the Roman Congregation for Divine Worship and the Discipline of the Sacraments remained for a long time in Paris and the surrounding area  in order to consult on  the resultant interview book, "God or Nothing"  with the journalist Nicolas Dat" (Fayard). The book paints a personal and surprising portrait of one of the most discreet and yet most important prelates of this pontificate.
While there are a large number of events  attended to by the book, the Cardinal wanted to devote a considerable part of his time not the media, but the faithful. He visited several parishes. In each he took on a specific topic of his book. This included the liturgy, precisely about which he spoke  in the parish of Saint-Eugène-Sainte Cécile, in which both Rites have been celebrated for 30 years," says  Paix liturgique. The following is an excerpt of the liturgy part of Cardinal Sarah's book.

Joy and Gratitude for Summorum Pontificum

"Personally, I have received Summorum Pontificum with great confidence, joy and gratitude. It is the sign and proof of how the Church, mother and teacher, look at all the faithful, by taking into account all the sensitivities. Benedict XVI. wanted to support the wealth of different spiritual expressions in the belief that they will lead to the Church to true unity and an ever brighter scope for  the holiness of the Church.
I think that this beautiful motu proprio fits perfectly within the bounds of the Council Fathers furrow. Therefore, we can not pretend we have forgotten what was declared expressly in Sacrosanctum Concilium: "For the liturgy contains as a divine institution immutable parts and parts which are subject to change. These parts may change over time, or even if something should  have crept into it, that it doesn't affect the inner nature of the liturgy less than if they have been found to be less suitable or equivalent."
In the letter Summorum Pontificum accompanied Benedict XVI wrote .:

For that matter, the two Forms of the usage of the Roman Rite can be mutually enriching: new Saints and some of the new Prefaces can and should be inserted in the old Missal. The "Ecclesia Dei" Commission, in contact with various bodies devoted to the usus antiquior, will study the practical possibilities in this regard. The celebration of the Mass according to the Missal of Paul VI will be able to demonstrate, more powerfully than has been the case hitherto, the sacrality which attracts many people to the former usage. The most sure guarantee that the Missal of Paul VI can unite parish communities and be loved by them consists in its being celebrated with great reverence in harmony with the liturgical directives. This will bring out the spiritual richness and the theological depth of this Missal.

It is likely that we can better understand the celebration of the Mass according to the Missal of the old Mass as an act of Christ and not of men. Thus the  mysterious and mystagogical character is also  perceptible. Even if we actively participate in the Mass, it is not about our action, but  those of Christ. In his Apostolic Letter Quintus Annus Vicesimus. John Paul II asks wherein lies  active participation.

But what is this active participation? What must you do? Unfortunately, the word was very quickly misunderstood to mean something external, entailing a need for general activity, as if as many people as possible, as often as possible, should be visibly engaged in action.  However, the world "part-icipation" refers to principal action in which everyone has a "part".  And so if we want to discover the kind of doing that active participation involves, we need, first of all, to determine what this central actio  is in which all the members of the community are supposed to participate. The study of the liturgical sources provides an answer that at first may surprise us, though, in the light of the biblical foundations considered in the first part, it is quite self-evident.  By the actio nd the need for a general acting out derived therefrom, as if as many as possible as often as possible must be visible to all go into action. But the word "participation" (or "participation '' refers to a main plot, in which all are part-have. So if you want to find out about which actions to do it, then you have to determine first of all, that because these actual central "actio" is, to which would also involve all members of the community [...] Under the actio of the liturgy refers its  sources, the Eucharistic Prayer. [...] The real liturgical action, the true liturgical act, is the oratio -.. the great prayer, which forms the core of the Eucharist which was therefore described by the Fathers as oratio ... .This oratio- the Eucharistic Prayer, the "canon" - is really more than speech is actio in the highest sense, because it happens that human actio (as they had hitherto been practiced by the priests in the various religions) withdraws and gives room for the actio divina, the action of God (Joseph Cardinal Ratzinger. The Spirit of the Liturgy, Herder, 6.Aufl, Freiburg im Breisgau 2002, S. 147f).

The Motu Proprio Summorum Pontificum tries to reconcile the two forms of the Roman Rite and tries above all to help us to rediscover the sacredness of the Holy Mass as an act of God and not of man. Here we touch upon a really important point. The problem of widespread indiscipline, lack of respect and loyalty to the Rite,  may even attack the validity of the sacrament."
Excerpt from Robert Cardinal Sarah: Dieu ou rien, Fayard, Paris 2015, pp 400-402
Text: Giuseppe Nardi
image: MiL\
Trans: Tancred vekron99@hotmail.com
Link to Katholisches...
AMDG
Posted by Tancred at 5:22 PM

Unsigned and irrelevant to the op.

Can anyone tell me why no one in the Vatican 2 church can't celebrate the 1955 tridentine mass?I ask this in sincere curiousity.St.Joseph isn't included in the Canon,the Confiteor is recited before communion,and every mass begins with Asperges me Domine in the 1955 mass.Please if someone could me why this mass isn't allowed I would greatly appreciate it,honestly.I am not being sarcastic just curious.For a fact I know only the 1962 mass is allowed in the motu proprio.thank you.