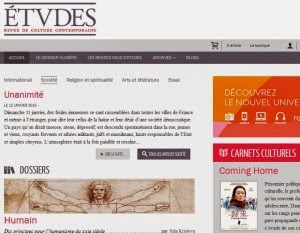 (Paris), the French Jesuit journal Études published, in "solidarity" with the victims of the attack in Paris, anti-Catholic cartoons of the radical left-wing satirical weekly Charlie Hebdo. In contrast, the Jesuit Father Jean-François Thomas took objection.
"I have no illusions about the effect of my protest, but I still want him to put it forward, because I know that a considerable part of the Jesuits in my community feels the same, but can not express or does not dare to express."  With these words Father Thomas, a French Jesuit, began  a letter which he sent to the competent religious superiors to protest against the Jesuit magazine Études.

The solidarity with the victims of the attack on Paris during these  days of highest media coverage, is yielding strange blooms.  Catholic voices warn of false solidarity with the anti-Christian ideology of radical left-wing blade.
Unlimited, however, is the "solidarity" of the Jesuit magazine Études who made ​​the decision to reprint "some cartoons relating to the Catholic Church."  This magazine will show their "solidarity with our brothers and  the other victims who were  murdered," they said.
One of the four printed Charlie Hebdo-cartoons shows the crucified Jesus, asking "to remove the nails," so that he could take part in the conclave. Another cartoon was a salute to and  editorial about the resignation of Pope Benedict XVI. It shows the Pope in homosexual outfit saying, "Free at last". The Jesuit magazine did not publish the most blasphemous among all the anti-Christian Charlie Hebdo cartoons, those against the Holy Trinity. We do not even wish to give words to this representation.

"We share, so I hope at least, not the 'values' of this weekly newspaper," writes Father Thomas. "The horror of the attack can not" make us forget that "freedom of expression is not a freedom to insult   believers daily and even to blaspheme God." The Jesuit insists that "there is no anti-blasphemy law" needed, but "some common sense, good taste and a little bit more respect." Humor, even "unpleasant, can make you laugh," but vulgarity, "which is made absolute, is truly lamentable and causes only new hatred and still attracts more hate."

The Society of Jesus is not Charlie Hebdo

The last issue before the assassination speaks volumes. It bristles with cartoons against God, Mary and the birth of Jesus. It is debatable to be able to publish blasphemies against the "right" of the satire newspaper.  "But a Jesuit magazine  who does these things is an outrage. The most heinous is that against Benedict XVI. The ridicule of the drama of the crucifixion is pathetic. I never thought that certain Jesuits could laugh at something like this. Personally, I cry every day because of my sins and because of the suffering of Christians, many persecuted by the editors of Études, have been not nearly defended with the same zeal," said Father Thomas.
Études has been in publication since 1856 and today carries the subtitle "magazine for contemporary culture." The editor since 2013 is the theologian and physicist Father François EUVE SJ. Father EUVE is the holder of Teilhard de Chardin-Chair at the Centre Sèvres, the Jesuit College of Paris. The Chair is funded and awarded by the Fondation Teilhard de Chardin.The Foundation was founded in 1962 and owns the copyright to all the writings of the late Jesuit Pierre Teilhard de Chardin (+1955) and the Muséum National d'Histoire Naturelle located in Paris.
Text: Giuseppe Nardi
image: Études
Trans: Tancred vekron99@hotmail.com
Link to Katholisches...
AMDG

How many Jesuits are left in France?. Three or Four? LOL!!!!!

I'm surprised they're able to use the internet! The average Jesuit in France looks older than an Egyptian mummy.

Was that what it was? I thought it was a deflated life raft or some other type of hazardous material warning suit...

I guess the Jesuits published anti-Catholic cartoons to demonstrate their fearlessness in the face of Papist mobs who go berserk and kill people over such things. What courage!

I hate to be crude but really I can't think of anything more charitable to say: Would the Jesuits please just foff? Nobody is interested, go up to Mount Graham and watch for little green men.

Absolutely disgusting. Various 'sayings' come to mind.... Like 'birds and nests', and 'enemies and friends'. Worse implication these Jesuits are setting up is that if we Catholics don't trash our own faith, are we then 'not Charlie'.

The Jesuits who find these acts of their brothers vile should take them to court. Let's see if the French court will prosecute the Hebdo magazine for blaspheming Catholicism and hold up the good Fathers rights. Put the French judicial system on trial. I realise that 'blasphemy laws' can be controversial but in 2009, "Maurice Sinet, 80, who works under the pen name Sine, faces charges of "inciting racial hatred""(The Telegraph), for making comments about Mr Sarkozy's son marrying a Jewish heiress. Is trashing the Catholic Church the same as "racial hatred". But then how far do Catholics have rights under the 1905 Separation of Church and State Act under France's laïcité? If the French government were to be left-wing and anti=clerical hypothetically, is that not a concern for 'freedom of speech' anyway?

Come to think about it, what about Canon Law? With regards to the Jesuit Order, what recourses to the good Jesuit Fathers have within their own Jesuit Order or the Church's Ecclesiastical Court for that matter?

Is there any point of having recourse to secular law courts if our own Church doesn't sort out its own garbage?

Our Lady of Good Success warned the last 50 years would happen.We are most likely on the last year's of the great apostasy.

Charlie can blast,mock & ridicule catholicism!However do not question the holocaust!People literally go to prison for merely questioning the Holocaust in Europe.Now you tell me who controls Europe?

Blasphemy has been legal in France since 1789 (ironically the one area of France formerly controlled by Germany--Alsace--does have a German law on the books ...). There is a difference between blasphemy and inciting to hatred which is against French law. There is a difference between mocking an official of the church, for example, or Christ or Buddha or...and mocking 'the Jew', the 'muslim'....and if you think it is acceptable to get more angry over a darned picture --a picture- than over the killings of Nigerians by Boko Haram, or kidnapping of girls (let's not get into discussing public floggings because we still have the death penalty in the States) or over the Holocaust which yes, did happen dear, then that is pretty sad.