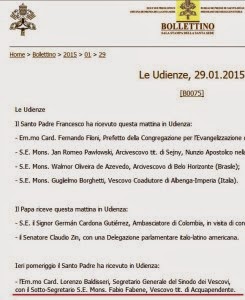 (Rome) On January 28, Pope Francis has received the General of the Synod of Bishops , Cardinal Lorenzo Baldisseri in audience. He was received with   the Under Secretary of the Synod of Bishops, Curia Bishop Fabio Fabene. Baldisseri was before his appointment and being made Cardinal, Secretary of the College of Cardinals, Fabene was Deputy Bureau Chief of the Secretariat of the College of Cardinals.
Today, Friday, the President of  the Pontifical Council for the Family, Archbishop Vincenzo Paglia Curia, was received in audience.
From 22th-24th January a Conference was held in advance of the Synod of Bishops on the family for next October in Rome. The Pontifical Council on Family had invited more than 80 of the world's most important Catholic laymen in the family area. The declared aim was to hear the opinion of lay representatives on the subject of the Synod. Cardinal Baldisseri was also present.
Unlike what was evidently expected, the lay movements almost unanimously rejected from the "new family" agenda of the Kasper-line. This provoked a violent slugfest between the angry Cardinal Baldisseri and lay representatives.
Neither the Pontifical Council on Family, the General Secretariat of the Synod of Bishops nor the Press Office of the Vatican published an explanation after. Following the official Vatican pronouncements, one might get the impression that the meeting never took place.
The audiences for Cardinal Baldisseri, Curial Bishop Fabene and Curial Archbishop Paglia were in connection with the preparation of the final Synod of Bishops on the Family. The Curia representatives meeting  Pope Francis, apparently  were to inform him, inter alia, on the course of the conference with the lay movements.
Text: Giuseppe Nardi
image: vatican.va (screenshot)
Trans: Tancred vekron99@hotmail.com
Link to Katholisches...
AMDG
Posted by Tancred at 9:21 AM

Breaking news: Pope Francis said he is the devil...yes he said it.!!!

Pope Francis: Read Robert Hugh Benson’s Lord of the World to understand me.

THE Pope has urged anyone who wants to understand him to read a science fiction novel published in 1907 by Robert Hugh Benson, an Etonian author who also specialised in ghost stories and counted an eccentric gay novelist as literary mentor.

I think the Paglia that counts-- the brainy one, Camille, the American lesbian atheist professor-- would have more than heartily approved of the laymen, or at least more so than her namesake.