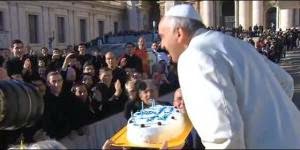 (Buenos Aires / Rome) Today December 17 Pope Francis celebrates his 78th birthday. In the morning he enjoyed a tango that was danced by thousands of  "aficionados" in his honor in St. Peter's Square. The Osservatore Romano published a page from the Pope's biography appearing in Argentina, which lays particular value on the Jorge Mario Bergoglio  and the conclusion and signing in his own hand.
The book entitled Aquel Francisco was written by two Argentine journalists, Javier Cámara and Sebastian Pfaffen (see separate report  Bergoglio as "Brilliant but Crazy" Was Sent Into "Exile" ). Both come from Cordoba in Argentina, where the publisher is located. The focus of the book lies in the reconstruction of the two phases in the life of the current Pope, which he spent in  a provincial Argentine town. These were the two years of the novitiate of 1958-1960 and the two years of exile without any appointment, to which he had been sent by his Superiors 1990-1992. An exile, which Pope Bergoglio today often referred to as an "internal cleansing". 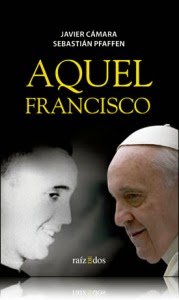 In December 2013, the Pope had been informed by the Archbishop of Cordoba during a visit to Rome, that the two journalists were going to write a book about this double period. Pope Francis picked up the phone and called the two."Not once, but several times, and would not let his grip loose.," said Vatican expert Sandro Magister about the episode. The Pope began and intense correspondence via e-mail with Cámara and Pfaffen, describing his memories and makinng the biography  a kind of autobiography. From an "autobiografia Cordobana" says Magister, since the book is peppered with direct statements in quotes. It deals with stories and appraisals.
"There are two main points of the book which arouse curiosity," says Magister. This applies initially to the real reasons that led to the fact that the former Argentine Jesuit Superior  Bergoglio fell out of favor with his brothers.  The current Pope was at the head of the Jesuits in Argentina in the 70s, to be exact 1973-1979. He was sent into exile in 1990 by Father Victor Zorzin,  who was close to Father Bergoglio. Father Zorzin was namely Bergoglio's Vice, when he was  Order Provincial. In 1986 Zorzin was elected  Provincial. It's an office which he held until 1991.

Why Did Bergolio's Brethren Want to Get Rid of Him?

Between Zorzin and Bergoglio  there were great differences of opinion about the nature of religious leadership. The same was true between Bergoglio and Zorzin's successor, Father Ignacio García-Mata, who was Provincial from 1991-1997 Provincial and thus for  a time when Bergoglio was already progressing in a new career outside of his order. It was in  1992 that Pope John Paul II appointed him  Auxiliary Bishop of Buenos Aires, and in 1997, Archbishop Coadjutor, eight months later, and finally in February 1998, as archbishop of Buenos Aires and Primate of Argentina.
According to the two authors there were  internal disagreements in the order which resulted in a thunderous "smear campaign" against Father Bergoglio. A campaign whose echo was heard as far as Rome and penetrated to the former General of the Order, the Dutchman Peter Hans Kolvenbach. They had the rumor circulated, as such, but Father Angel Rossi, the current Superior of the Jesuits branch in Cordoba confirmed in a book that the "once so brilliant"  Ex-Provincial had been exiled,  "because he had become sick, crazy.'

In 1979, there followed  Provincial Bergolio, Father Andrés Swinnen, who remained always connected to his predecessor, provides a more substantial explanation of exile. Bergoglios  "sin" was   that after his mandate as Provincial ended, he continued as leader of a faction   within the province of the order and tried to exert influence.
First they had made him the rector of the Colegio Maximo de San Miguel. Then he was sent to the doctoral program in Germany. But in Frankfurt he stayed only briefly. In the few months that he was in Germany, he traveled extensively and visited the various branches Jesuits. They had tried to deport him from Argentina. This also explains the reason why he never came to the official residence to study, but after a short time he succeeded in returning to his homeland. Now he was sent to the Colegio del Salvador where he taught theology. But for whatever reason he was also sent there, he joined "as a parallel-head", said Father Swinnen. In this way he influenced many Jesuits, especially younger brothers. Within a decade, from 1979, the end of Bergoglios term as Provincial, until his exile in 1990  more than 100 young Jesuits left the Argentine Jesuit Order and gave up their  priesthood.

Exodus from the Order, For Which Bergoglio Was Blamed

The Exodus was blamed on Bergoglio. A "large part  of those exiting belonged to  a group who were not on  Bergoglio's page, but rather wanted to get rid of him," said Father Swinnen. Whether at his side or against him, the former Provincial played a central role in the province's internal conflict.
The book provides no detailed background information about the reasons of the conflict. Was it only in the personality  of Bergoglio and other actors, or it was about substantive issues of doctrine and church order? Neither the reigning pope nor Jesuits cited in the book seem to want to "warm up" to the former controversies that led to such a tangible conflict.

So far, it is known that Pope Francis has written a book in his life. His written legacy is limited to shorter posts and forewords for some books of others, as well as two brochures  that appeared after he became the opponent  of Joseph Ratzinger in the conclave of 2005. Even at this time as archbishop of Buenos Aires, he made ​​use of Manuel Fernandez as a ghostwriter . He made ​​him rector of the Pontifical University of Buenos Aires, Titular Archbishop,  Synod of Bishops on the family and the official papal lyricist. Even the Apostolic Exhortation Evangelii Gaudium comes largely from his pen. This is not unusual for statesmen and leaders in.
All the more surprising that Pope Francis says in the book that you wrote in his exile Cordobaner two books. The books are entitled "Reflexiones de esperanza" (Thoughts on hope) and especially "Corrupción y pecado" (corruption and sin) and my brochures. The latter took his text output because of a tragedy, the murder of a 17-year-old in 1990 by members of high society 2014 he also appeared in German translation.

"Corruption" is a topic that Pope Francis addresses in his sermons over and over again. The Catholic Church leader is said to have resumed the study of Romano Guardini in exile, to complete his dissertation on the German religious philosopher. "I did not manage to finish it, but this study has helped me a lot in what later came to me, including the transcript of the Apostolic Exhortation Evangelii Gaudium , part of which is taken on the social criteria entirely of my thesis about Guardini ".
The never completed dissertation is not known, but in Evangelii gaudium there is actually a detailed quote by Guardini from his work published in 1950, "The End of Modern Times". The quote is found in paragraphs 217-237, where the Pope sets out the criteria that should be followed in order to advance the promotion of the common good and social peace.
To what extent his style of leadership, whether as a provincial and "parallel-superior" then  as archbishop or pope are  in relation to Guardini's criteria, would require a separate investigation.
Text: Settimo Cielo / Giuseppe Nardi
image: MiL
TransL Tancred vekron99@hotmail.com
Link to Katholisches...
AMDG
Posted by Tancred at 8:50 PM

Oh yes. All the earmarks of a most humble person. Not at all a psychotic dope of a Marxist with an agenda of evil.

Rotten stuff in Argentina.....please, don't say anymore that the Holy Spirit is in papal elections, it won't be honest, remember the raven and the dove.....

Maybe there will be another Pope Emeritus soon, very, very soon.

Anyone know if he is even a valid priest? Was He ordained the pre-june 1968 rite?

No, he was ordained afte that date.
RR

So we have the first "Pope" who isn't even a valid priest.Ratzinger was the first who wasn't a valid bishop.Before I left the local indult for a true catholic church,I vividly remember not going for communion at my last mass.The entire time during communion It didn't feel like mass.I had studied the invalid Paul VI rite of holy orders.The one answer I can't find on the subject is why he (Paul VI) changed the rite of holy orders.

The New Rite is undoubtedly valid. The Church has always taught that in cases of doubt the Sacraments are to be considered valid. The Church is not a dictator, it is a mother. The Church is not Adolf Hitler, it is the Blessed Virgin Mary. Christ would never abandon His flock. Christ would never abandon Roman Catholics in China or Africa who only have access to the NO. Why in the world would Christ allow a few thousand SV's, the majority of whom are Americans, to keep the truth while the hundreds of millions of Roman Catholics in third world or dictatorial governments suffer? That's not Christ the Shepherd, that sounds more like Satan.

Just because your last NO Mass "felt" invalid doesn't mean anything. Personal feelings mean nothing, the Oratorians sometimes say Latin NO Masses that are more majestic then certain TLM's I've been to. Some TLM priests can make their Mass extremely rushed, monotone, and dry - that doesn't make or break the Sacrament being valid.

Canon Lawyer on the Validity/Invalidity of the Novus Ordo Sacraments
https://www.youtube.com/watch?v=2gPX7XEBdUQ

Thank you. I usually just delete off topic Sede nonsense.

MattMarriott said...
This comment has been removed by a blog administrator.
December 20, 2014 at 5:47 PM

One must resist a pope who is openly destroying the church -; Cajetan

$20 says Jorge is a Sephardic Jew.