Ordinarium Missae of the Traditional Ambrosian Rite is Here 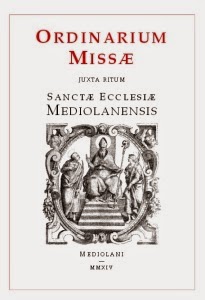 (Milan) From the traditional cultural club Signum Ambrosianum  has just now published the Ordinarium Missae  in the traditional form of the Ambrosian Rite.The Archdiocese of Milan gave the imprimatur .
A simple printed Latin-Italian version is already available, a fully colored, beautifully designed edition will be completed before Christmas. It already can Ordinarium as a PDF on the website of Signum Ambrosianum be viewed. Also one has been e-book version for tablet and smartphone provided. Ordinary Mass can free downloaded, printed and circulated. The only condition is that the source is acknowledgedwww.signumambrosianum.it - ISBN 978-88-907422-2-4 . 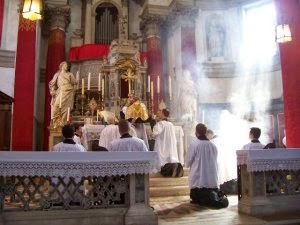 Canon Amodeo celebrated the 50th anniversary of his ordination to the priesthood in ancient Ambrosian rite
When Pope Benedict XVI. issued  the motu proprio, Summorum Pontificum in 2007, the Archbishop Carlo Maria Cardinal Martini (1979-2002) and the Milan clergy were little enthused. When the seminarians of the Archbishop's Seminary  requested   training in the "extraordinary" form,   Martinis successor Cardinal Dionigi Tettamanzi (2002-2011) represented the view that the Motu Proprio applies only to the Roman rite, but not for the Ambrosian rite. The Archdiocesan canon lawyer based his interpretation  that only the Roman rite is mentioned in the Motu Proprio. Accordingly, it applies to the scope of the Ambrosian rite stemming from the Motu Proprio  Ecclesia Dei of  1988.
Under the incumbent, since 2011, Archbishop Cardinal Angelo Scola established a change in the attitude of the Archdiocesan Curia. Cardinal Scola  as Patriarch of Venice  had transferred the care of the faithful who wanted the old rite to the FSSP, the rectorate of a church on the Grand Canal.  For the celebration of the traditional form of the Ambrosian rite two Milan canons, Canon Angelo Amodeo and Canon Attilio Cavalli strove mightily to celebrate it. After the death of Canon Amodeo  the traditional Ambrosian rite found a strong advocate in the new archdiocesan master of ceremonies,  Msgr. Claudio Fontana. The Society of St. Pius X began, after the death of Msgr. Amodeo with the celebration in the traditional Ambrosian rite, since they had celebrated in Milan only in the traditional Roman Rite.

Ambrosian Rite in Parts of Lombardy and of the Ticino

The Ambrosian rite is the official liturgical rite of the Archdiocese of Milan. The Superior is the Archbishop of Milan. The ritual goes back to the canonization of the Church Father Ambrose, who was from 374-397 Archbishop of Milan, but is much older in essential parts.
When Pope Gregory I at the end of the 6th century, expanded the Roman Rite in the Latin Church, the Ambrosian rite, next to the Mozarabic (Iberian-Visigothic) and other local rites, such as the Aquileiean Rite. While the rite of the patriarch of Aquileia and Venice was  replaced by the Council of Trent  with the Roman rite, the Ambrosian rite is there to this day. This fact is attributed to the fact that Pope Pius IV. was Milanese and was the soul of the Council of Trent, while  Saint Charles Borromeo was Archbishop of Milan 1560-1584 . 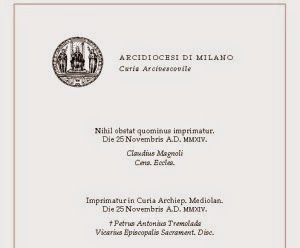 Imprimatur of the Archdiocese of Milan
Conversely, the Ambrosian rite was addressed by the post-conciliar liturgical reform, because Paul VI. was before his election as Pope, Archbishop of Milan. He took a personal interest that the liturgical reform was implemented in his former diocese. This worried his successor, Cardinal Giovanni Colombo, who performed the liturgical reform with "iron will" (Vita Pastorale 9/2008). Under Cardinal Tettamanzi "reform in the wake of the Second Vatican Council" (Vita Pastorale) in 2008 with the "New Ambrosian Lectionary" (NLA) was largely completed was introduced in 1976 ad experimentum.
The Ambrosian rite originally comprised much of northern Italy. Today it is still celebrated throughout the Archdiocese of Milan (except two small enclaves) as well as some adjacent areas of the dioceses of Bergamo, Lodi and Novara, and especially in the north of the Swiss diocese of Lugano.
The cultural association founded in 2012 Signum Ambrosianum is dedicated to the care of the traditional form of the Ambrosian rite. So far,  next to the Ordinarium Missae  there is already  published a Antiphonale Missarum and Laudamus Te  with the most important songs of the Ambrosian liturgy. The publication of the Ambrosian Psalters and publications on the Ambrosian chant are in preparation.
Signum Ambrosianum works closely with the existing since 2011 Cantori Ambrosiani and the Association Res Musica together, who are committed to the care of the Ambrosian chant in the liturgy.
Text: Giuseppe Nardi
image: Signum Ambrosianum
Trans: Tancred vekron99@hotmail.com
Link....
AMDG
Posted by Tancred at 10:39 PM

Is the Ambrosia and Mozarbaric masses radically different from the 1946 latin mass we attend?

Once heard an interview with a non-vatican 2 traditional priest.He stated there are a few rites in the Catholic Church that would be alien to the western tridentine rite if someone hadn't attend their masses.

e-book of Missae Ambrosianum - file not found.
Do you (someone) have a copy?