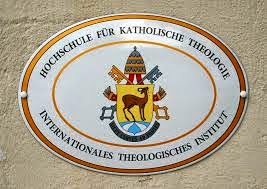 Guest Post by Gloria.tv
(Vienna) The International Theological Institute (ITI) in Trumau south of Vienna will be short by three leading professors and five administrative staff. This was confirmed by the President of ITI, Christiaan Alting of Geusau, at a meeting with students on Monday. The three professors are:
• the Fundamental Theologian and Thomist Father Rupert Mayer OP.
• the philosopher Markus Riedenauer, married, 3 children.
• Ukrainian Byzantine Studies, Father Yosyp Veresh, who can be expected to stay until summer.
Two visiting professors are invited to teach for less pay: the moral theologian William Newton (Married, 6 children), and the politician Gudrun Kugler (married, 4 children).

Persistent Criticism of the President of the ITI

The shock measure was not unexpected for the students. President Alting previously informed the  22-member faculty already last week about the layoffs. The messages leaked out quickly. Last Friday, Alting invited the students to an information meeting, which was scheduled for Monday afternoon.
But on Saturday, the students gathered to discuss the situation. They expressed their anger against the dismissals  and found that those who were laid off were those  who had fought against the establishment in spring 2014 of Alting's nomination as President of the Institute.
For months, a dispute raged at the Institute  over Alting's person. He was employed by the Grand Chancellor of the Institute, Cardinal Christoph Schönborn of Vienna, against the will of the college professors. In the dispute, the professors even called to the Pontifical Congregation for Education.  A leading critic of the controversial appointment of Alting was the talented young British professor Alan Fimister. He was told during last summer at the short term, that his lessons from the winter semester were no longer desirable. A replacement for him has not been found. The dismissed Father Veresh regarded Fimister as friend.

Alting described to the students that a "serious financial situation" of the Institute was a cause for the dismissals. The Institute produces an annual deficit from 300,000 to 400,000 euros. For two to three months, the donations have taken a dive.  Alting  underlined several times that the layoffs were necessary only because of "structural problems". He also stressed that the dismissals were decided by Cardinal Schönborn. Alting presented himself as the "enforcer" and kept repeating that the students should "pray, study and simply trust the Cardinal,"  "You must trust your leadership, trust the cardinal. We are happy to have him. You can trust him."And later, "You have no choice but to trust."

Alting refused a discussion about why the termination has just been meted out to the professors Mayer, Veresh and Riedenauer.  Insiders believe that there are substantive and personal reasons behind the decision. The relationship between Father Mayer and Cardinal Schönborn, both Dominicans, was considered difficult. Mayer was touted as the best professor at the ITI. One student asked at the meeting whether  it the desire to get rid of Father Rupert was under the pretext of financial reasons. Alting said about Mayer: "We all know that Father Rupert is a great teacher and that he is irreplaceable in this sense. But we must know and trust that we can replace him."  Circulating rumors were false, said Alting. He asserted that there was no "personal vendetta".
Students who attempted to raise funds in order to get the dismissed professors, Alting recommended, should  advocate for persecuted Christians. He also said that it is planned to replace those dismissed by new professors. Finally, Alting mentioned that besides the financial problems, the number of students is declining.
Picture: ITT (screenshot)
Trans: Tancred vekron99@hotmail.com
Link to Katholisches....
Link to Gloria.tv...

I was thinking of applying there next year....me thinks God is telling me no