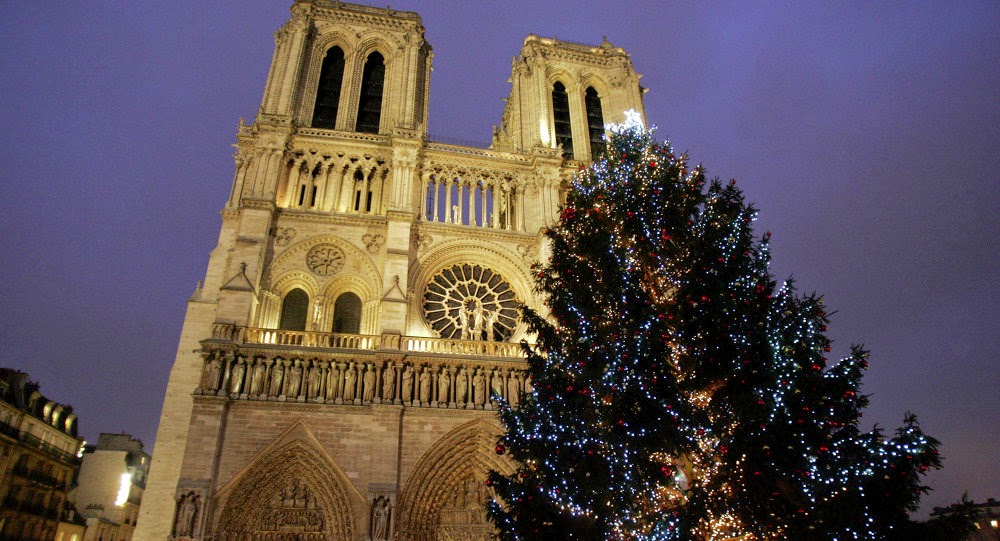 Edit: this bit from Gallia Watch and Tiberge, who asks, "aren't there enough Catholics in France with a little extra money to donate to such a worthy tradition? Was it necessary to take money from a foreign power, even if it was offered with the best of intentions? Of course the Socialist mayor could not violate the 1905 law on Church/State separation, and provide funds, even though funds are abundantly provided for some very anti-Christian cultural events and some very pro-Islamic festivities, such as the celebration of Ramadan at City Hall every year. Still, it seems implausible that private donations from the French Catholic community were not forthcoming."

It seems to us that actions speak louder than words but we await the season with great hope in the message of Emanuel  to be with us to the end of time, even as a child.


PARIS, November 21 (Sputnik) — Moscow has helped Paris raise funds for its main Christmas tree to be set up in the square in front of Notre Dame Cathedral, a source in the Russian embassy in France told RIA Novosti Friday.

In the past, a giant Christmas tree was bought using donations collected by the local parish only, but this year's campaign fell short of its goal – so Moscow City Hall jumped in to save the day, according to the Russian Embassy in Paris.

Russian ambassador to France Alexander Orlov has been invited to attend the switching on of Christmas tree lights on Saturday. The rector of Notre Dame de Paris, Monsignor Patrick Jacquin, will also be present to welcome the Christmas season and see the tree light up.

Paris's Christmas tree goes up in the main square in front of Notre Dame Cathedral every year, from December to January.

I think that you can declare that the West is finished. Sure, the core has been rotten for a few decades, but the skin was nice and shiny. Not anymore.

Perhaps lack of funds was to be the excuse for not putting up the tree ,looks like Russia called their bluff .

Thanks to Eponymous Flower for your interest in GalliaWatch. I will enter your URL to the English-language Sources on the right side of my blog.

The Freemasonic revolution of the late 60's was beyond successful.Will stupid blind selfish western men ever wake up and realize the dawn of Aquarius was a subversion to remove True Catholicism as the focal point of society?