Cardinal Kasper: Francis was an "Intelligent Conservative" -- Synod 2015 Will Bring a "Broad Consensus" 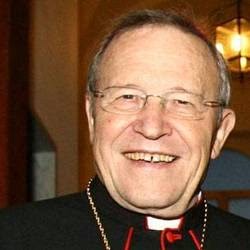 Walter Kasper: Francis Pope is an "intelligent conservative"
(Rome) The Cardinals Walter Kasper and Francesco Coccopalmerio are certain:  a "broad consensus" will be found In the Synod of Bishops in 2015 on the family.
The two Cardinals took part yesterday at an event titled: "With Pope Francis on the Synodal Way of the Family. A Test of the Reform Papacy." An event  for the "reformers"  themselves For the German Cardinal, Pope Francis  is an "intelligent conservative."  Invited were the Cenacle of  Friends of Francis (Cenacolo di Amici Francesco), who appeared for the first time in public. The meeting took place in the Catholic Russian Ecumenical Centre in Rome (Centro Russia Ecumenica).
The Ordinary Synod of Bishops on the Family, which will take place in October 2015 in connection with the Extraordinary Synod last October will bring a broad consensus "on all points". The German Cardinal Walter Kasper is convinced of  the voice of approval for the remarried divorcees to communion. Of the same view is also the Italian Cardinal Francesco Coccopalmerio, the President of the Pontifical Council for Legislative Texts . The admirers of the late Cardinal Carlo Maria Martini and the German theologian, know each other well. Coccopalmerio has been a member since 2007 of the Pontifical Council for Promoting Christian Unity .

Pope Francis is an "Intelligent Conservative" - ​​The Gospel is a "Process"

At the meeting, both cardinals also responded favorably to the synod, which was attended by both. Cardinal Coccopalmerio ex-officio, and Cardinal Kasper on personal appointment by Pope Francis.
"How can one describe Pope Francis?"  Cardinal Kasper asked in his speech. "I would say that an intelligent conservative is a good description for him. Paul VI. and John XXIII., were also conservatives, but intelligent, because they knew that the gospel isn't like a precious object behind a glass case of a museum, but must be passed on from generation to generation, it is a process."

Cardinal Kasper took the opportunity before the like-minded audience handing out a swipe against his opponents. Benedict XVI., the German theologian, had also already been "open" in any case "something more than his less intelligent followers".
Kasper was very pleased about the really "free" discussion at the Synod. "This in not to the detriment of the Church, which is not a totalitarian institution. I am sure that we will end up with a broad consensus." What this "broad consensus" said the cardinal, who is of the party in question, clearly between the lines.
In the circle of "friends of Francis" also Pope Francis' "big speech" he addressed to  the Marxist "popular movements", is  "open in the most unexpected of ways."
Text: Giuseppe Nardi
image: MiL
Trans: Tancred vekron99@hotmail.com
Link...
AMGD

Kasper simply cannot get over being owned by Cardinal Ratzinger in their "debate" on the local and universal church. The former reminds me of the Wicked Witch: "I'll get you my pretty."

Take heed, all those who label men like Paul VI or John Paul II as "conservative". Modernists are liberals, period. When flamboyant modernists like Benedict XVI get labeled as conservatives, especially diocesan traditionalists (e.g. FSSP), then the modernists conquer the institutional Church by default.