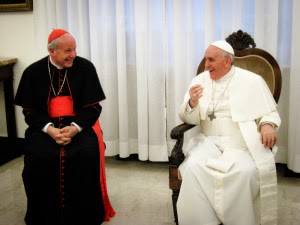 (Rome) Archbishop Christoph Cardinal Schönborn of Vienna agreed in the Italian daily Corriere della Sera to praise  homosexual relationships. As to the matter  of the Bishops' Synod on the Family the President of the Austrian Bishops' Conference gave an interview.
In a seemingly already quite unrealistic addendum, he relates, is his appreciation already under the context of the article.  If homosexuals interpret their relationship in sustainability, then, says the Vienna cardinal, homosexual relations are "exemplarily human". The Holy Scriptures, which the Cardinal concealed as far as possible,  speaks of a "abomination in the sight of God," on the other hand.

68er Slogans with 50 Years Delay in the Church

He himself, the Cardinal,  knows a Gay couple in Vienna (!) who live in a registered partnership. As one of the two gay men became ill, the other has "not left his side." Schönborn's exact words were: "It was wonderful, human and Christian, as the one  took care of the other."
This "exemplarily human behavior must be recognized" the cardinal took issue against those who make objections in principle to homosexuality and those who flatter them. A condemnation of homosexuals was not possible, said the Cardinal. And so, what Schönborn did not say, there is no condemnation of homosexuality. "Love is Love" was one of the dumb 68er sayings that seem to have arrived in the Church after an  almost 50 year delay.

Bishops and Priests Should Bow Before Aberrosexual "exemplary human behavior"

Schoenborn also provided a selective presentation of the Scriptures, in which the Cardinal pitted Jesus against himself and his teaching position. If bishops and priests are not able  to bless them, then they should at least bow before the "exemplary human behavior of homosexual," said the ÖBK-President. "These things must be acknowledged," he added, turning to a condemnation of homosexuals. Jesus told the people, even the tax collectors and prostitutes would enter heaven, a message that should not be forgotten especially by bishops and priests.

"All is love": In Addition to Homosex Polygamy, Pedophilia and incest?

The statements of Cardinal Schönborn was published in the Tuesday edition of the Corriere della Sera. In it, he accepts the thesis of an alleged "gradation" of relations, according to which there are no bad or sinful relationships any more, but only more or less perfect forms ("long form"). This applies to open marriages, premarital relationships, gay relationships, polygamous relationships. Only implicitly, it seems are pedophilic or incestuous relationships are not excluded, neither from the interim report of the Synod or by Cardinal Schönborn.
Text: Giuseppe Nardi
image: Archdiocese of Vienna
Trans: Tancred vekron99@nhotamil.co
Link to Katholisches...
AMGD

Schonborn is a devil in a red hat, pure and simple. Those of his ilk hate the Catholic Church and her doctrine and teachings and this synod has given them the outlet to show their true selves. They are vipers.

It's times like this that 1st Corinthians is a wonderful antidote to.

My goodness, the stench of lavender at the Vatican has become overpowering. Who am I to judge, but perhaps the cardinals and bishops might consider changing the colour of their cassocks.
Secularists and Protestants often depict the Catholic Church hierarchy as a bunch of senile old men in frocks. I'm beginning to see what they mean.

They do not speak of love; what these evil-promoters speak of is something entirely other, a wholly perverted and subverted idea of "love". And they show no love for souls, for what they are doing is leading them into sin and towards rejection of God and Heaven.

Unfortunately, for those who want to push Ratzinger, 'good', Francis, 'bad', Schonborn is one of Ratz's boys --

just like Bishop Bruno Forte, author of the gayspel synod document, was personally consecrated a bishop by Ratz while JPII was dying:

"the little-noticed story of how Bruno Forte, a priest of the Archdiocese of Naples, was suddenly made a bishop five months ago.

Forte, who last year was brought to the Vatican to preach a Lenten retreat to an already incapacitated Pope, is rumored to be Cardinal Ratzinger’s replacement as head of the Congregation for the Doctrine of the Faith. How this happened is anybody’s guess. The rumor has caused a great deal of consternation for one simple reason: Forte is a flaming neo-modernist. As noted in the Winter 2005 issue of The Latin Mass in a report by its Italian correspondent, Alessandro Zangrando, Forte was a pupil of none other than the infamous Cardinal Walter Kasper. (In yet another sign of things falling apart at the top, immediately after Kasper’s own elevation to the rank of cardinal he publicly declared to the press that the Old Covenant remains in force and is salvific for the Jews, and that Protestants are under no obligation to convert and become Catholics.)

Worse still, Zangrando, a respected journalist not given to reckless claims, relates that Forte’s 1994 essay Gesu di Nazaret, storia di Dio, Dio della storia (Jesus of Nazareth, history of God, God of history) reveals Forte as nothing less than “the standard-bearer of theories so radical as to the point of putting in doubt even the historicity of the resurrection of Christ. The empty tomb, he argues, is a legend tied into the Jewish-Christian ritual performed at the place of Jesus’ burial. It is a myth inherited by the Christians from Jesus’ early disciples. Therefore, the empty tomb, along with other details surrounding the resurrection, is nothing but a ‘proof’ made up by the community. In other words, Forte is trying to change the resurrection of Christ into a myth, into a kind of fairy tale that cannot be proven.”

Forte’s elevation to bishop was rather mysterious. Zangrando notes that Forte’s name did not appear in any list of possible candidates submitted to the Italian Nunciature, and even his ordinary, Cardinal Michele Giordano, Archbishop of Naples, “was reportedly against that appointment.” But, “in an apparent attempt at putting to rest a growing controversy” over Forte’s candidacy, he was personally consecrated a bishop by none other than Cardinal Joseph Ratzinger¾the very man Forte will succeed as head of the CDF, according to the rumors. Yes, “our only friend in the Vatican” has struck again.

Ratzinger (later Benedict) was one of the worst liberals in conservative clothing out there. His book Introduction to Christianity was banned by Cardinal Wyszyński for heresy. Shortly after becoming pope he gave audience to the infamous heretic Hans Kung, something not even John Paul II would do. The laundry list of ultra-modernists, homosexuals, and rapist protectors that he elevated to the episcopacy and cardinalate is frightening.

Truth is truth no matter how much it hurts. We can't project our own desires onto other people and make them into our own image, this is how secular politicians (e.g. Clinton, Reagan) got away with crimes. People wanted a conservative messiah that will fix the church, so they created a false mythology around Benedict to fulfill that fantasy, just like US conservatives do with "Tax Happy" Reagan or liberals do with "NAFTA" Clinton.

If Francis had a pre-Vatican II formation, he'd be Ratzinger.

I don't think it's fair to presume that He deliberately promoted pederast protectors.

Catholics should not reference a Prot source but rather a Catholic one http://www.drbo.org/chapter/53001.htm

I wonder why no one makes more of the O'Brien failure to show at the conclave. O'Brien was denounced by 'priests' - but like in the Paraguay incident consensual sex between adults is not a matter for investigation. McCarrick engages in sex w/priests -- and has also been sued by former seminarians. But he was not made to stay away from the conclave. There is something suspicious about the removal of both O'Brien and Ratzinger - and I believe it centers on the rich, papal knight pedophile Savile.

Indeed, I used to think it best to bring their age of retirement down from 75 to 65, now I think 50 more appropriate!

"McCarrick engages in sex w/priests -- and has also been sued by former seminarians."

God above, how on the earth do these vile men get promoted? Is it a case of "who knows what" and homosexualist blackmail. In light of the 2002 sex-abuse blow-up, I'm amazed that some of these men have been elevated even near to this date. Does the Vatican not know what these men are doing? If it does, it's so much more worse. (I can't bring myself to call these men priests.)

"There is something suspicious about the removal of both O'Brien and Ratzinger - and I believe it centers on the rich, papal knight pedophile Savile."

Can you elaborate? The most grotesque thing about the Savile case is the no-doubt collaboration of those in authority to enable him to reach such a diverse range of victims. Perhaps this is just a mirror-image of how grotesquely those in the Vatican/Church have moved in this sub-culture.

But Tancred, if he didn't deliberately promote them, why do it at all? Maybe they hid info from him? I don't know. Perhaps it's just too problematical to promote orthodox priests to the episcopacy if the bishops' conference doesn't want them. Remember that German or Austrian priest where the Bishop's Conference refused him.

Did Bl. Pius IX not give us one of the most evil modernist prelates of the 19th century and leave him in his post?

Even St. Pius X tolerated massive dissent among German theologians who basically spit in his face and refused to sign the Anti-Modernist Oath.

Maybe the Popes did that so the muck has a mouthpiece and is out in the open. Perhaps better to do it that way than have it underground. See with Card Kasper and your 'Kasper derailed' thread. Their own tongues condemn them.

"There's a poll, also, asking if Cardinal Kasper should be refused Holy Communion for his dissent on Catholic teaching. Right now, 83% of the respondents say he should."

A long time ago I read that God allows someone to be damned through their own perdition. It's quite terrifying.

I'm not sure why or how, but perfectly orthodox clergy were being persecuted in the 19th century as well. See conflict between Newman and Manning.

Bar homos from entering the priesthood, and you are spared worrying about whether the old men in cassocks are senile. Sec/Protty analysis and questioning can be OK, for instance, when human nature speaks, a point of logic is missed, fundamentals need explanation, etc.up to the point the questioning becomes shallow, superficial, contentious, or just plain juvenile. Why do you feel the need to go with the Protty/Jewish/Moslem/WhatHaveYou Zeitgeist?

And let me know when the last time you pointed out the the old Lesbians in judicial robes in the USA was. Link, please.

wonderful issues altogether, you simply received a new reader.
What could you suggest in regards to your post that you just made some days
in the past? Any positive?