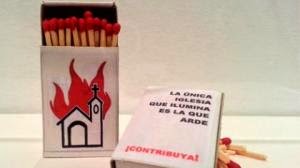 (Madrid) A network of European museums of contemporary art is a misanthropic, blasphemous and anti-clerical exhibition. The exhibition can currently be seen under the name  "Un saber real instruments útil"  the Queen Sofia Museum in Madrid. The exhibition promotes abortion, insults Christianity and is hostile to the Catholic Church. "It would be reprehensible if a religious denomination would get money from the government to insult feminists", said Infovaticana. Equally reprehensible is the inverse conclusion that feminists get money from the Spanish government and the European Union (EU) to insult the Catholic Church.
The "valuable" pieces, currently shown in the Museo Nacional Centro de Arte Reina Sofia  include matchboxes illustrated with a call for violence: "The only church that illuminates is  burning. Support help! "
The Queen Sofia Museum, named after the former Spanish Queen Sofia, the wife of  King Juan Carlos I, who abdicated on June 19th, is holding an exhibition, which is funded by taxpayers' money, blasphemes the God, insults the Catholic Church, degrades human dignity, calls for anti-Christian violence and the murder of unborn children. Miguel Vidal started a petition on HazteOir, which prompts the museum director , Manuel Borja-Villel to close the exhibition.
The Museum of Modern Art was founded in 1990. The headquarters is located in San Carlos Hospital in Madrid, which had been founded in the 16th century by King Philip II.

EU-Sponsored Church Hostility "in the Name of Art"

Was compiled by the exhibition  Croatian Curator Collective WHW What, How & Whom that holds exhibitions in the German-speaking world, especially in Austria. The Madrid exhibition was funded by the EU Culture Programme. The alleged "educational" approach of the exhibition recalls not coincidentally of the National Socialist "education programs". Nor that the Collective WHW put together an exhibition for a new European museum network called L'International (The International).
The  International Museums-  with its naming inspired by communistic nostalgia include the following six museums of modern art at: Moderna Galerija (MG + MSUM, Ljubljana, Slovenia); Museo nacional centro de arte Reina Sofía (MNCARS, Madrid, Spain); Barcelona Museum of Contemporary Art (MACBA, Catalonia, Spain); Museum of Modern Art, Antwerp (M HKA, Antwerp, Belgium); SALT (Istanbul and Ankara, Turkey) and Van Abbemuseum (VAM, Eindhoven, The Netherlands).
The exhibition is expected to be seen in all these museums soon. The Exhibition in Madrid is imbued with hostility toward Christians. An exhibition piece which criticized Islam,  would not only have been unsuitable for left and left-liberal Western states, but also for the Islamic Turkey.

Sacrilegious "Our Father" of Argentine Feminists

The exhibits feature a total of 30 artists and artist collectives. Among these there is also the Argentine feminist collective Mujeres publicas (Public Women). The "art" of Public Women is meant to attack the Catholic Church and to offend Christians and Christianity.
The Spanish left would not put up with having to pay taxes and can then offend people in an exhibition with their own money.The exhibition Un saber real instruments útil (Really useful knowledge) promotes the feminist "Our Father" the Mujeres publicas, which states:

"Give us the right to decide about our bodies. And grant us the grace to neither be virgins nor mothers. Free us from the authority of the Father, the Son and the Holy Spirit, so we are the ones who decide for us. Pray that justice does not follow the order of the Church and be free from  misogynist oppression. We come to the right to deny that the fruit of our body is blessed. Lead us not into temptation, not to fight for our rights. And grant us the miracle of legalization of abortion in Argentina. Amen ".
From "Mujeres publicas comes the feminist battle cry:
"The Pope is Argentinian and abortion is prohibited. If the Pope were a woman, abortion would be law. "
The petition against the blasphemous and anti-clerical exhibition with a request that the exhibition is addressed to the museum director and at the same time to the Spanish Government.
Text: Giuseppe Nardi
image: InfoVaticna
Trans: Tancred vekron99@hotmail.com
Link....
AMGD

Tancred, this is what I'm saying. We must kill these people. Grab your guns, destroy them all completely.

Probably supported by the Spanish bishops.

Pray for them. Be a white martyr by knowing your faith and being able to explain it. When Spain goes Mohammedan, some of the lefties will repent, and some will become Muzzies, their true criminal hateful selves. No new El Cids this time around, at least not until Christians are forced into dhimmitude.

I wish agent provocateurs would all disappear and go to heaven or something.

We can't, Tancred. Can you imagine a place in the public at large where it is allowed to complain about this and not be dismissed?

People try for civility and to be heard, but when it is for Christ, we are immediately dismissed. When civility has ended, of course the only way is through violence. It has been like that throughout history. And there is no guilt in protecting the Church from violence with violence; their own provocateurs have no objection, and even if you have no interest in war, war is certainly interested in you.

Christ said "Do not cast your pearls before swine"God has given them the free will to do what they will until he wills otherwise.

Unfortunately threats of physical violence are against terms of service.

And that'll get you in trouble. Sorry.

Can one imagine a matchbook emblazoned, "The only time a Planned Parenthood site makes the world a brighter place is when it is burning down"?
You'd be thrown into jail for "hate speech."
John 15:18-19

(Save the Liturgy, Save the World)