Bishop Synod Will End with the Beatification of Paul VI., the Pope of Humanae Vitae -- Partipation of Benedict XVI 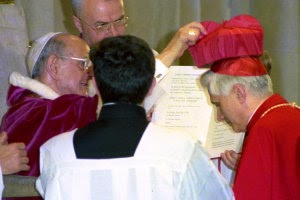 (Rome) The current Extraordinary Synod of Bishops gathered in the Vatican concludes on October 19 with the beatification of Paul VI., The Pope of the encyclical Humanae Vitae . No document of the papal Magisterium of recent times created more hostility and brought open resistance and disobedience within the Church  as much as this encyclical. It represents the Church's response to the sexual revolution and was therefore anti-cyclical in open contradiction of the prevailing zeitgeist.
The sexual revolution had aimed at the disinhibition of sexual impulses, the targets were apparently taboo sexual behaviors, perversions and identity disorders. The ideological currents behind it, which provided the theoretical framework and pushed forward the enforcement may be named exactly. They are located in the left-wing spectrum, whether left-libertarian or Marxist, supported by "sexologists" who themselves suffered from perverse sexual pathologies.

However, the core of the sexual revolution was the birth control pill, which sought to separate the sexual act between man and woman from conception and intruded in the relationship between the sexes, shook  marriage and the family. Its biggest promotion was experienced through the often racist ideologues of population control. Pope Paul VI. however, affirmed the openness of the sexual act for the transmission of life and thus the ban on contraceptives.
The encyclical is often referred to as "prophetic". Firstly, because it came in conflict with the spirit of the times. On the other hand, because it was written in opposition to the more common attitude in the Church that sought an arrangement with the prevailing zeitgeist and wanted to allow artificial contraception. A recommendation that was pronounced by both of the commissions appointed for its study by John XXIII and of  Paul VI..
The episcopate of the German-speaking world following the publication of the encyclical was in 1968, in open rebellion and refused obedience in the Königstein (Germany), Mariatroster (Austria) and Solothurn (Switzerland) Declarations. The above statements have not been lifted to this day. The reasoning behind it reminds me strangely of those of Cardinal Kasper to the weakening of the marriage sacrament: the gap between "practice in life" of the people and Church doctrine, which should be overcome by adapting the teaching to the practice. And the German episcopate is found again in the footsteps of disobedience as already in 1968's disobedience brings forth new disobedience?

Benedict XVI. participates in the beatification of the Pope, who created him a Cardinal

Meanwhile,  emeritus Pope Benedict XVI. has made it known that he will participate at the beatification of Paul VI. He participated at the end  of April in the canonization of his predecessor John Paul II., and John XXIII.
Paul VI. created Jospeh Ratzinger, then archbishop of Munich-Freising, Cardinal. The recognized miracles, with which the beatification process was completed successfully, relates to the healing of an unborn child early 90s in California.The doctors who discovered a serious health problem in the fetus, the young mother, recommended as the only remaining solution, to kill the child by abortion.
The mother refused and instead trusted in Divine Providence. As an advocate, they turned to Paul VI. because of his encyclical Humanae vitae for the protection of human life.

The child was born without problems and completely healthy. Meanwhile, the child without health complaints has come into adulthood. The postulator for the beatification process called the healing in "accordance with the Magisterium" of the Pope. A miracle in the "defense of life, family and marriage", which is dedicated to the encyclical. Cardinal Antonio Cañizares, who was just returned by Pope Francis as Archbishop of Valencia in Spain, former prefect of the Congregation for Divine Worship, told Info Vaticana that the Positio of Paul VI. was the most impressive was that he had read in his life.
Text: Giuseppe Nardi
image: InfoVaticana
Trans: Tancred vekron99@hotmail.com
Link to Katholisches...
AMDG
Posted by Tancred at 10:51 AM

For those of you who don't know,

In the 1950's Fr. Luigi Villa was informed by Padre Pio that he had been personally chosen by our Lord to “defend the Church of Christ from the work of Freemasonry, especially the ecclesiastical Freemasonry”. This mission was approved by Pius XII, who provided Fr. Villa with a Papal Mandate to carry out the work. Fr. Villa wrote a masterful book proving that Paul VI was not a saint.

Paul VI was accused of being a practicing homosexual by the Italian nobility and Milanese police. Homosexual communities invaded seminaries en masse because rumors were that Paul VI was homosexual. Even if he wasn't a homosexual and it was all just calumny, one undisputed fact remaining is that Paul VI overwhelming favored homosexuals for episcopal appointments.

More info on Paul VI and the homosexual take over of the institutional Catholic Church: http://www.rcf.org/docs/droleskeyriteofsodomy.htm

This is all probably true. The canonization of both John XXIII, John Paul II, and now the beatification of Paul VI did not follow proper, traditional protocol and procedure for the saint making process.
But Pope Francis' attitude about this....and so much else about the Church seems to be " who cares, we'll just discard tradition and the rules and make everything up as we go along."
Not really true saints.
And not really a true Pope (Francis that is)

At least John XXIII(especially), Paul VI, John Paul II and Benedict XVI dressed and acted like a Pope. Unlike this guy Francis.

John XXIII, who is so often credited by the liberals as hating the Papal pomp and ceremony was surprisingly the opposite! When planning his coronation in 1958, even the MC's had to restrain him because he wanted to bring back some papal vesture and pomp that Pius XII didn't even use! He had to be restrained in his enthusiasm. His reaction to the cautionary advice from the MC's was "Nonsense.....the more the better!", but in the end he gave way.

The miracle was that something that had a chance of happening naturally did happen. Other reports of the miracle make it clear that there was always a non trivial possibility of a normal birth.

When this pope receives his canonization, will I be obligated to believe that this seemingly natural event was miraculous?

Canonization is not objectively credible. The church talks a lot about responding to the needs of the world, but does the world really need incredible and objectively unwarranted (aside from the warrant magisterial renders) canonizations foisted upon it?

Fr. Villa's book was an eye opener and a mind blower. He did the Church a great service in its writing. Who are the wicked wicked souls who leave Leo XIII, Pius XII, and Abshp. Sheen to fester on the shelf, while they raise the Masonic gay-blade Paul VI to the altar?

Our house is left desolate. Francis, Shonborn, Marx and all their ilk are a scourge and a plague worse than ebola...and we deserve it.

"Our house is left desolate. Francis, Shonborn, Marx and all their ilk are a scourge and a plague worse than ebola...and we deserve it."

Very true!! This is the rotten fruit of Vatican II, and we deserve it. But I truly believe that after the quick, short but extremely divisive and destructive pontificate of Francis , his successor will be a pontiff who is totally the opposite....very much more in line with and similar to Benedict XVI, John Paul II, and even like a Pius X. He might not be especially young, but he will be younger than Francis was when elected (76), and will have more than a decade+ to erase the disaster of Pope Francis.
The dusty Vatican Papal apartments, unused by this weirdo Francis, will have to be cleaned and opened up to welcome the next new Pope who will take up residence there as all Popes before this Francis have done.
All the loudest supporters of Francis will disappear back into the shadows...liberation theology will be condemned again, Latin will enjoy a strong renaissance, and Papal Masses will be even more elaborate than the small restoration Benedict XVI attempted. Francis will be dead, but Benedict XVI may be there to see it....and it will be extremely gratifying for him in his last few months.

We're in the Great Apostasy my friend....wake up! This is La Salette writ large and in the flesh.

Whom, might I ask, is going to elect this great orthodox restorer to the throne 'shortly'?....the same clowns that elected the clown bergoglio? (and before I get any "show respect to the Holy Father!", Paleeeeze...the one who dons a big red clown nose, while shunning the red mozetta and all things papal IS a clown).

I like your vision, but it is just the opiate of pollyanna-ism. Read Our Lady's words, Bl, A. Catherine Emmerich, St. Francis's last prophecy....you're pushing against some mighty heavy hitters.

Three Pope "Saints" who, one after the other, oversaw the cover-up of the greatest sex abuse scandal in history.

Yet none of them has any personal responsibility for that crisis despite being the supreme pontiff? Covering up for the rape of children does not "blot your copy book" as far as a canonisation process goes?

I guess the buck does not stop at the top after all.

"No document of the papal Magisterium of recent times created more hostility and brought open resistance and disobedience within the Church as much as this encyclical. It represents the Church's response to the sexual revolution and was therefore anti-cyclical in open contradiction of the prevailing zeitgeist."

## So: is the world to be courted as a friend - or, to be defied when the Zeitgeist of the world is opposed to Christianity ?

The Apostles had very different ideas from the Synod Fathers:

"You adulterous people! Do you not know that friendship with the world is enmity with God? Therefore whoever wishes to be a friend of the world makes himself an enemy of God."

## It seems the men at the top of of the Church can't decide how to regard the world. Which, if true, is astounding - and not good news at all.

As for Paul VI - I can't see how he can possibly be regarded as a Pope who is fit to be canonised. Quite apart from the highly dubious not-so-miraculous miracle - Saints can be canonised without them, after all.