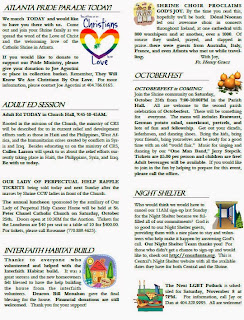 Here's some history of the parish of the Shrine, which is on the site of one of the first Catholic churches in the state of Georgia from the parish website, which boasts a "GLBT" ministry: 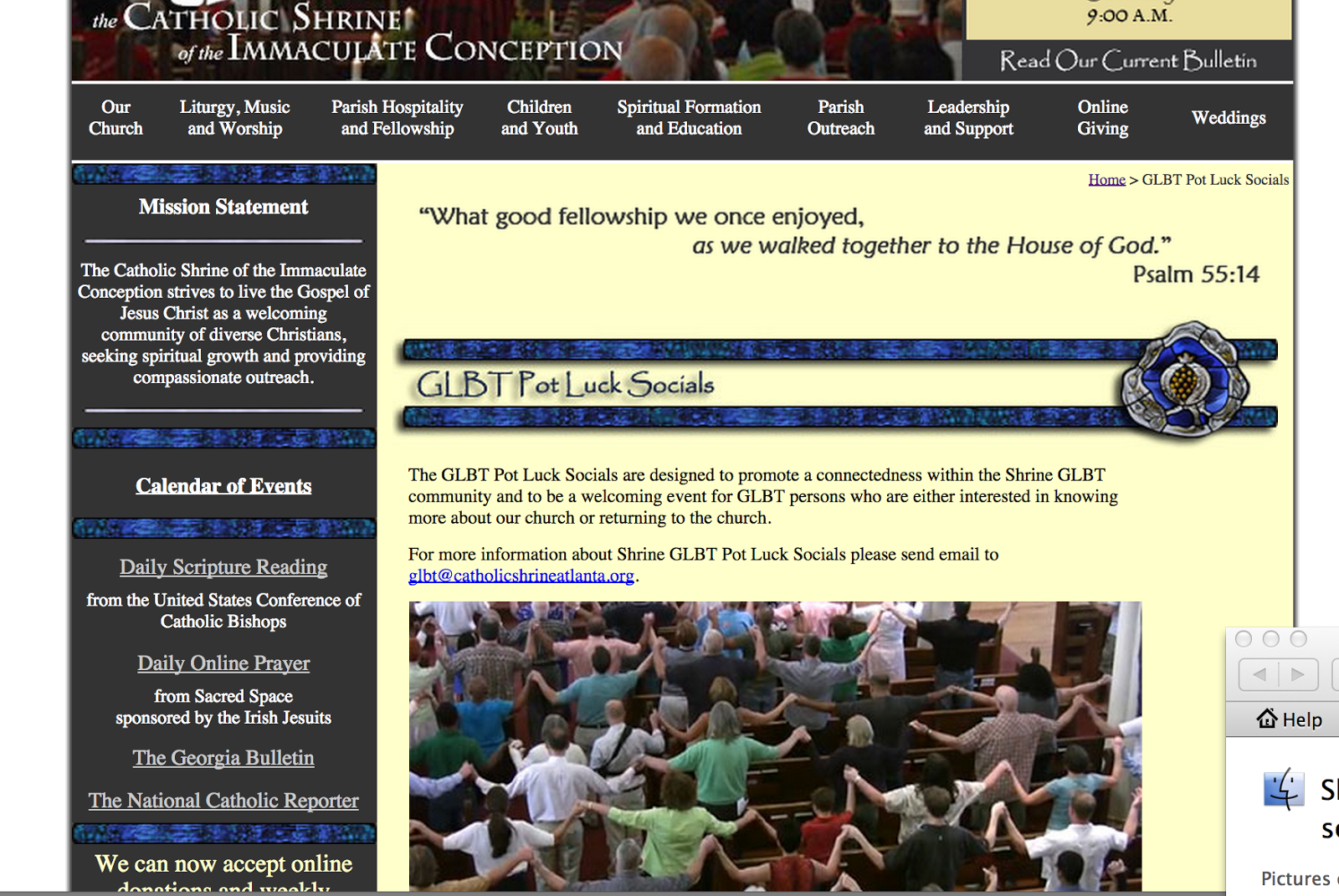 Oh, good. Pope Francis would be so proud.

1) Anyone surprised that a former USCCB president allowed this in his diocese? Who was going to stop him? Wuerl?
2) Does anyone know what the real cause of that dust-up over the (in my estimation, in this day and age, given the uses of the building, not unreasonable) cost was of the mansion that Abp. Gregory, protégé of Cdl Bernardin, built? (Bp Van Elst, Tebartz, we hardly knew ye here in the USA. Maybe Cdl Marx should defend you guys more.)

This is so sad but to paraphrase what C. Dolan said about 'welcoming gays' (leave them comfortable in their sin?): here in New Yark we are already doing this. Yes, encouraging sacrilegious communions, etc. And so, with the apparent blessing of the Bishop of Rome, diocese after diocese will capitulate to the lavender mafia.

How long, O Lord will You allow Your Bride, the Church to wallow in filth?

This is patently diabolical. The bishop responsible ought to be defrocked. And the Shrine needs to be reconsecrated after such sacrilege. Reparation!

Wow, I am in the Archdiocese of Atlanta, and I did not even hear about this. It was evidently kept extremely quiet.

I'm from Atlanta. This morning is the first I've heard of it - this is not exactly the sort of thing the Archdiocese is going to trumpet in the conservative suburban parishes. In a likely futile exercise, I fired off an email to the Archbishop after seeing it to voice my complaint. Still, I encourage other Atlantans to do the same. I'm sure contributing Catholics would like to know what funds from the Archbishop's Annual Appeal support such activities.

Indeed, this is diabolical. Beyond diabolical. These people no longer believe that sodomy is a sin that cries to heaven for vengeance.

He's only obeying the pope!

I'm in the Atlanta Archdiocese and did not know anything about this.
This is really disturbing and I will inform my fellow Catholics. Archbishop Gregory is originally from the Chicago area.....need I say more? Everyone needs to email/ contact him.

We had some pretty bad weather here in Atlanta the weekend of this demonic march and I always pray for bad weather when it happens. Hmm...strange that 5 tornadoes swept through Atlanta a few days after this event.

I never heard a thing about this either. I am shocked and disgusted. Well, time to contact the Archbishop and give him a piece of my mind over this.

If you leave in Atlanta, please attend the Gay Pride Parade. Look to see if NAMBLA is marching. If so, take pictures and send them to the local media and to SNAP saying that the Archbishop is promoting a parade that includes pedophiles.
Since they won't be shamed by their betrayal of Catholicism, let them be shamed in the public (non-Catholic) eye. That will stop all bishops from following this shameful example.

We don't need to create scandal so quickly. Archbishop Gregory is a great man, from what I perceive, a saint. "Let every man be quick to hear, slow to speak, slow to anger" (James 1:19).

We should focus on the good of the synod documents for now and each in our own way continue the pastoral work of the Church.

Need for scandal? Causing scandal is a grave sin. This scandal is caused to souls by the bishop and his accomplices.

You mean that it's been derailed for the time being?

Hey don't miss in the lower right corner of the bulletin the announcement of the "next LGBT potluck" on November 8th. All are welcome!

Wilton Gregory is a homosexual viper elevated by homosexual viper Bernardin. These fairies are proselytizing a "pride of LIONS" that will prey about seeking to devour innocent souls just like in Sodom. Has anyone noticed that these Gay pride "parades" are now called FESTIVALS (feast days) and have events throughout the year -- i.e. every month?

Maybe queer Wilton will really welcome queers in 2015 by renting them the Atlanta Cathedral for their queer kickoff party (like Francis did the Sistine Chapels since Wilton's gone with the wind plantation was quashed for the interim where he was going to host big cookouts):

I guess since they don't have children, these queers have a lot of DISPOSABLE income -- and MONEY is what WILTON, BERNARDIN, FRANCIS & all the Pharisees love! May God rebuke them and seal them in the fiery pit of hell!

I am real sad to read all this, we should love everybody, yes, but everybody in their place, Jesus forgive the sinners but told them DO NOT SIN NO MORE, no OK I love you but keep on sinning, but they will be hearing from GOD. Shame Arch. Gregory you are wrong once again, do not count with my money. to support your Agenda. Along time Practice Catholic Lady