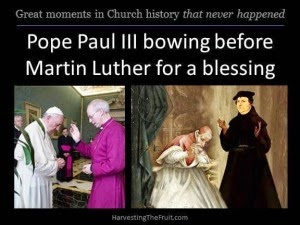 (Rome) From recent events, the Catholic Blog "Chiesa e Postconcilio" is concerned (and post-conciliar Church) with idiosyncratic renditions of Scripture and its interpretation by Pope Francis. Subsequently, the translation:

Things Never Heard or Seen from the Chair of Peter

From the guest house Sanctae Martæ in the Vatican, which can hardly be described as the seat of the Holy See, Pope Francis will sound off again after the summer break  not only with Manichaean and ambiguous judgments without adequate explanatory depth, with which Catholics are divided into two groups, but also daring personal interpretations of Scripture. The person responsible in the Vatican has resumed the proliferation of "morning meditations"  on the website of the Vatican, including highlighting false allegations.
The most recent example is attributed to Pope Francis Saint Paul: "I must indeed boast of my sins." Prince of the Apostles "boasts" of his sins? One is amazed and shakes his head in disbelief. Of course this can only be done, by one who at least has a certain capacity for church teaching and some familiarity with the Scriptures.

Incorrect Rendition of the Apostle Paul

St. Paul speaks in the 12th chapter of the Second Epistle to the Corinthians in no way of sin, but of his "weakness". In the NASB it says: "(...) On behalf of such a man I will boast; but on my own behalf I will not boast, except in regard to my weaknesses." (2 Corinthians 12.5). The Greek word used by the apostle, is ἀσθένεια (astheneia), which means simply "weakness" and not "sin".
In addition, Prince of the Apostles at this point explains very well what his "weakness" is: "He [the Lord] replied to me: My grace is sufficient for thee; for you, for power in weakness. Most gladly therefore will I glory in my infirmities, that the power of Christ may rest upon me. Therefore, I affirm my weaknesses, insults and hardships, persecutions, and fears which I stand for Christ; For when I am weak, then I am strong." (2 Corinthians 12.9 to 10). The weakness the apostle speaks of, are the physical and mental suffering, which he enumerates, but not the sin.
At this point the eschatological paradigm shift resulting from the  quote incorrectly reproduced by Pope Francis need not be gone into. Just this: "O happy fault", the felix culpa of the Exultet is not what's meant.

The "liberal" interpretation of the Gospel by the Pope has something grotesque in it and you want a little bashful concern about the wide veil of silence. Were it only not for the media dissemination, making giving the Pope's words their significance. And were it not for the absence or better, the silence of those who fulfill their responsibilities and should have the courage to rectify what should be corrected. Instead, the improvised words of the Argentine Pope in the Vatican,  are disseminated without censorship  and stylized by compliant  Vaticanists into "pearls".
The above example is not an isolated incident, but one of a lengthening series of offensive Bible "interpretations". But where are the priests, the bishops, the cardinals who will raise their voices against it and at least prevent the proliferation half-baked blurbs ? Instead, is there not even the murmur of a contradiction? Is there so little faith, even of church leaders, in the power of words, that they consider false ideas as well as false gestures empty of consequences?

Just as no one in the Vatican raised an objection when "the pope wanted emphatically" an Interreligious football match for peace, although the program was known in advance and announced that before the kickoff, the daringly clothed Argentine singer Martina Stoessel with a dubious Death Rune on her stomach (commonly known as "peace sign"), sang the song Imagine  published in 1971  by John Lennon:

Cohorts of "Normalists"  have certainly prepared detailed explanations for it at hand. Perhaps: "It was just a football game ..." The song Imagine follows from minute 4:40 in the video. Friends and I have followed  Riscossa Christiana's call and instead of watching the football game,  prayed for  persecuted brothers and sisters in the Middle East.

Edit: we also noticed someone waving the rainbow flag in the audience.  Coincidence?

Has these been hear about? AND THIS IS REALITY ALSO REALITY OF TODAY'S CHURCH: https://www.youtube.com/watch?v=0P7HXozdBns

All these actions are the catholic pontiffs personal decisions concerning how he individually practices his religion.

They have no real significance for Catholics who are entirely free to disagree with his ecumenical efforts .

Anonymous said...
This comment has been removed by a blog administrator.
September 9, 2014 at 2:34 AM

September 9, 2014
Muller-Fellay Meeting: Cardinal Muller will not accept Vatican Council II without the irrational premise and he wants the SSPX, FFI to use the false premise with the Council and Catechism ?
http://eucharistandmission.blogspot.it/2014/09/muller-fellay-meeting-would-cardinal.html

Oh, give over, "Anonymous".