Post-Conciliar Disorientation and Clarity of Tradition 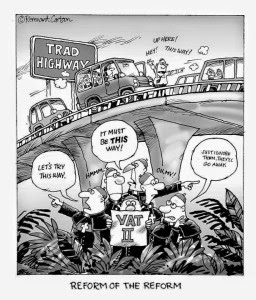 (Rome) The Second Vatican Council was to be the start of a new flower, to a new "spring" of the Church of charismata and strong religious faith of the people. The Council, at least in the conviction of not a few  prelates, clergy and laity of the 60s, was to  make "all things" new, especially the relationship between society and the Church. Through the Council,  Christianity would reach   all people, all ideologies, even embracing all other religions and in a new world that was Christian through and through.
And yet some, still undaunted, agree to  praises of the Council. An attitude which imposes two explanations.  Some, because they welcome the negative effects  in the post-Conciliar period internally. The others, because they force themselves in a denial of reality and try to keep these effects to which they object inside, to desperately to ignore them, because criticism of the council was made successfully into a taboo.
So where does the beginning of the 21st century, lead to the weakness of the Church in the West? According to a caricature of the traditional American website The Remnant, it's from their post-conciliar disorientation. In other words, from the mistaken belief that the Church must in its interior, be a replica of the plurality of the world, instead of being a clear voice in a pluralistic world.

Necessity for Salvation in the Church

Today, many doubt the necessity for salvation in the Church. Can it be that there is no salvation outside the Church? The only question is more rhetorical, comparable to the question of Pontius Pilate: "What is truth?" The question is dressed in the form of a statement by relativists. Similarly relativistic is the cultural climate today. Each "truth" is allowed, except for the absolute truth, the Incarnate Truth. It may not exist. It is not permitted as the exclusive, because it would put all other "truths" in question. The prevailing climate is also subjective, because everyone can lay out the "truth" that he wants.
The Church teaches something entirely different. The necessity for salvation for every human being remains unchanged and independent of these current fashionable trends of thought. Extra Ecclesiam Nulla Salus is the pregnant statement   of  the fathers. No arrogance, but irrefutably part of the truth of faith, which was repeated by the Fathers and the Magisterium throughout the Church's history. Here is a brief compilation, based on an article published a few years ago, which is based on a  contribution in the weekly magazine Il Padre Pio di Settimanale. It is the magazine published by the Franciscan Sisters of the Immaculate Conception, who more recently - like their provisional managed brothers - have been placed under traditionally hostile Visitatorixes.

Origen (185-254): "(...) let no one deceive himself: outside this house, outside the church no one is saved" (Homil.3, in Iosue 5).
Cyprian of Carthage (200-258): "Outside the Ark is the deluge and death; outside the Church condemnation " (De Unitate Ecclesiae, VI).
Lactantius (250-320): "Only the Catholic Church has the true cult. In it is the source of truth, the seat of faith, the temple of God; whoever does not enter into it or goes out of it, has no hope of life or salvation." (Institutiones Divinae 4.30, II).
Jerome (347-420): "I know that the Church was built on this rock [the Chair of Peter]. Anyone who eats the Lamb outside this house is profane. If someone is not in the Ark of Noah, he will perish in the deluge " (Epistola ad Damasum, 2).
Augustine (354-430): "Man can not attain salvation except in the Catholic Church. Outside the Church he can have everything, but not salvation. He can have honor, have Sacraments, he can sing Hallelujah reply amen, he may have the Gospel, preach the faith and the name of the Father, the Son and the Holy Spirit, but nowhere if not in the Catholic Church will he will be able to find salvation" (Sermo ad Ecclesiam Caesarienses plebem, 6).
And again Augustine: "Anyone who is separated from the Catholic Church, is destined for the divine wrath" (Epistola CXLI).

"And he said unto them, Go ye into all the world and preach the gospel to every creature! He who believes and is baptized will be saved, but whoever does not believe will be condemned "(Mark 16.15 to 16).
"He who hears you, hears me; and he that despiseth you despiseth me; but he who despises me, the "(Luke 10:16) despises him that sent me.
"And I say unto thee, That thou art Peter, and upon this rock I will build my church, and the gates of Hades will not prevail against it" (Matthew 16:18).
"If they do not receive you, and does not listen to your words, so going away from that house or city, shake off the dust from your Fü0en" (Matthew 10:14).
"He will not hear on these, tell the community; he listens to the community does not, then he be unto thee as the heathen and like the publican "(Matthew 18:17).
"But even if we or an angel from heaven preached unto you any other gospel than we have preached to you, let him be accursed" (Galatians 1.8).
If the Church for the salvation would not be necessary, why would Jesus send the disciples with the mission to proclaim the Gospel to the uttermost parts of the Earth? The order would also be "superficial" and "pointless" as ultimately the cross that Christ has taken upon himself, if it's not connected to the salvation of the people. If one wants the sacrifice of Christ, in order not annul his suffering and death, the necessity for salvation of the Church must be recognized. Because outside of it there is no salvation.
Text: Il Padre Pio di Settimanale / Martha Weinzl
image: The Remnant

Good summary. People do not realize that EENS was what held everything together. Without it, we are left with a jumble where nothing makes sense.

Vatican II was not a dogmatic council, but a pastoral one. It did not set out to define the faith anew, but taught how the eternal unchanging faith must be understood afresh and presented anew in the context of today's world freed from the distortions which inevitably crept in during the 2,000 years of the Church's life - a return to the pristine authentic way of Christ rather than preserving the false traditions of imperialist Catholicism. Needless to say this is a most difficult undertaking, especially seeing that in a highly authoritarian structure like the Catholic Church the forces of reaction are always very strong. But as Christ says, once you set yourself to the plough there is no going back. What a pity that so many in the Church are too narrow and small-minded to embrace the inspiring vision of Vatican II.

True this is what could have been published by the magazine Il Settimanale di Padre Pio which I would read regularly every week. There was a good article on this subject by Corrado Gnerre.

However the Franciscans of the Immaculate had translated a book in Italian of Fr.William Most, whose apologetics otherwise is good and commendable. I had protested many times and speciaùfically addressed the specifix error in that book. They finally stopped distributing it.

Fr.William Most like the Franciscans of the Immaculate accepts the Letter of the Holy Office 1949 .The Letter considers the baptism of desire etc as being exceptions to all needing the baptism of water for salvation in the present times. It considers the baptism of desire a replacement for the baptism of water.Here is the error. It is implying that a hypothetical, theoretical case is an explicit ,defacto exception to all needing to be formal members of the Catholic Church.
It is implying that the dead now saved in Heaven are living on earth and we can allegedly see them for them to be exceptions or subsititutes.
This error has permeated other magisterial documents and the Franciscans of the Immaculate accepted this.They would not affirm 'the Feeneyite' version of extra ecclesiam nulla salus since they were afraid of the authorities at the Vicariate and the Vatican.The priests were told not to say anything controversial.

Savonarola:
Vatican II was not a dogmatic council, but a pastoral one. It did not set out to define the faith anew, but taught how the eternal unchanging faith must be understood afresh

Lionel:
Yes but with the irrational premise used in its interpretation it contradicts the dogmas of the Church.

Which irrational premise do you mean? Which dogmas are contradicted?