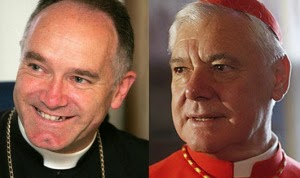 (Vatican) Pope Francis has received Curia Archbishop Guido Pozzo, secretary of the Pontifical Commission Ecclesia Dei in audience on 18 September.
There is nothing at present of the content of the meeting between the Pope and the Titular Archbishop of Bagnoregio on Lake Bolsena, north of Rome. The audience took place a few days before the meeting announced for September 21  between Cardinal Gerhard Müller, Prefect of the Congregation, and Bishop Bernard Fellay, Superior General of the Priestly Society of St. Pius X. Both the Holy See and the SSPX confirmed the upcoming meeting,  but didn't give an exact date. Officially there was talk of a date in "near future".
The Commission Ecclesia Dei is part of the CDF. Its President is Cardinal Müller. He is one of the nine outstanding Cardinals, including some heads of departments of the Roman Curia, who came in these days with two international publications in defense of Catholic teaching on marriage against the theses of Cardinal Walter Kasper to the public.
Cardinal Kasper responded, insulted and is hiding behind Pope Francis. Everything he did, "is agreed to by the Pope."
Bishop Fellay had said last April to Kasper's theses: "We can not to wait until the Synod meets in the autumn in its  devastated spirit, which Cardinal Kasper wants to give it, without raising our voices. (...) A Pastoral, which suggests the express teaching of Christ about the indissolubility of marriage is not merciful, but insults God  Who imparts His grace sufficiently to everyone; moreover they are cruel towards   souls, who are in difficult situations and receive that Grace which they need to live a Christian life and to grow in virtue, even to heroism "
Text: Giuseppe Nardi
image: SSPX / Wikicommons
Trans: Tancred vekron99@hotmail.com
Link ...
AMDG

But warm inside
Yellow candles spark
In the brilliance
Of the Monstrance bold.

A distinctive nature
Knelt in prayer
A Bishop cast
In Our Lord’s own mold.

But this is a man
A true Catholic Shepherd
An Alter Christus
To behold.

And he will not hunt you
Like a devouring leopard -
But lure
With his Fisherman’s Gold!