It's Very Possible Cardinal Burke Will Be Sent Into Exile 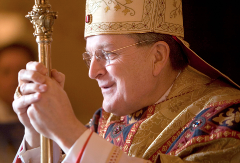 Edit: grave news continues, sorry.  Things are starting to take a very medieval cast indeed, what with saintly figures exiled, suspended a divinis, silenced and even murdered for their witness.

VATICAN CITY, September 17, 2014 – The “revolution” of Pope Francis in ecclesiastical governance is not losing its driving thrust. And so, as happens in every self-respecting revolution, the heads continue to roll for churchmen seen as deserving this metaphorical guillotine.

In his first months as bishop of Rome, pope Bergoglio immediately provided for the transfer to lower-ranking positions of three prominent curial figures: Cardinal Mauro Piacenza, Archbishop Guido Pozzo, and Bishop Giuseppe Sciacca, considered for their theological and liturgical sensibilities among the most “Ratzingerian” of the Roman curia.

Another whose fate appears to be sealed is the Spanish archbishop of Opus Dei Celso Morga Iruzubieta, secretary of the congregation for the clergy, destined to leave Rome for an Iberian diocese not of the first rank.

God clearly considers these characters to be obstacles in the way of the New Evangelization.

Some see a duck, others see a rabbit, but there's that nagging insistence that most of the Church's modern bishops would have almost nothing in common with most of the world's bishops a century ago, oh, and that our current crop serves a devious master.

Good for him, just in time too, a nice sleepy diocese somewhere where he can ride out the hellstorm about to hit Europe and especially Italy and Rome for their desire to "throw off the yoke of Holy Mother Church." If a future pope has to shake the dust off his shoes and flee over the bodies of his brethren, Card. Burke is lucky then to be out of there.

Clearly, I hate this Pope, and all his social justice friends. It is best if ISIS has their way with the entire damn Curia once it's been "purged" of the "mean" and "uncharitable" traditionalists.

Then, we shall see how charitable these negligent fools will be.

...Come on Anonymous ...let't not get carried away , I agree though this think about Cardinal Burke and the other"conservatives" being pushed out makes me feel ill...

The heart falling to the feet ill...we're never gonna get out of this mess without a direct intervention from God,

The men running the Church from the highest level are modernists and very creepy...I'm not going with them though...I cannot stand their modern invention of the Church.and I have distanced myself even more from it since Francis. In a strange way more convinced and determnined of my adherence to 2000 years of Catholic Tradition. They don't have anything solid in the modern institutional Church..it's MAD and causes confusion!

But I too have to keep the resentment and temptation to hate out of my heart by praying for these traitorous men!

Brillant move a masterstroke none better at the great game of Chess than Pope Benedict clearly one can see his invisible hand.

A picture is worth a million words
http://www.intrepidreport.com/archives/13516

Consider that the recent director of the Vatican Bank who was sent
packing due to corruption was a Knight of Malta. Consider that on the 1000th Anniversary of the Order the top brass of Malta powerful men and women met with Pope Benedict behind closed doors alone abandoned by his Cardinals, the date was Feb. 10th. Consider what the visionary Pedro Regis of Brazil stated "That the Knights of Malta will betray the Church." Consider that the Cardinal is to clean up a mess that the previous 80 year old could not. Payback

Malta will rejoice. Let the sheep gather under their shepherd and leave,the goats to the hirelings.

...aaaaaaand FGA, if you're still out there, I think we are getting some real clarity to your question of a couple posts back.

It's things like these that make me understand why Russia hates the Catholic Church so much. But it's not like they don't have their own problems. It's just easier to direct malice when there are names and faces involved, and not just anonymous "Hierarchy"; we know it's Maradiaga. We know it's Mahony. We know it's Dolan. We know it's Wuerl. And if it's a such that we're wrong in the end because we're not with Pope Francis and the vat2 gang, then why bother being Catholic? Aren't we just Protestants? Orthodox?

Who has the power to resist these people? If they were going to do something, they would have done it already. Maybe that's the reason Pope Benedict retired. He can't stand the fact that he can't do anything, he's frustrated at being contradicted at every turn; despite being the successor to Peter, he was pretty much surrounded by wolves who have their designs for the flock.

This is like spiritual rape by our so-called shepherds.

As soon as they sober up, they learn to hate their landlords and anyone else in close proximity.

I am not going to pretend any longer that I like this Pope, one bit.

I became Catholic in 2011 and remember reading the prophesies of Anna Catherine Emmerich. I remember thinking, hmm, there seems to be a lot in common, but I'm sure that's a long way off.

Fast forward to September 2014, I re-read them, and it's frightening how much her prophesies have in common with the current Church

It's not so much the truth that makes people hateful, it's the fact that they're being lied to or left out in the dark.

True Bishops and Priests will be driven from the Church ,mocked and persecuted ,they are the ones true to their Master ,who follow in his footsteps ,it says a lot when a Bishop or priest can be forced out for been faithful to the teachings of the Church ,while others were allowed to abuse children and cover it up at will for decades .

I hate this Pope....and I know many who likewise hate him.

Instead of Cardinal Muller bowing to Pope Francis not to promote the new Ignatius Press book celebrating the traditional Catholic belief of marriage and other family traditions...he should politely tell this Pope Francis where he can go! Rather than bow to him because he happens to be Pope (a guy like that.,...big deal!!), faithful Catholics should stand up to Francis and shout him down.
Maybe then he'll keep his radical opinions to himself, and keeo that gapping hole in the middle of his face shut tight!

I hope you were using the word hate off the cuff and don't really hate the man. If you do truly hate you need to confess that. There is a prophecy of a Franciscian monk named Bl. Tomasuccio de Foligno who speaks of a "usurper" who is "blocking the doorway of salvation". That's important to remember about this guy. If you listen to what he says, such as any his dozens of heretical quotes or watch what he does (marrying couples living in sin) he could give you or his intended audience the sad novus ordo crowd, the impression that it's okay and not sinful at all. But jthey've just been blocked from salvation (potentially) just like the prophecy says. Also if you develop a hatred for this man (easily possible I know) you've then allowed him to block you (potentially) from salvation by having a hatred in your heart. Again I advise what Fr. Hesse, and Saint Bellarmine and several other saints said, you simply ignore him. It doesn't mean you become some nutter sedavacantist (though they're looking more right these days), you simply ignore the continual asinine, non-Catholic statements, keep your Baltimore Cathecism, your rosary and TLM and ride out the storm until God resolves the situation.

I wish we actually could 'ride out the storm' with our rosaries, Baltimore Cathecisms and our TLMs. Part of the problem, me thinks, is that the TLMs are scheduled for a beheading as well. They have already started with it.

It's all of a piece. We must pray and sacrifice that cardinals, bishops and priests will do their solemn duty to save souls and so speak out against the constant attacks on the Deposit of Faith and the Divine (and Natural) Law, by the Holy See. Lord, have mercy!

Our Lady said, the scapular, rosary, and devotion to Immaculate Heart and Sacred Heart are what's needed for this time to ride out the storm. I trust her. And yes I think Jorge will move to stamp out the mass everywhere but at that point there will be independents and they'll have full rights under canon law due to the situation being an emergency

Pray and fast, do not hate.

My, how can you let this seeming disaster reduce you to hatred?

What a waste of time, to read and write on blogs when the whole world is desperate for faithful Catholics to pray.

Start now; these are serious times and we have the tools to save the world. Pray and fast, from now on. God bless you.