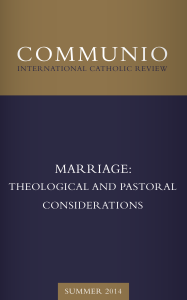 (Washington)  A few weeks before the start of the extraordinary Bishops' Synod on Family, a special edition of the International Catholic Review Communio will appear, which will address the theme of the Bishops' Synod, "Pastoral Initiatives in the Context of Evangelization."  It is the German International Katholischen Zeitschrift Communio (IKaZ) in its  English edition appearing in Washington.

Under the title Marriage:  Theological and Pastoral Considerations the special edition (Edition 41.2 -- Summer 2014) contains a series of essays, among them one by Archbishop Angelo Cardinal Scola of Milan, the Prefect of the Congregation of Bishops Marc Cardinal Oeullet and other Catholic personalities, who are connected to the Pontifical Institute of John Paul II. for the Study of Marriage and Family.
Special Edition Against Kasper's Attempt to Confuse Truth and Mercy
The themes discussed preliminary to the Bishops' Synod like pastoral care for divorced persons, Communion for divorced and remarried, same-sex relationships run the danger, obscuring the beauty of married life and the connection of the sacrament of the Eucharist. The mercy toward remarried and divorced is not purely a psychological consideration, but must be lived with the help of the secret of the cross.   The opposition between the Christian and the current individualistic thinking has led to a distorted view of marriage, as if "homo-marriage" is no stranger than a marriage between a man and woman.   Because of these assertions and with a view to the upcoming Bishops' Synod is the reason for the conception of a special edition.
Essays by Cardinals Ouellet and Scola


Among other things, the extensive special issue contains a text by Pope John Paul II. written in 1982 on Marriage and the Eucharist and the direct relationship between two sacraments.  The essays of  two Cardinals Ouellet and Scola move along this line, by holding up and showing the Christian anthropology, such as the nature of the two sexes and the bond between man and woman, will become apparent from the gospel as well as the connection between the sacraments of Marriage and the Eucharist. Cardinal Ouellet addresses thereby, the direct  impossibility of allowing remarried divorcees to Communion. The emphasis is not placed on  "punishment", but in the affirmation and better visualization of the  bond to Jesus Christ.

The question of the admission of  remarried divorcees to Communion has dominated almost the entire discussion in advance of the Synod of Bishops, as it is the only, or the main theme of the meeting. In addition, there may be  homosexual pastoral care and the education of "their" children. The concern of the special issue by Communio is to counter and shift the weights of the time influenced discussion on  today's level to the timeless, always valid, level.


The Constructed Contrast of Formalism Versus Compassion


The public debate will often try to reduce the question to a false contrast of "mercy" against "laws". Remarried divorcees and homosexuals are shown in this view as  "victims" of Church "formalism", where the "mercy" of God will be "denied".
The personal responsibility for failing to agree with the Church's teaching is a largely hidden behavior.

Thus, the Oxford graduate and cultural philosopher Nicholas J. Healy Jr. is concerned with the  provocation of Cardinal Walter Kasper, to permit remarried divorcees to Communion, and shows the limits of this proposal: the indissolubility of marriage, which  Kasper (exclusively)  bases  as  a personal decision of the individual, but not - especially - as the work of others; the (exclusive) idea in Kaspers thinking, is that mercy and forgiveness  are placed outside the indissoluble relationship.

Similarly, Father Fabrizio Meroni (Theological anthropology),  argues when he emphasizes that the basis of pastoral care for couples, divorced, remarried divorcees must always be a unit of "truth and mercy". Frequently, says the author,  mercy is  also often conveniently reduced to mere psychological benevolence excluding  the Passion of Christ. The first and most important gesture of mercy towards the divorced, is the relationship between sacramental marriage and the pain of their breakup, which is an intensive participation in the mystery of Christ's suffering. Since the sacrament of the Eucharist is a pure gift, it can never be the subject to "demands" and "claims" which also applies to the desire of remarried divorcees to admission to communion.

The author emphasizes the one-sidedness of the emphasis on the "suffering" of remarried divorcees, while the suffering of others, especially the children, but also the ecclesial community tend to be excluded.Some theologians today give the impression that the Fathers of the early Christian tradition were "generous" in dealing with the remarried divorced and had allowed a second marriage. It's a view which is also represented by Cardinal Kasper. In the Special Edition a text by Jesuit Henri Crouzel is reprinted from1977, which  refuted this claim.

Current Crisis in Marriage is the Result of an Anthropological Crisis

Other papers besides, deal in the theological, but also with philosophical and sociological aspects of the question. David C. Schindler (Philosophical Anthropology) indicates that the current crisis of the institution of marriage is the result of an anthropological crisis, in which the freedom of the human will is defined as a lack of commitment. For the Christian tradition, bonds are not only an essential part of being human and a gift, but form the pinnacle of freedom.

The moral theologian and family lawyer  David S. Crawford reveals that in the mentality of today, the marriage between husband and wife will be seen like "gay marriage", that is, that all of the individual is seen as a result of a functional private decision for the purpose of individual stakeholder in satisfaction. One that goes beyond the person's own welfare, the common good or fertility as an objective beyond the individual value would be eliminated from consideration.


And the German edition of Communio?

Whether or not the special issue will also appear in German translation in the German edition of Communio, may be doubted. The "mixed" editorship and editorial staff, which also includes the Cardinals Walter Kasper and Karl Lehmann, raise the issue of a mutual "neutralization".  Cardinal Kasper is the spokesman of the position against which the special issue of the English Communiono - is directed.