Cardinal Ravasi's "Cunning", Allows For No Revelation About the Synod 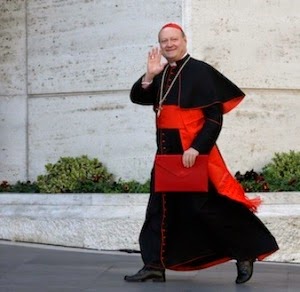 (Vatican) Cardinal Gianfranco Ravasi has introduced the event "Court of Gentiles", which begins in Bologna on 26 September. On this occasion, the President of the Pontifical Council of Culture asked what he makes of the question of the admission of remarried divorcees. Cardinal Ravasi does not come from the Diplomatic Corps of the Vatican, but he is known for his "diplomatic" skills that  it appears in this particular case it is not possible yet to say anything in its infancy. But what exactly?
The "Court of the Gentiles" has been developed by Cardinal Ravasi initiative, the implementation was begun under Pope Benedict XVI. It's about dialogue days in various cities around the world that promote the encounter between Catholics and atheists and to introduce the latter to the Church.
Pope Benedict XVI. however admonished it two months before his resignation, saying that the initiative could not be self-perpetuating in its own right.  Benedict XVI. could have described  the "Court of Justice"  with more genteel words, had it stopped at several cities, where the initiative offered the same old participants anointing themselves pretty fruitlessly on stage with incense. There can be no staged encounter without any real effort to openness to the faith of the Church, otherwise the initiative was fruitless, as the then head of the Church (see separate report Benedict XVI Brings the "Court of Gentiles" Back on Track. no Dialogue as an End in Itself, but Evangelization ).

On the question of divorced and remarried, Cardinal Ravasi said that it was better not to give an explanation, because he had received a standing position on the task. Ravasi is automatically the President of a Roman Synod Congregation. Pope Francis has also entrusted him with the management of the "Commission for the Message," the Synod of Bishops on the Family.  Ravasis deputy in this function is Pope Francis' protegé, the Titular Archbishop Víctor Manuel Fernández, rector of the Pontifical University of Buenos Aires.
At the same time, the cardinal said that a "certain problem" had already been recognized with regard to the indissolubility of marriage in the early Church on the theological level, but was met with "practical difficulties". "Now is not the time to make a statement, especially because the synodal event has not started yet and I am the chairman of the Commission for the Message, a tricky thing, because it might be the only official document of the upcoming Synod.  If we present the message, I will try to explain how we worked," said the Cardinal.

The Remarried Divorcees and the Porneia Question

"I would only add that one can already see in the Gospel of Matthew, yet exegetes, however, do not agree on the exact content  that it was a problem in the early Church, though they have the absolute certainty that the indissolubility would be a message of Jesus." Specifically, the Cardinal describes the exegetes' debate falls on the interpretation of the word "porneia".
"Regardless of what this 'porneia' means, it shows that the Church had a problem and that what happens at the Synod on the Family, is not a thing of chasing for the pleasure of the time, but was a priority that was raised by a broad group of believers, yet it was already a problem in the early Church."
Text: Giuseppe Nardi
Image: Catholic Herald (Screenshot)
Trans: Tancred vekron99@hotmail.com
Link to Katholisches...
AMDG
Posted by Tancred at 8:00 AM

So, it's ridiculous to think St. Paul used the word in one very narrow sense only; it's an all-encompassing word. It refers to nothing that can be condoned.

I don't recall learning that Our Lord told the apostles to be diplomats.