Cardinal Müller: US Rebel Sisters Have Lost Their Identity -- More Women in the International Theology Commission 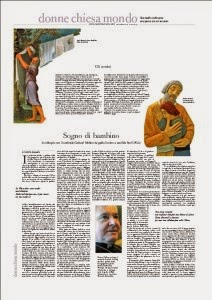 (Rome) The Prefect of the CDF, Cardinal Gerhard Müller, contrary to what is   widespread  of certain circles in the United States in connection with the rebellious nuns of the LCWR, that the Roman Curia is misogynistic. "We are not misogynist!" The cardinal said in a conversation with the woman's section of the Osservatore Romano . It is a matter, the rebellious nuns "to help them rediscover their identity." Cardinal Müller also announced that at the request of Pope Francis, the number of women in the International Theological Commission will rise "from two to five or six".
Since May 2012  a monthly supplement appears in the main Italian edition of Osservatore Romano   Women, Church, World . In the latest issue a conversation on  1 September  took place with Prefect Cardinal Müller. The former Bishop of Regensburg announced that the proportion of female members of the International Theological Commission shall tripled. This was the wish of Pope Francis, the Cardinal said in an interview with the responsible editor of the women's supplement, the historian Lucetta Scaraffia.
The International Theological Commission is one of the "young" institutions of the Catholic Church. It was established in 1969 by Pope Paul VI., as a result of the first Synod of Bishops, which took place in the fall of 1967. The task of the 30 strong Commissio Internationalis Theologica (CTI) is to "assist in the investigation of doctrinal issues that are of greater importance" to the Church's Magisterium, particularly the CDF. Therefore, it has been presided  the Prefect of the CDF  Cardinal Müller, since 2012.  Since 2011, it's Secretary-General has been  the French Dominican Father Serge-Thomas Bonino.

Increasing Share of Women in Theological Commission to "Five or Six"

The members are appointed by the pope for five years. The 8th Quinquennium ending in 2013 to be reappointed by Pope Francis has not yet occurred. The period 2009-2013  had  two female members. It is the German Domgatic Theologian and Professor at the University of Fribourg in Switzerland, Barbara Hallensleben, and the American nun and professor at the University of Saint Mary of the Lake (Mundelein Seminary) of Chicago, Sr. Sara Butler.   Sister Butler belongs to the Missionary Servants of the Most Blessed Trinity (MSBT), an American woman religious order which was recognized by the Holy See in 1932, but  whose origins already   go back to the year 1909. She teaches Christology, Sacramentology, Christian Anthropology  and Mariology in Chicago.
The appointment of the members of the 9th Quinquennium of the International Theological Commission by Pope Francis is imminent, as Scaraffia has reported. She only addressed Cardinal Müller indirectly at  this point : "He assured me the newly anticipated International Theological Commission, which is to be appointed by the Pope soon, will have a higher proportion of women than the outgoing: It seems to me as I understand that they will increase the number from two to five or six."

Accept Women in Their Character, Not as an Imitation of Men

The cardinal stressed importance of women in the Church and that they are to be recognized in their individuality in the Church, not in imitation of the male model. The Cardinal made a special point to emphasize that the Church is "mother" and must not be an institution because an institution could not love you, but a mother can love.
The Prefect also spoke to Scaraffia  about the American rebels,  Sisters of the Leadership Conference of Women Religious (LCWR). He himself had overseen  "complex negotiations" recently. Above all is to remember that it is "not all American women religious" who are  the rebellious nuns, but a group of religious women in North America who have partnered in the LCWR. The CDF had received "many letters" from other sisters that belong to the same Order, "but on the direction" of the rebel sisters are very disappointed and "deeply grieved".

Loss of Identity: Rebel Sisters Have "No More Vocations"

"Serious doctrinal problems" have reigned for years among the rebellious nuns of the LCWR  in the field of Catholic doctrine, Church discipline, liturgy, morality, right to life, homosexuality and gender ideology. Cardinal Müller  recalled in this connection: "In addition, these orders have no more vocations. You run the risk of disappearing. We have especially tried to build less conflictual relations and reduce tensions, thanks to Bishop Sartain," leading the talks on behalf of the CDF and is "a very gentle man," says  the Cardinal. The general aim was clear to the rebels sisters that "we are not hostile to women and do not want to eat a woman every day!  Without a doubt we have different understandings of religious life. We hope to help them rediscover their identity," Cardinal Müller.
Text: Giuseppe Nardi
image: Osservatore Romano
Trans: Tancred vekron99@hotmail.com
Link to Katholisches...
AMDG
Posted by Tancred at 9:22 PM

The LCWR shows that its members have lost the Faith. They worship some other god.

Thje International Theological Commission has made factual errors and Cardinal Muller has been associated with the ITC.He overlooked the errors and still does so!

September 1, 2014
Balamand Declaration and the Factual Error in the Catechism of the Catholic Church
http://eucharistandmission.blogspot.it/2014/09/balamand-declaration-and-factual-error.html

It would impossible for Cardinal Muller, prefect of the CDF, not to be associated with the ITC.

That is because the prefect of the CDF is also ex officio president of the ITC!

Let's get some real diversity, say, one faithful sister each from Korea, China, a beleaguered Moslem land, and Africa. A bonus appointment can come from Japan or Taiwan. Throw in an Orthodox nun for the sake of ecumenism, if you must.