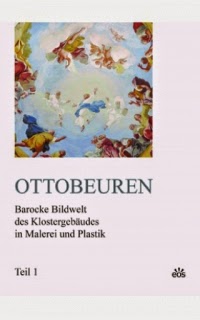 The Upper Swabian Benedictine abbey Ottobeuren is celebrating its 1,250th anniversary this year. On this occasion the monks, with at personal expense, and generous financial support from outside, have produced a two-volume book project entitled "Otto Beuren. Baroque Imagery of the Monastery in Painting and Sculpture ," published  by the EOS-Verlag. In hundreds of pictures - which are a bit too small, unfortunately, in some rare cases - the Publisher presents paintings, statues, stucco and other artistic features, which have given the Abbey  worldwide fame.  Almost everyone should know the problem of looking at a painting and recognizing its beauty, but what is represented is not really being  deciphered. The two illustrated books provide expert comments and explanations, which often open up new dimensions for the reader.
Founded in 764 it is the story of the Abbey, which was dedicated to St. Alexander and Theodore, closely connected with the history of the Holy Roman Empire of the German Nation, which existed in about the same period. The founders of the monastery were the Alemannic noble couple Sylach and Ermiswinth whose son Toto a little later, was the first abbot of Ottobeuren. Already in the tenth century the Imperial City was obtained by Bishop Ulrich of Augsburg, but the advocacies were only removed in 1710 from Abbot Rupert Ness by the Bishop of Augsburg.
The baroque monastery of the 18th century, as we still know it today, has the enormous size of 480 by 430 meters and this is due to the initiative of the aforementioned Abbot Rupert Ness. The full imperial immediacy (Reichsunmittelbarkeit) meant that Abbot Rupert was full state and court master of an area of ​​around 265 square kilometers and about 10,000 residents. The rich immediate status of Ottobeuren explains the magnificent interior of the building, which of course not only had to serve for monastic life, but also the administration of the territory of the abbey.
Nevertheless,  the secular did not push the spiritual  into the shadows: "Only apparently did  the secular manorial features outshine the monastic elements of the Ottobeurer monastery structure, because the cloistered areas for are inaccessible to laymen; they belong 'to the monks.' That it was the kingdom of prelates and feudal lord, Abbot Rupert Ness, was above all in the beginning much less the representative of the Imperial Abbey and more about the Benedictine community, as the genesis of the new building began in 1711; in the care of his confreres Abbot Rupert first built functional cells refectory and kitchen build and equiped the south east quadrangle.  "In addition, the financial balance sheet  was not burdened by excessive pomp by the monks, as it was elsewhere often the case." Despite immense expenditures for construction and equipping of the monastery, they were able to accumulate no debt."
Text: Benedict M. Buerger
image: publisher
Trans: Tancred vekron99@hotmail.com
Link to Katholisches...
AMDG
Posted by Tancred at 8:36 PM