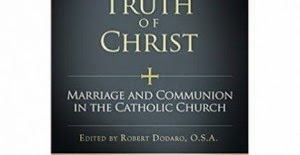 (San Francisco) In the U.S., the forces are forming  on the currently controversial issue within the Church,  to defend Catholic doctrine and resist the attack embodied by Cardinal Walter Kasper. According to the U.S. Dominicans, a second polemic  followed  within a short time. The U.S. Catholic publisher Ignatius Press has announced the imminent publication of an important book in defense of the traditional teaching on the sacrament of marriage and priestly life. The book is in the original English title Remaining in the Truth of Christ, but will appear in all major European languages. The publication shall be made just in time before the Synod of Bishops on the Family in October.
The book collects basic statements of five cardinals and four university professors that contradict the "Theses" by Cardinal Walter Kasper on 20 February that the Church should   "harmonize the practice in faithfulness and mercy" the remarried and divorced. Ignatius Press was founded by Ratzinger student, Jesuit, Father Joseph Fessio and is led by him. Father Fessio belongs to the Joseph Ratzinger Schülerkreis.
Text: Giuseppe Nardi
image: Ignatius Press
Trans: Tancred vekron99@homtail.com
Link to Katholisches...
AMGD

Good for Ignatius Press for giving a go at defending Catholic doctrine. Pretty impressive considering that their publications are not exactly pure of the Faith. Even mailings from IP have been forbidden in our Catholic home for some time now because of their promotion of neoCatholic, Modernist papal documents and completely devoid of the writings of faithful popes, even those crowned with the halo of legitimate sainthood. Especially not Pope Saint Pius X. Yet they have several items promoting...Pope Francis? Yikes!

So good on them for attempting to defend the Church but they are ill equipped for the task and if they get a good look at the face of the Church's foe they will have to say "I have met the Enemy and it is we."

I am rather surprised, pleasantly, considering Father's defense of Old Liberal prelates in the past, to see him actively attacking them now.

And who are the five cardinals? I have been hearing about this book and all I hear is five cardinals but no names. Does anyone know who they are? I just want to see how long it takes for Francis to crush them.

No doubt one is Burke, and Francis has already begun the crushing of him.

They probably want people to buy the book.

Does anyone know the actual names of the authors of the book?

It's a collection of pieces edited by a Father Dodaro.

lifted from Fr. Z's blog, here is a list of chapters & authors:

Divorce and Remarriage in the Early Church: Some Historical and Cultural Reflections - John M. Rist

Separation, Divorce, Dissolution of the Bond, and Remarriage: Theological and Practical Approaches of the Orthodox Churches - Archbishop Cyril Vasil’, S.J.

Unity and Indissolubility of Marriage: From the Middle Ages to the Council of Trent - Walter Cardinal Brandmüller

Testimony to the Power of Grace: On the Indissolubility of Marriage and the Debate concerning the Civilly Remarried and the Sacraments - Gerhard Ludwig Cardinal Müller

Sacramental Ontology and the Indissolubility of Marriage - Carlo Cardinal Caffarra

The Divorced and Civilly Remarried and the Sacraments of the Eucharist and Penance - Velasio Cardinal De Paolis, C.S.