National Pilgrimage of the German District of the Society of St. Pius X to Fulda to Renew the Consecration of Germany to the Immaculate Heart of Mary 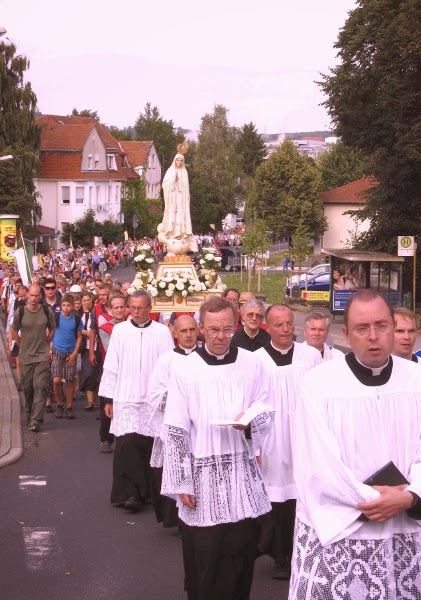 For the 11th  year, the German District of the  Society of St. Pius X. has organized its a pilgrimage to Fulda for the 6 and 7 September. It was introduced in 2004 for the annual renewal and the consecration of Germany to the Immaculate Heart of Mary, which was completed in 1954 for the first time in Fulda by the bishops of Germany.
This year's pilgrimage takes as  its subject the life of the Sacrament of Holy Eucharist, against the background of the  100. anniversary of the death of the great Eucharistic Pope Pius X.
The pilgrimage begins on September 6 at noon at 12.30 in the center of Fulda in front  of the castle with a Marian procession through the city and surrounding area.
The venue of the two-day prayer meeting is the ballroom of the old Orangerie, in the castle garden (Maritim Hotel). There, a first solemn High Mass in the traditional Latin Rite will be celebrated on Sat evening at  6:30. At night the members of the Catholic youth movement  will hold a prayer vigil before the altar, which is built in the Orangerie.
On Sunday morning at 8:00  the day's program begins with a talk on the pilgrimage theme, which is followed by a solemn Pontifical High Mass at 9:30, which will be said by the Superior General of the Priestly Fraternity of St. Pius X, Bishop Bernard Fellay.
The grand finale is the prayer of Consecration to Mary, as the   pilgrims who come from all parts of Germany will again commend their fatherland to  Maria.
It is an open event for all Christians who want to endorse the concerns of pilgrimage. There are about 800 people expected for the Mary procession, for the High Mass on Sunday morning, there will be up to 1000 participants from all over Germany.
For more information: www.deutschlandweihe.de
Text: PM / LS
Image: Pilgrimage Office
Trans: Tancred vekron99@hotmail.com
Link to Katholisches...
AMDG
Posted by Tancred at 8:31 PM

This is so wonderful, so Catholic. In fact it is only with the SSPX that I even recognize the Catholic Church. Untainted, uncompromising Catholicism. This is why they get my support. And my gratitude!