Muslims Attack in Utrecht: "We Will Kill You Christians" 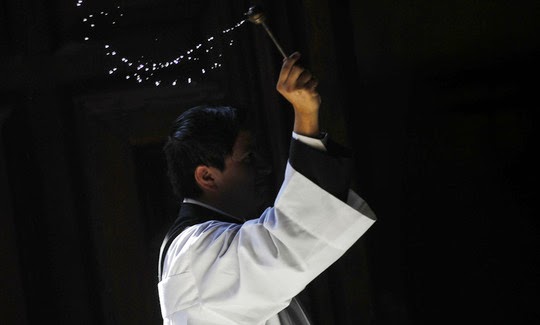 12.08.2014 | 16:33 |   ( The Press )
The Hague . A Catholic seminary student from Colombia has been threatened and spat upon in Utrecht by radical Muslims: Brother Jaider Chantré Sanchez who upon just leaving  church on the weekend, while walking alone through the park when two Muslims began to pursue him, cursing and spitting . They are supposed to have shouted, "We will  kill all of you Christians."
"I was so scared. It is the first time something like  that's happened to me,"    Chantré Sannchez recently explained in the newspaper "De Telegraaf ". "I was told in Colombia, the Netherlands is a tolerant country. But this does not seem to be so," continued the student, who was able to escape. The attacker had apparently been traveling to an anti-Israel demonstration.  Yet Sanchez believes he has an explanation as to why they had become so aggressive, however, with this explanation: "I wore a T-shirt with the logo Nasrani. This is used by the IS-terrorist group in Iraq to mark houses of Christians. Many Christians wear those shirts now in solidarity with their fellow Muslims in Iraq. The logo must have seemed to the two Muslims like a red flag."

The incident causing quite a stir. "When you are wearing a T-shirt and are threatened, anyway, that is unacceptable," said Hans Zuijdwijck, a spokesman for the Archdiocese of Utrecht. The incident shows how heated the social atmosphere is in the Netherlands. So it was in The Hague in the recent days demonstrations, where fans of the IS-terrorists, who murder and pillage in Iraq, as they shouted slogans such as "Death to all Jews". As citizens marched in a counterdemonstration, they were attacked by the Islamists.(Htz)
("Die Presse", print edition, 13/08/2014)
Translated: Tancred vekron99@hotmail.com
Link to ...
AMGD
Posted by Tancred at 11:41 PM

The Catholic Church has been asleep, drunk and inebriated from the sweet poison of easy evangelism. At least, the larger part. Some have been vigilant, the crazy fringe group who says this was going to happen, they say.

Well, the "crazy fringe group" turned out to be right. Eyes are rolled, and the issue keeps being ignored.

Muslims are invaders into Christendom, because they have no intent in conversion. "Pious nonsense" the Pope allegedly said!

There are three ways you deal with invaders:

Christendom has been giving Muslims what they want: land, rights, freedoms, prosperity, and now all that is left is the souls of Christendom. Are you going to give them that too? If you are a secularist, then all they want is your life.

A traditional Christian response is to expel the Muslims, drive them out of their homes, their businesses, and into the ocean like the many swine possessed by Satan.

And the grim solution, if they are so adamant, is to kill them all, and let God sort out the good from the bad. That's what happened against the Cathars and the Albigensians, and now there are no more Cathars, nor Albigensiasn. Perhaps, some day, there will be no more Muslims.

European secularists are inflicted with a mental illness known as liberalism. They stand for nothing, they are dogmatically non-dogmatic. They are subconsciously suicidal and all their actions result in entropy and destruction. Unlike the communists who genuinely wanted society to prosper, modern socialists are morally bankrupt and have nothing to kill or die for.

Europe's only worldly hope is that parties like UKIP or National Front get elected and start deporting these invaders. The tax system should also award families who have more children, the comically evil IMF hates income splitting for a reason.

The Church is firmly in support of the European left wing agenda. Once the European right-wing backlash takes power they won't be Catholic, they'll be pagan. Instead of getting Franco or Salazar we will get Hitler or Mussolini, this will be the fault of the apostate Catholic hierarchy. Mohammedan or no Mohammedan, left wing or right wing, the Catholic hierarchy's spiritual holocaust will continue.

If you are a member of the Church, you will work towards Christendom, because you are not Italian, English, French, German, American, and so forth- These are modern inventions; we are first citizens of Christendom and it is only when we have an independent identity, one that puts God above the accident of nationality, that we can really effectively do the Lord's mission left to us.

Look at Spain, for example; what a great boon she had done for Christendom, a continent and a half, converted to Christ, away from their strange gods- yet due to masonic, secular influences even Spain has fallen; and now, her king does not even reference our God and His Church, for which his ancestors poured sweat and blood.

Christendom has Christ as King, not some temporal emperor, or other prince- they, throughout history, prove their infidelity, from David to Henry VIII.

The spiritual life of temporal princes is as varied as the lives off the men they lead, but you forget the Queen Isabellas, Jan Sobieskys and the Alfred the Greats without whom Christendom would never have existed.

There are too few princes who are "good"; Isabella and Saint Louis and all others were good, not because of their own merit, or God forbid, the power God allowed them to hold and exert, but because they recognized that Christ is their King, their Emperor, and all the good they have done is as light reflected upon a clear and clean mirror.

They are as sinful as we are, and they recognize it; yet most princes consider themselves "Enlightened" if not "God-Kings" many years before the coming of Christ, and after His Ascension. "Enlightened" Monarchs, or even lesser aristocrats do not destroy evil when, in the name of tolerance, they allow it to spread or even advance it.

I do not deny the influence and existence of good princes; but I am likely to be convinced of their sinfulness.

Yet I still would rather have a sinful king or queen to follow- they come and go, than be forced to follow the laws created by a mob of degenerates who think their opinions are valid merely because they have the freedom to express it.

Ultimately, Christ is King, and whether Monarchy or Democracy, if Christ is not recognized King, then that society is headed to destruction in all manner.

If you say there are "too" few, you probably don't read much history, or are reading the wrong history.

I'd prefer to be pleasantly surprised than horribly disappointed.

When Felipe VI became king, I was not surprised, nor disappointed.

When Hans-Adam II fought against pressure to make abortion decriminalized in his principality, I was pleasantly surprised.

With regards to History?

Look at the kings before and even immediately after Christ; God-Kings, perverts, war-mongers, tyrants.

Look at the Christian kings: they often were at war with each other, the exception being those at war with Muslims or other infidels; if not, they clashed with the Church to the effect that when Protestantism reared its ugly head, it was easy for those princes to easily say "Maybe we don't want to be Catholics anymore!" That's a huge chunk of Europe there!