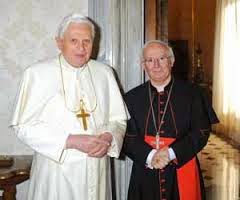 Cardinal Cañizares with Pope Benedict XVI
(Rome / Madrid) It had already been written for a few days. Now the confirmation has been made. Pope Francis today named Archbishop Carlos Osoro of Valencia as the new Archbishop of Madrid. The deposition of Cardinal Antonio Cañizares Llovera, Prefect of the Congregation for Divine Worship and the Discipline of the Sacraments by Pope Francis was already expected a few weeks after the recent conclave. Now the Argentine Pope is sending him back to Spain as the new Archbishop of Valencia. The decisive factor is not in the move, the in rank is more like a demotion, but a reposting away from Rome.
So, this is the  second dismissal of a prefect of the Roman Curia, which was expected by observers since the late spring of 2013. With the election of a new pope all offices of the Roman Curia are forfeit.  In the course of his staff restructuring of the Curia, Pope Francis removed those two from a total of nine prefects. Their understanding of the Church was the closest to Pope Benedict XVI. Cardinal Mauro Piacenza was already  replaced as Prefect of the Congregation of Clergy on September 21, 2013. Today, even the delicate department the Holy Liturgy and the Sacraments follows. Delicacy, not least because of questions as to how Pope Francis has exhibited low liturgical sensibility.

Liturgical Abuse for Francis is No Offense? - There is Already the Liturgical Dignity of the Old Rite

While the Pope previously confessed no connection to criticism the widespread liturgical abuses especially in the West, he had repeatedl incomprehension, yes even a recognized aversion to the traditional Roman Rite, especially against the faithful who adhere to this rite.
That there would never have been a  Motu Proprio under Pope Francis, Summorum Pontificum, with which Pope Benedict XVI. 2007, corrected the liturgical reform of 1969, the imbalance in the innermost core of the faith and gave the traditional Rite far reaching rights of citizenship and equal rights in Church law again in addition to the Novus Ordo, is not doubted in the even more broad environment of the Argentine incumbent.

Cardinal Piacenza and Cardinal Canizares Whom Pope Francis deposed as prefect of a Roman Congregation
The aversion towards the efforts of his predecessor was already visible during his first public appearance, against attempts in the  Church to reclaim the understanding of the sacred, continues with the deposition of Cardinal Cañizares. A replacement has not yet been made. Traditionally connected circles harbor fears. Among the candidates in the past year most frequently mentioned, there was also Curial Archbishop Piero Marini, the [evil] papal master of ceremonies of John Paul II.

Too Close to the Understanding of the Church of Benedict XVI.

Cardinal Piacenza was connected with the  attempt of Benedict XVI to provide the clergy with  Saint John Mary Vianney, a saint, as a model, who was anchored steadfastly in the traditional churches and religious understanding. A "priest in the pre-Conciliar image", which has been so violently resisted within church,  so violently that the attempt failed.
Cardinal Cañizares was connected with the effort of Benedict XVI.  to strengthen the sacredness of the liturgy and to reinforce this effort mainly by the appreciation of the traditional Rite. Benedict XVI. not only ended the monopoly of the Novus Ordo, he put it  under pressure through the Vetus Ordo. In fact, the papal action bore immediate fruits worldwide. A process that  has been increasingly put to a halt by the election of Pope Francis. Critics have blamed Cardinal Cañizares, of scarcely responding to liturgical abuses in the Novus Ordo.

Lack of Understanding of Liturgical "Restoration"

With personal integrity, but not particularly combative, the cardinal celebrated several times in the traditional form of the Roman Rite, as well as in autumn 2012 on the occasion of the first International Pilgrimage of Tradition to Rome . It was the first time since the reform of the liturgy that it was celebrated at a main altar of St. Peter again in a larger scale Sacrifice of the Mass in the Old Rite. 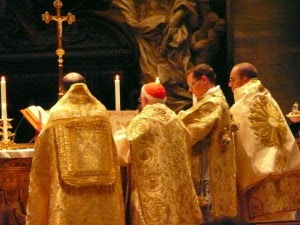 Cardinal Canizares Celebrated the Old Rite in 2012 in St. Peter's Basilica
Cardinal Piacenza had just turned 69  at the time of his dismissal. Cardinal Cañizares is 68. Neither the one nor the other cardinals were close to retirement age. Both were, as it is custom of the Church, resigned with melodious and prestigious offices.  However, the key point to the line-up of changes, is the underlying directional decision. Pope Francis wants to correct the pontificate of his predecessor, Benedict XVI not only by gestures but by facts. But  that is why he was ultimately chosen.

Antonio Maria Cardinal Rouco Varela, the former Archbishop of Madrid,  is retiring  from office because he has reached the age limit.  As usual under Pope Benedict XVI. he  left him two years longer in office. It was just another year, because Pope Francis wanted to take sufficient time  for this personnel decision. Spain plays a more important role in the Spanish-speaking world, to which Argentina is one,  than other European countries.
Cardinal Rouco Varela was a determined opponent of the socialist Zapatero government and its social policy. Because of his personal weight and as chairman of the Spanish Bishops' Conference he exercised a decisive influence on the appointment of bishops in Spain. Politically, he was close to the right wing of the bourgeois Partido Popular (PP). But that's not currently the acting Prime Minister Mariano Rajoy, whose search for a  majority would prefer a quiet Church.
Text: Giuseppe Nardi
image: 30Days / MiL / Asianews / Le Forum Catholique
Trans: Tancred vekron99@hotmail.com
Link to Katholisches...
AMDG
Posted by Tancred at 11:08 AM

I think there is a mistake in the headline. Surely it should read "Liturgical Insensitivity".

Cardinal Cañizares is not traditional. He is known for supporting and promoting the Neocatecumenal Way and for trying to get their "mass" approved.

Modern progress=one irritation is replaced by another one.

Anonymous is a liar! I am calling you out. Cardinal Canizares is traditional and Pope Benedict put him in charge of the Cong. of Divine Worship to reform the terribly flawed novus ordo liturgy, to open up the availability of the Tridentine Liturgy, and crack down on other Sacramental abuses. Cardinal Canizares nickname was, " little Ratzinger". His removal by francis of the poor is huge and paves the way for the new changes to come for the novus ordo liturgy, which, Ven Bishop Fulton Sheen, spoke about in 1950. A counter church will be set up, a religion without Christ, a church without a cross. A one world religion which will be worldly euchumenical. Wake up people! Francis of the poor is deceiving you!

It's his opinion, which is probably as valuable as it was freely given.