Little Caterina Offered Her Illness For the Franciscans of the Immaculata

(Rome) Caterina Maria Sudrio, the youngest of ten children, was born on 1 June 2006 in Benevento, that southern Italian city, which is famous for the Battle of Benevento, which battle as known in German speaking lands that finally brought the dream of the Staufers to an end in 1266. The city was appropriated by the Pope in 1053 from Emperor Henry III., where the Pope renounced his rights in Bamberg. The city remained papal  until the time of Napoleon.
At the age of only four years, the small Caterina asked with a serious tone to confess to Father Pietro Maria Luongo of the Order of Franciscans of the Immaculate. The girl had been Christened by Father Stefano Maria Manelli, founder of this Order. From him she received on Christmas 2011, at the tender age of only five and a half years her First Communion at  High Mass in the traditional, Tridentine Rite. The decree Quam Singularities of St. Pius X from 1910 states: "What is valid for confession as a distinguishing age is when one can distinguish between good and evil, that is, has reached a certain use of reason, we must  open Communion for the same distinctive age  if the Eucharistic bread can be distinguished from an ordinary bread."

Every Evening at the Eucharistic Blessing

Every evening Caterina emphatically wanted to receive the Eucharistic blessing in the Sanctuary of Our Lady of Good Counsel at 7:20 in Frigento, which is the mother house of the young Franciscan Order. The serious illness that  affected her young body, she sacrificed in full awareness for Father Stefano Maria Manelli and the Order of the Brothers and the Sisters of the Franciscan Friars of the Immaculate.
Caterina's favorite movie was "The Secret of Marcellino ", a Spanish production from the year 1955.  Marcellino the orphan is placed in the 18th century as an infant on the doorstep of a Franciscan monastery. The brothers take on the child. One day, the boy discovered a large crucifix in the attic of the monastery. He is overcome with great pity on the emaciated Jesus hanging on the cross. He secretly steals some bread and wine in the monastery and brings them to the crucified.  The crucifix comes to life before Marcellino, takes the bread and wine, at which point the Eucharist, and instructs the boy in the Christian faith. Again and again, the boy returns to the attic, because the man on the cross attracts him and he regularly brings to the Lord some bread and wine from the monastery inventories. The brothers notice the theft and are looking for the cause. Marcellino wishes, meanwhile, to see his mother (of whose death he obviously knows) and also the Mother of God, Mary. The Crucified takes the boy in his arms and tells him to sleep. In the arms of Jesus, the boy falls asleep happy and dies. The Franciscans, who had advanced in their search for the missing food up to the attic,  then see a radiant light shinning through the slatted, which gives a heavenly luster to the lifeless body of the boy.

The film follows the nove l "Marcelino Pan Y Vino" by Spanish author José María Sánchez Silva. In 1955 he won two special awards at the International Film Festival of Cannes and the Silver Bear in Berlin.
In the film, a Franciscan told in a flashback, the story of young Marcellino to a dying girl. Caterina, who knew herself to be mortally ill, thus  may have been touched by this movie.
Her favorite song was "Preferisco il Paradiso " (I prefer the paradise), which she had heard in a two-part TV movie produced in 2010 on the life of St. Philip Neri. In the television broadcast of the film, which reached viewing figures of 23.9 percent (first part) and 27.4 percent (second part). The pious joy of the Saint,  his cheerful nature and his deep piety impressed and thrilled the small Caterina.

The Deadly Disease and Its victims 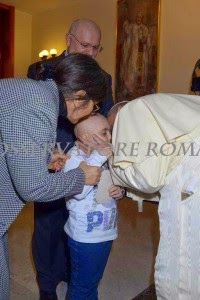 Caterina with Pope Francis
Parents and doctors should remember when they talk about Caterina, with admiring astonishment that she never complained about her illness, a malignant epipheochromocytoma.  When she was asked how she was, she always replied "good" and smiled. As soon as she could talk, she repeated again and again that Jesus came to bring joy, because without love, it is difficult to grow.
In summer 2012, her fatal illness was diagnosed. She knew that she would die. On Saturday, July 26, the Feast of St. Anne and Joachim, the parents of the Virgin Mary, God willed to take  Caterina at 9 O'clock in the morning at the age of eight years. Consummatum est !
The parents of small Caterina Maria Sudrio, Francesco and Rosaria of small  are Tertiaries of the Franciscan Friars of the Immaculate, while three older sisters are the Franciscan Sisters of the Immaculate Conception . So, the little Caterina was familiar with the Order from an early age.  So it was she who one day said she wanted to sacrifice her illness and her death for this order.
Her situation had touched many hearts. On January 23, 2014, she was even received by Pope Francis (see picture)
On June 1,  small Caterina celebrated her eighth  birthday with her family and many of friends and with her brothers and sisters from the Order. On 9 March, she had received at her express request, and with special permission, Holy Confirmation.
"She will intercede for us all" it says in the brief statement by the Franciscans of the Immaculate on Caterina's death, which ends with the words: "The flowers grow from the earth and they return to the earth, but their fragrance rises up to heaven."
Text: Giuseppe Nardi
image: Chiesa e Postconcilio / Osservatore Romano
Trans: Tancred vekron99@hotmail.com
Link to Katholisches...
AMGD

Email ThisBlogThis!Share to TwitterShare to FacebookShare to Pinterest
Labels: Divine Intervention, Franciscans of the Immaculate

Little holy Caterina, you loved the Lord so much in your short life and now you are with Him for eternity! Please do intercede for the holy Franciscans of the Immaculate: that they be restored to Fr. Manelli and his direction. Let the others go their way but may the holy Institute be restored so they can continue their missionary efforts and bring souls to Our Lord and Our Lady.

May God bless her soul, which was so filled with love for Him during her short time on Earth. Pray for us, Caterina. +JMJ+

Is she so poor? I think she was very rich .....too rich for this world to hold her.

Fr.Fidenzio Volpi,OFM cap., and the Franciscans of the Immaculate need to be asked what is their position on this issue. Do they still interpret Vatican Council II with an irrational premise?

August 6, 2014
I do not use an irrational inference, a false premise, so there is no discontinuity between Vatican II and Tradition
http://eucharistandmission.blogspot.it/2014/08/i-do-not-use-irrational-inference-false.html#links

May she rest in peace. What a great witness!

Dear caterina, please I am begging you to pray not only for the friars and sisters of the immaculate, but most specially for the conversion of my brother r.marie. Let your first miracle be his change of heart, that heart which will seek the love of God. Thank you