„Doppelgänger“ of the Pope Will be New Archbishop of Madrid 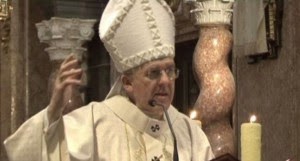 (Madrid / Rome) Archbishop Carlos Sierra Osoro of Valencia will be the new Archbishop of Madrid. This is apparently confirmed by  Spanish government circles, according to Spanish media. An official appointment by Pope Francis has not yet been posted. Will Antonio Cañizares Llovera, who is Cardinal Prefect of the Congregation for Divine Worship be appointed as the new Archbishop of Valencia?
Archbishop Osoro, was born in 1945, initially working in parish ministry, was then rector of the seminary of his native diocese of Santander and at the same time vicar general of the same. He was appointed in late 1996 by Pope John Paul II., Bishop of Orense, promoted to bishop of Oviedo in 2002 and 2009 he was appointed by Pope Benedict XVI.  to be Archbishop of Valencia.

"I'm Neither a Conservative Nor a Progressive"

For the Spanish media, Archbishop Osoro because of a certain similarity, is considered to be a "Doppelgänger" of Pope Francis. When asked whether he was a "conservative or progressive,"  the bishop replied: "Neither the one nor the other. It is certain that a man of the Church must be a man of dialogue. If it is progressive, it is to be faithful to the apostolic succession, like Benedict XVI. and before him John Paul II., to be a man of unity with the other bishops, to validly present  Catholic doctrine, and the Catechism, then I am progressive. "Catholic observers describe the archbishop as "sympathetic", "affable", "not partisan." He apparently has with that "all the properties that favor him for a career. A statement on his disposition and performance is thus did not connected," said José Francisco de la Cigoña.

Question of the Rite Must not be "Ideological"

As Archbishop of Valencia Msgr. Osoro has demonstrated particular attention to the poor. The promotion of priestly vocations has led to an increase in the numbers of seminarians. In the last academic year, there were 17 new entrants. Regarding  the traditional rite, the Archbishop of Valencia said: "The extraordinary form of the Roman Rite was the Apporbation of the Pope to the Ordinary form. There is no problem. Where there is a need, you only need to ask. But you can not consider the rite ideologically: Progressive and Conservative. It is important to recognize the doctrine of the Church, which is able to unite Christians of different sensitivity in the same Mass. "

Who Follows as Archbishop of Valencia

Since 2014, Archbishop Osoro has been  Vice President of the Spanish Bishops' Conference . The transfer to Madrid has predestined him in the next term of office for the presidency of the Bishops' Conference. Meanwhile, in Spain there is speculation as to whether Cardinal Antonio Cañizares Llovera, Prefect of the Congregation for Divine Worship is to be appointed as the new Archbishop of Valencia. The speculation about the Spanish Cardinal has been engaged since the recent conclave because of the not very pronounced sensitivity of Pope Francis for the liturgy. It has encouraged them, because the Pope  Cardinal Canizaresas is the only prefect of a Roman Congregation who has not yet been confirmed in his office.  Cardinal Cañizares comes from the Province of Valencia.
The Church thinks over long periods, which is why decisions about appointments  can be corrected with difficulty to move in a certain direction." It took too long to replace the bad Montini-episcopate in Spain. The same would be required in Argentina to get rid of the Bergoglio-episcopate. "
Text: Giuseppe Nardi
image: antena3 (Screenshot)
Trans: vekron99@hotmail.com
Link to Katholisches....
AMDG
Posted by Tancred at 11:27 AM

I see poster Tanced again wishes to delete any any comment that disagrees
however slightly with his views.

We are stuck with these Francis doppelgängers or gang of dopes.

This isn't the Gay, Tell Blog. Why not go there, or stay there?

I happen to agree with a lot of what appeas on the Eponymous Flower.
You on the other hand drive contributors away with your irrational outbursts.

Then sign your name or be banished to oblivion. You're lying, after all, anyway.

I think his election has emboldened a host of Modernist demons.

dumbass is right....why not tank this guy already Tancred?

Not to worry - Jesus and his Church wins - keep praying - especially the St Michael prayer.