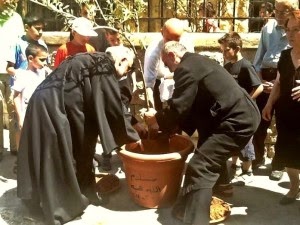 (Damascus) Last week was the parish of the Holy Trinity in Aleppo was the target of a brutal attack by  Syrian rebels. The parish church was attacked with a rocket that struck just in front of the church. Three Christians were killed, including two nuns. Now the priests and faithful have  planted an olive tree in response  at the point of impact, as a sign of peace and for the future.
"We had just celebrated the Holy Mass. Had the rocket hit the stairs to the church, the number of victims would have been much greater," said Father Joseph Bazouzou to the news agency Fides. Last Sunday, the priests and faithful of the parish gathered after the Sunday Mass, "to give the only answer to the bombs and the violence that for years always claims new lives," said the priest. As a symbol against violence and for the hope in Christ, they planted an olive tree at the point at which the Islamist rocket struck and took three dead. They wrote in Arabic on the pot: "Peace" and "God is love".
Since the outbreak of the civil war,  Christians have been the target of Islamist rebels. Christians are murdered, expelled, or forcibly converted subject to the Islamic dhimmi system.
While the West is silent or finances the Islamists and equips them with weapons, church organizations engage in concrete help.  Regarding the Prayer of the Fraternity of St. Peter for the persecuted Christians and the fasting and prayer of Cardinal Christoph Schönborn of Vienna has already been reported. Help for  needy Christians, who made ​​up 15 percent of the population, according to the Church historian Rudolf Grulich, until the outbreak of the civil war in 2012, comes from the Relief Organization, Church in Need .
Text: Giuseppe Nardi
image: Infovaticana
Trans: Tancred vekron99@hotmail.com
Link to Katholisches...
AMGD
Posted by Tancred at 9:43 PM

Email ThisBlogThis!Share to TwitterShare to FacebookShare to Pinterest
Labels: ISIS, Kirche in Not, Oriental Catholicism, Syria

Peace? God is love? That means what exactly? That will different things to different people. Sounds like something a pagan or hippie would say. These Catholics were martyred for their Faith. They should have written Jesus is God or May the Lord Jesus Christ forgive you your sin or Only Jesus is Lord. Now that would be crystal clear and understood by all.

Behold Him, who is Extreme Humility embodied. This may be the hardest thing for Christians to believe: that He is King, but when He walked with us, the fullest extent of His Kingdom was the beam of His Cross; His Crown were the piercing thorns upon his brow, that He came to us for that purpose and we did not respect Him.

When even those to whom He spoke and for whom He wept crucified Him, why are you perplexed that now He is still being persecuted?

But now, we must dare to praise and glorify God, even when His people are handed over to the unbelievers. Our victory is not on Earth. Yes, the gates of Hell shall not prevail, but remember those Churches of the Apocalypse: where are they now?

Why are you perplexed about the sufferings of those Christians? Perhaps they are being sacrificed for the sins of the West, for all our vainglory and arrogance and debauchery?

If it is the will of God that we must suffer, why do we object to the suffering of our fellow Christians? This is a disturbing question. But I know for certain, that God is the Master of Life and Death. His Will be Done.

Has big mouth Frank done or said anything about helping our brothers in the middle east or is he just going to use the Vac II approch and DAILOGE with these sons of SATIN.