With the Second Scalfari Interview, The First Interview Reappears on Vatican Webpage 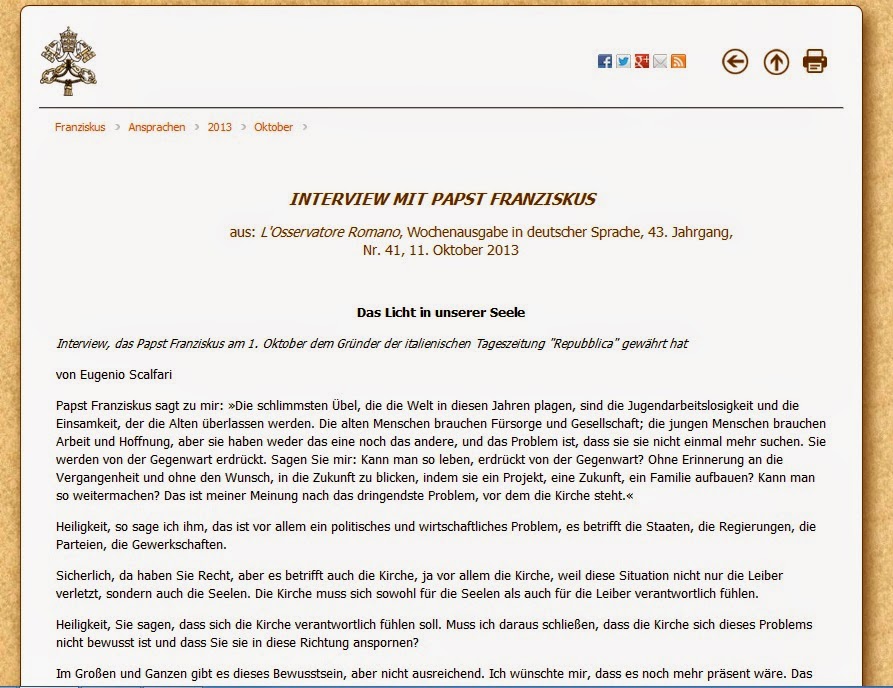 (Vatican) "Another interview of Pope Francis - and a correction by the Vatican" was the headline at Riposte Catholique in France. "New Interview by Eugenio Scalfari with the Pope. New manipulation. New denial by Lombardi” wrote Religion en Liberdad  in Spain. Catholic journalists can only shake their heads these days only  in disbelief about papal "press relations". The recent "interview" with Eugenio Scalfari, the known written  interviews itself, is an elusive sense of déjà vu, you do not want a priori to assume that these media "slips" of Pope Francis  are planned and are intended to be.
The Catholic website La Nuova Bussola Quotidiana (NBQ) wrote in Italy: "Scalfari has relapsed. For the second time he has published a fake interview with Pope Francis. This raises the question of why the journalist chamber which is so eager in other cases, has not yet intervened to condemn this kind of journalism. "But this is at best a side of the coin. What NBQ from inappropriate respect not ventured to ask: How is it that Pope Francis granted an interview for a second time after the experience of the previous year Scalfari? Obviously, Francis was quite satisfied with the “fake” Scalfari  statements attributed to him. Anyway, he is so happy to accept the same "fake" one more time.

What is the True Teaching of Pope Francis?

What actually corresponds to the actual teaching of the Argentine Pope? The officially published statements by the Vatican statements or the published interviews and phone calls in which the former Archbishop of Buenos Aires seems to feel far more in his element?
The first unconventional, rather irresponsible Interview of Francis with the Pope Eugenio was with atheist Scalfari, which was published on October 1, 2013, and printed in Osservatore Romano from full content. Without comment, it was first published on the website of the Holy See, which had  given the impression that it was part of the ordinary magisterium of the Pope. Only after one and a half months and severe irritation was it finally deleted in mid-November.

The Vatican Spokesman is Forced Into Egg Dance

Last Sunday Scalfari published a new "interview" with Pope Francis.  Even without knowing the content, not a few prelates in Rome were pulling their hair at the news.  And with good reason. The interview came into being in the same unusual and irresponsible manner as the first. This time, though, the Vatican responded promptly with a corrective statement. However, Vatican spokesman Lombardi had a breathtaking limbo between different degrees of confirmation and denial, partial acknowledgments and partial denial, accomplishing to simply amplify what the interview already had created: to cause more confusion.

Suddenly with the publication of the second interview, the first interview has appeared again and finds itself eight months after its deletion from the website of the Vatican yet again, being  put down under the "speeches" of the Pope. Who would not believe it, you can see for yourself ( here ). In the next few days of the release  will the new interviews  be put there  with the doctrinal statements of the head of the Church? Are the papal interviews ultimately part of the official Magisterium? What is  official reality, and what is real reality? The papal confusion shows its quirky side. Above all, there are creeping circles in the Vatican that support the papal reconstruction of the Church, its practice and thus insidiously, also its doctrine of belief.
Text: Giuseppe Nardi
image: Vatican.va (screenshot)
Trans: Tancred vekron99@hotmail.com
Link to Katholisches..
AMGD
Posted by Tancred at 3:53 PM

Your link to the scalfari interview of October 2013 requires one to log in which suggests that whilst still on the server it is not publically available?

What is the official reality? Officially apparently there's nothing official about Bergoglio's heresy. Bergoglio can walk and talk like a formal heretic and all on the pew-punters charity. ( Canon 1325 defines a heretic as a baptised person, still calling himself a Christian, who “pertinaciously denies or doubts any of the truths which must be believed with divine and Catholic faith.”) Bergoglio's denial that the Blood of Christ is the only covenant by which any soul is saved should qualify; so should his teaching that an individuals conscience need not conform itself to the doctrine and dogma of the Catholic Faith ; so should his denial of the mission of the Church - calling it 'solemn nonsense'; so should his public 'prayer' sessions with antichrist-religionists (denial of the Holy Trinity); so should his secular-humanism, likewise his marxism; so should his teaching that protestant 'brothers' are 'bishops' - denial of the Apostolic Body; so should his embracing Luther; likewise his telephone magisterium denying the indissolubility of marriage; likewise his public support of inherently disordered lifestyles - all these should be formal heresies, as to any ever 'officially' being recognised, even though these teachings are perverting souls left right and centre, well that's where our formal heresy might come in to play if we keep denying.

Publishing these scandalous interviews on the Vatican website is like waving the rainbow flag of heresy at the the throne of St. Peter or the white flag of surrender to the ruin of souls to Satan. God will not be mocked by this blasphemous hierarchy.

Sadly I must agree with your analysis.
It appears the groundwork is being laid for a serious schism that emerge as the doctrinal and church discipline fault lines widen.
It is no surprise this current pope surrounds himself with clearly heretical cardinals.

The silence of the worlds catholic bishops in the face of these grave spiritual dangers is puzzling but I expect will end only when clear doctrinal heresy formally manifests itself over the coming months during this Synod on the Family.

Catholics are being tested in this new pontificate as never before.
A clever modernist style pope in a manner never seen before has diminished trust in the papal office and the deeply conservative nature of the episcopacy is unable to confront the problem

Probably took it down again.

Apparently they are waving the rainbow flag of homosexual perversion on the Vatican website.

I just read on The Remnant website that this suddenly reappearance of the first scandalous interview....the one that just recently got put back on the Vatican website....oops, they've taken it down AGAIN.

These are Chris Ferrera's words from the article:

"Well, the same interview suddenly reappeared on the Vatican website this week, in both English and Italian, and was included once again among the Pope’s speeches. But, after this stupefying development was noted by Antonio Socci and the Mundabor and Chiesa et Postconcilio blog sites, the “interview” was removed again, and the link provided by these bloggers now redirects searchers to the Vatican home page.

"As Socci asked before the interview was taken down for the second time: “What is going on at the Vatican?” What indeed?"

Something quite dysfunctional is going on at the Vatican. Something sort of schizophrenic. I've never witnessed such insanity from Rome in all my 'born days.'

The thing is, as one cleric put it, Bergoglio isn't the problem, vatican II is; while the worshipped idol of the 'spirit of vatican II'remains the 'official' spirit of Catholicism, the pew-puntersand good priests are on their own.

well, not really on their own, God is the majority rule even if He only has one supporter. We have the magisterium and a few good men yet. Cardinal Pie predicted that the Church could, with too much heresy, be reduced to domestic and individual proportions. Are we there yet?