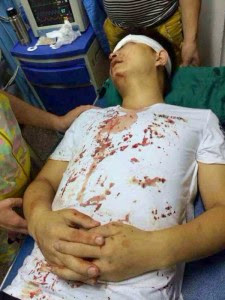 (Beijing) In China, the state is moving with force against churches and especially against "too visible" crosses. Christians have defended the cross of their church. 500 police officers took violent action against them. The bloody police action occurred last Monday at 3 O'clock in the morning in the district of Pingyang (Prefecture Wenzhou, Zhejiang Province). The number of injuries, including serious injuries, is considerable. However, the police had to withdraw.

"We are ready to go to prison and die for our faith," say the Chinese Christians and these are not empty words, as evidenced by the images of the defense of Shui Tou Church of Pingyang. Christians have formed a living shield to protect their church from destruction by the state. Many of them were beaten by the police and went to hospital for treatment. Some lives are in danger.

Wave of destruction against churches and crosses

The Protestant Church in Shui Tou is one of the officially recognized churches. Nevertheless, it is to be demolished because the communist regime for several months has engaged in a major campaign against Christianity. In some provinces of the People's Republic of China, Christianity is spreading rapidly. "Too quickly," according to the opinion of the dictatorial ruling Communist Party. For this reason, churches, crosses and other symbols that are "too large" and "visible" and other are to be removed. The Church of Shui Tou has also gone straight to the attention of authorities because of the large cross, which dominates it.

Therefore, Christians have guarded their church for 33 days around the clock. In the early morning hours of July 21st, it was time. At 3 clock in the morning, a large contingent of 500 police with a demolition squad prior drew around the believers. With batons, truncheons, fists and kicks, the police tried to disperse the Christians and to clear a path to the church. The attack lasted an hour. In the end the police had to withdraw. But there remained numerous injured Christians, many of whom had to be rushed to hospitals.

"In anticipation of martyrdom"

The pastor of the church left in protest, from the Protestant organization, loyal to the regime and began a hunger strike "in anticipation of martyrdom." In an open letter he writes: "My heart bleeds at the sight of hundreds of crosses, which are removed one after another in Zhejiang Province. Given the fierce attacks [the police], we are not sure that we can protect the church from destruction. I pray to God that he gives me the strength to be a martyr. "

"The growth of Christianity in recent years is excessive and disorderly," according to the Communist Party. The party is threatened by the increase of the Christians and their influence. The Wenzhou prefecture was an important Christian center of China before the Communist takeover. Before 1949, there were 115,000 Christians, almost one in ten of all Chinese Christians. Today the number of baptized Christians is, despite government persecution and oppression, estimated at 15 percent of the more than nine million inhabitants. It's a fast growing trend. Text: Giuseppe Nardi Bild: International Christian Concern AMGD
Posted by Tancred at 10:26 AM

God bless these well-intended people for being willing to FIGHT and fight to the DEATH for the Lord Jesus Christ! May God bless them with the graces of conversion and reward them all for their GREAT CHARITY towards Him!

I was in China two weeks ago and things are also getting harder for Catholics again. Had to do a run around the commies to baptize a baby - they are obviously starting to get scared. The Church is getting lots of young professional converts from Buddhism and Confucianism. The people know that communism is a busted flush.

Hail, glorious martyrs of the Cross!

Hail, the heavenly armies of angels and saints who proclaim unto The Most High:

"Holy, Holy, Holy, Lord God, Lord of Hosts! Heaven and Earth are full of your Glory! Hossanah in the Highest!"