The Lethargy of the Guardians of the Faith

The Catholic philosopher Dietrich von Hildebrand (1889-1977), known as a student of Edmund Husserl and a decided opponent of both Communism and National Socialism, defended in his published in book form, "The Devastated Vineyard" (Imprimatur Ordinariate Regensburg 1972)the Faith against time errors, but also ruptures from the inside. Not for nothing did Pope Pius XII. call him a "Doctor of the Church of the 20th century". 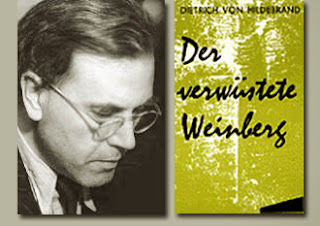 The first chapter of that work is about the lethargy - better failure - attributed to the Catholic bishops.

"The Power of Evil Lives on the Cowardice of Good"

The first part of this section is all about this motto, in the words of St. Don Bosco. Hildebrand explicitly points out that it is primarily those bishops he has in mind, who destroy the Church or want to turn into something else entirely: "I think of the much more numerous bishops who have no such intentions, but when action is necessary against heretical theologians or pastors or against a blasphemous disfigurement of the cult - they do not make any use of their authority. "These bishops close their eyes to the abuses and ignore all appeals that remind them of their duty to take action against the Church destroyer.."

They give the impression that they are afraid of something.

What are the bishops afraid of?

They fear being "attacked by the press or the mass media and being labelled as reactionary, narrow-minded, to be medieval different."

But the ultimate fear, which would be needed in terms of their own salvation, they do not know: "You fear men more than God."

The cause of this sickness of time (cowardice): "aggiornamento" (assimilation)

This disease is prevalent in the secular realm, "But that it has also penetrated into the church, is one of those terrible symptoms that the struggle against the spirit of the world has been replace under the slogan of aggiornamento aligned to a pacing with the zeitgeist. One must think of the hireling who leaves his flock to the wolves - if you think about the lethargy of so many bishops and religious superiors who are themselves still orthodox [in the sense of orthodox], but do not have the courage to intervene against the most flagrant heresy and abuses of all kinds in their dioceses or in their orders."

Question: What is the status since the publication of this book to the orthodoxy of most bishops? Some make proposals that clearly contradict the teachings of the Church - for example, they allow adulterers to Holy Communion. Or also, calling for are seeking respect for gomorrists: Are these bishops privately perhaps orthodox and just surrender in the face of public pressure against Tradition and the Magisterium?

The false victims of episcopal measures

But against those believers who fight for orthodoxy, who therefore do what these bishops refrain from doing as hirelings, take an authoritative and rigorous attitude. It was said in a letter from a high place, which was directed to an active group of fighters for the faith: "You have no other task than to be obedient to comply with all orders of your bishop."

The boundaries of ecclesiastical obedience

To make a claim to Catholics, is attached in those times in which no heresies in the Church happen without being condemned by Rome immediately. But they would be "unconscionable at a time in which heresies go uncondemned as they make their mischief in the Church and even bishops suffer from them without being deposed."

Conclusion The fidelity to the true doctrine of the Church is the parent of the devotion to the bishop.

SSPX'S POSITION HAS DRAMATICALLY CHANGED
The inference is not theology or a doctrine. To infer that the dead-saved with ' a ray of the Truth' is visible to us is an intellectual observation.

Upon this intellectual observation is built Professor Gavin D'Costa's theology, that all do not need to enter the Catholic Church for salvation.

So in Ad Gentes 7 one can infer that all do not need to enter the Church but only 'those who know' about Jesus and the Church and they are visible on earth.If they were not visible on earth, it would mean that all need faith and baptism for salvation (AG 7).There would be no exceptions. Only God can know who 'knows' about the Church (AG 11,LG 14) and who was in invincible ignorance(LG 16).When they are invisible for us they refer to implicit cases. They are not exceptions to extra ecclesiam nulla salus.

When Cardinal Gerhard Muller was asked about the dogma extra ecclesiam nulla salus , he said 'The Second Vatican Council also said this: Lumen Gentium 14 says: “Whosoever, therefore, knowing that the Catholic Church was made necessary by Christ, would refuse to enter or to remain in it, could not be saved.” 1 He is inferring here that 'whosoever knowing' refers to cases visible to us on earth. So they become explicit exceptions to extra ecclesiam nulla salus. This inference is irrational.It is the familiar visible-dead premise.

Once it is understood that the inference is false and irrational the canonical-status position of the Society of St.Pius X (SSPX) changes dramatically.

1.The SSPX affirm all texts and documents in Vatican Council II in accord with the traditional and literal interpretation of extra ecclesiam nulla salus.They affirm the dogma on exclusive salvation according to the Church Councils, the popes, saints,Fr. Leonard Feeney and the SSPX General Chapter Statement 2012.2

2.Nostra Aetate 2 (saved with a ray of the Truth) does not contradict extra ecclesiam nulla salus.Nostra Aetate is in agreement with the SSPX traditional position on other religions and salvation.

4.Ad Gentes 11 ( seeds of the Word) does not contradict the dogma on exclusive salvation, the Catechism of Pope Pius X or the Syllabus of Errors.

Irrelevant to the OP.