Rabbi Skorka: Pope Francis and Judaism -- “We Dreamt, We Embraced in Front of the Wailing Wall" 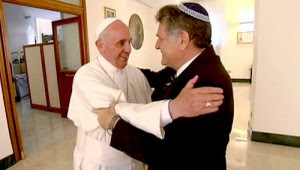 (Buenos Aires / Jerusalem) Will Pope Francis meet the “mother of his personal faith" in Judaism?  That, at least is what   his Argentine friend Rabbi Abraham Skorka in an interview with the Jesuit magazine Civilta Cattolica. Pope Francis arrives in a few days with a colorful entourage to the Holy Land.
The Catholic Church leader is not only accompanied, as usual, by cardinals and bishops of the Catholic Church, but this time also the honorary chairman of the Orthodox Churches, the Ecumenical Patriarch of Constantinople,   Bartholomew I. However, the most importantly will be  a personal friend of Jorge Mario Bergoglio, the Argentine Rabbi Abraham Skorka. The Vatican soon made ​​aware of a risk. The very obvious presence of a Jewish representative in the entourage of the Pope, who has   direct access to the Pope, boasting numerous interviews, could trigger irritation in the Muslim world in the Middle East.   Above all, the Muslim Palestinians could feel resentment . So there was a search  for an additional, Muslim travel companion. It is Omar Abboud, who will be the  representative of the Islamic community in Argentina. Abboud is a former Secretary General of the Islamic Center of Argentina . 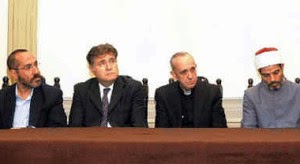 Vatican spokesman Father Lombardi said the Pope was accompanied by a Jewish and a Muslim agent with whom he is already in “a friendly dialogue” in Argentina .  In fact, Archbishop Bergoglio, Rabbi Skorka and Abboud took part as head of the Islamic Centre in the last ten years prior, as  the Pope's choice in numerous joint events part that stood as a  sign of inter-religious dialogue and were largely initiated by Cardinal Bergoglio.

Skorka About Francis: “We Dreamed of Embracing Before the Wailing Wall"

While Abboud was invited in April to come along on the trip has so far refrained from publicity, Rabbi Skorka has engaged in intense media activism since the election of Pope Francis.  In his recent interview for the Jesuit magazine Civilta Cattolica (Volume 3934 v. May 17, 2914: D he Pope, the Rabbi and the Holy Land ), he said: "Since the election of Francis we have met three times in Rome.”  In one of these meetings, "we began to dream of standing together in front of the Wailing Wall, embracing, to give you a sign despite the two thousand years of disagreements between Jews and Christians, and that I accompany him to Bethlehem to be close to  his mind  in such an important moment,  as a gesture of friendship and respect, to give all peoples and nations of this region an indelible sign of peace."
The interview with Rabbi Skorka led chief editor Father Antonio Spadaro, who led a now famous, but also controversial interview with Pope Francis last fall. Skorka also spoke of how Pope Francis see Judaism: "At the first meeting he said, pointing to me and pointed with his hand up: 'Our friendship and dialogue is the sign that it is'. And I added: 'You can create the path that leads to peace and the Rome and Jerusalem brings together more closely.' "

Skorka: "Bergoglio sees in Judaism the Mother of his Personal Beliefs"

In a conversation between Father Spadaro and the rabbi several names are called as witnesses for the Jewish-Christian dialogue, including the retired Archbishop of Paris, Cardinal Lustiger. There are also  publications mentioned considered  by the Pope as  fundamental to the Jewish-Christian dialogue.  According Skorka prevails in Pope Francis especially "an expectation of the church to a Jewish response to the document Nostra Aetate of the Second Vatican Council, an adopted by the majority of the Jewish people manifesto, which answers the question: What does a Christian for a Jew ? "
When asked Spadaros, as Pope Francis see the Jewish religion, Skorka replied: "The many things that I have seen and experienced around Bergolio additionally prompted me to say that he sees Judaism as a mother of his faith. This is not merely an intellectual exercise, but a feeling, which is an important component in his personal faith.”   This statement is in need of explanation. according to the Catholic understanding of  pre-Christian Judaism (Israel) has risen in Christianity and found its completion. Post-Christian Judaism, however, is that Pharisaic cleavage of the original Judaism that rejects Christ as the Messiah. But what Judaism did  Skorka mean?

Pope Reads Rabbinic Writings and is Shaped by Them?

The Rabbi pointed at the same time then that "some viewpoints and findings of Bergoglio" obviously agree with rabbinical writings, which he wants to suggest that Pope Francis has read rabbinic or is reading and was influenced by them.
Other parts of the conversation related to the Israeli-Palestinian conflict. Of this Skorka said: "I do not expect that Pope Francis will solve all problems between Palestinians and Israelis, nor all the conflicts of the Middle East and the world." The "true power of the Pope is the credibility that he  has in  his family and the understanding of this awakened in others."
Text: Giuseppe Nardi
image: Vatican Insider / Centro Interreligioso Buenos Aires
Trans: Tancred vekron99@hotmail.com
Katholisches...http://www.katholisches.info/2014/05/17/rabbi-skorka-papst-franziskus-und-das-judentum-haben-getraeumt-uns-vor-der-klagemauer-zu-umarmen/
AMGD

the True 'power of the pope' is found only in him being Christ's Vicar - a Truth the rabbi can't begin to countenance if he wants to remain in his false religion. As for a pope who chooses not to be Christ's vicar, but still parade as a pope, he's only capable of awakening delusion in others.

It is pretentious nonsense on the parts of Popes to imply that the Jews retain a special covenant with God.

Any such concept flies in the face of all traditional catholic doctrine and teaching.

The silly thing is that rabbinical judasim has little to do with temple judaism, so their jewish forebears would hardly recognise them. rabbinical judaism teaches that the world is what needs to be perfected and that people need to reincarnate to do this. it's all very convoluted.
-
there is no such thing as the 'three great abrahamic faiths'. Christ said, before abraham as, I am. John the baptist said, "think not to say within yourselves, We have Abraham for our father. For I tell you that God is able of these stones to raise up children to Abraham.”. if you don't worship Christ, you don't worship God, but a devil.