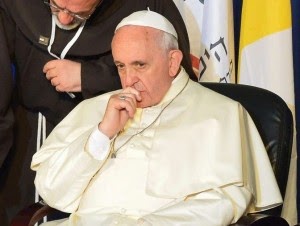 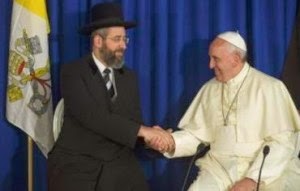 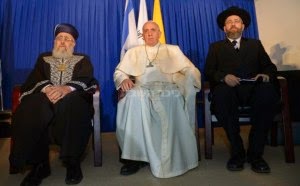 And so saith the Lord: "...Whosoever shall deny me before men, him will I also deny before my Father which is in heaven." (Matthew 10:33)

"...He that shall be ashamed of me, and of my words, in this adulterous and sinful generation: the Son of man also will be ashamed of him, when he shall come in the glory of his Father with the holy angels. " (Mark 8:38)

"...He that shall be ashamed of me and of my words, of him the Son of man shall be ashamed, when he shall come in his majesty, and that of his Father, and of the holy angels." (Luke 9:26)

"He that believeth in Him is not judged. But he that doth not believe, is already judged: because he believeth not in the name of the only begotten Son of God. " (John 3:18)

I'm afraid the Crucifix is missing from much of what the Pope says and does (which I find to be very political and worldly and often in apparent opposition to the Deposit of Faith). At best, the Faith in its objective substance is very obscured by what he says and does. Dear Lord, guide him.

This tendentious post ignores two facts:
(1) Pope Francis did not hide his cross during his meeting with the Chief Rabbis. For evidence, see http://tinyurl.com/mhg5zpb
(2) The Vatican, by way of the Joint Declaration of the 18th International Catholic-Jewish Liaison Committee, has expressly declared its "total rejection of anti-Semitism in all its forms, including anti-Zionism as a more recent manifestation of anti-Semitism." See http://www.vatican.va/roman_curia/pontifical_councils/chrstuni/relations-jews-docs/rc_pc_chrstuni_doc_20040708_declaration-buenos-aires_en.html

Hasbara propagandist puppy Dane,
Those are neither "facts" per say nor Dogmatic, especially.
zionism IS Antichrist, FACT

http://www.dailymail.co.uk/news/article-2639420/Pope-Francis-bows-head-prayer-Western-Wall-leaving-note-calling-peace-Christians-Muslims-Jews.html
The photo with David Lau is telling

The question mark in the above post poses the question as to whether Francis hid his pectoral cross, but offers evidence of other issues which would be just as problematic and are in the same vein.

I’m skeptical about your ability to read obscure legal documents at the Vatican website or even assess their doctrinal value.

At least Pope Francis is old. He'll be 78, he's been sick at least 3 x in his one year as pope...supposedly each time with a "cold" or "flu". You can't catch the flu 3x in one year! Moreover, he doesn't look good.
How much longer the Church has to suffer this man, only God knows. But I don't think it's too long.
I have a feeling that Benedict XVI might (might), out live Francis. Maybe then we'll get a Catholic Pope.

The Joint Declaration does not speak for the Vatican or the Church. The Joint Declaration also espouses the completely heretical view: " recognition of the unique and unbroken covenantal relationship between God and the Jewish People." It sure looks like his pectoral cross is covered to me in all three pictures.

Perry, are you sure you are understanding the whole hasbara thing correctly? With the liberals having switched their mindless bias from Jews (after decades) to Muslims, do you really think you should be antagonizing Christians?

You know that the days when you could win any "debate" by yelling out about Nazi anti-Semitic blah blah blah ad nauseum are drawing to a close, right?

You'll notice the one where the cross has slipped out of its hiding place because Francis is leaning forward over the model, so apparently he means to covers it with his hand.

From the article: "JERUSALEM — Pope Francis wrapped up his Mideast pilgrimage Monday with a balancing act of symbolic and sometimes spontaneous gestures..."

Well, the writer got that part right more than he intended to :)

The tinyurl pic offered by perry dane may be photo-shopped. This pic is in the same place and time frame depicted in the pic "with David Lau" that anonymous posted from the Daily Mail.

MOURNING AND WEEPING IN THIS VALLEY OF TEARS

I could swim in the tears I shed
but the thing is : I can’t swim
I will soon float on my waterbed
for my cup is filling to the brim

Didn’t you say : you would follow Me
on the Way to the Cross
that was planted on Calvary
don’t look at it as being dross

I know all too well deep in my heart
that nothing happens without Your consent
sometimes though it can be very tart
and You, went through it till the end

Daughter, take up your cross after Me
and keep walking in My Footsteps
that’s how you will win the Grand Prix
without driving any extra laps.

Wake up, you Christian Brother
Show now your truthful face
With Mary our Heavenly Mother
We'll reach that Peaceful Place

In allegiance to the Holy Father (this was still Benedict XVI )
United in prayer and fasting
No victory will claim, but rather
Satan's defeat be everlasting.

20+ years ago when I was first in the Country, some of my colleagues were wearing a Cross (-so do I- with my Star of David and my 10 commandments for I'm a catholic jew, so is my family). I had a lot of Mormon colleague-nurses too. One day I asked one of them : " Mormons say they are christians, how come that I never see a mormon wear a Cross ? " They answered : " oh NO NO we don't because the cross reminds us of HIS DEFEAT. "
How can one call him/herself a christian if you don't understand THE DEATH OF JESUS ON THE CROSS !!!!! Riki

Perry Dane, the photo you linked was photo shopped, I saw the original and his cross was hidden.