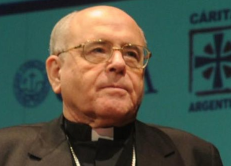 (Rome / Buenos Aires) Monday brought two newsworthy events in Rome. One as Pope Francis "sunk" a former critic in Argentina. On the other hand is was announced that  the Argentine Pope has given  the Italian Bishops Conference more leeway than any other pope, who  in reality has put it on a shorter leash  than any predecessor.

On Monday afternoon Pope Francis opened the Spring General Assembly of the Italian Episcopal Conference with a speech. Unlike any that has ever been given. The Pope as Bishop of Rome as automatically been the President since the formation of the Episcopal Conference. All Popes so far, however, are represented by a delegate appointed by them, but never intervened obviously  by their presence in the work of the Bishops' Conference. With the election of Pope Francis everything seemed to be quite different.

Surprisingly the Argentine Pope announced that he would  dispense with the nominal presidency and offered the bishops of the to choose a president for themselves from their own ranks in the future as all the other Bishops' Conferences (except Belgium). Since then Pope Francis has only intervened  more and more significantly in the Italian Episcopal Conference than any other pope before him. The  president,  appointed by Benedict XVI., Archbishop Angelo Cardinal Bagnasco of Genoa although he is still in office, however, Pope Francis has appointed a deputy and a new Secretary General. Both offices have been occupied on a proposal of the presiding delegate. Bagnasco only learned later of the personnel decisions of the Pope, which equaled his disempowerment in both cases.
"Only laconically," says the Vaticanista Sandro Magister, was he informed by the Holy See with a terse press statement of a change in Personnel. "The Holy Father Francis, has appointed S. Ex. Monsignor José Luis Mollaghan, formerly Metropolitan Archbishop of Rosario (Argentina), as a member of the to be erected commission for clerics at the CDF to address delicta graviora."

Rosario is an Archdiocese of two million inhabitants. "Archbishop Mollaghan, at 68, has certainly not yet reached the end of his career," said Magister. The abrupt removal from Argentina, his appeal to Rome under the direct control of the pope and his banishment to a not even existing curial phantom office, which is not yet built, says everything about the fact that the impact is definitive,"  says the Vaticanist.
To understand the reason for this punishment by Pope Francis against one of the most renowned Argentine bishops, Magister suggests the  "most accurate and credible", to look up the previously existing  Pope's biographies in the book, "Francis, Life and Revolution" by the Argentine journalist Elisabetta Piqué .

Criticism of Bergoglio: Too Lenient About Politics, Pastoral Gestures Too Daring, Too Little Defense of the Doctrine of the Faith

In the chapter,  that pique applied by the opponents of Bergoglio in Argentina, Archbishop Mollaghan in place together with Archbishop Hector Aguer of La Plata and the Apostolic Nuncio Adriano Bernardini in the first place. Mollagahan had not only  accused the then Archbishop of Buenos Aires of not to defending Catholic doctrine, but of making bold, exaggerated or inappropriate gestures and being too pastorally soft on government.
Contact for the critics Bergoglios in Rome were originally from Argentina Cardinal Leonardo Sandri and former Argentine ambassador to the Holy See, Esteban "Cacho" Caselli  who appears now as before a continuing Gentleman of His Holiness appearing in the Pontifical Yearbook.

The opposition  against the line of the Archbishop of Buenos Aires, says Piqué, reaches its climax in 2005/2006 reaches its climax when Nuncio Bernardini  appointmented  several bishops who were "embossed conservatives". Among them was also the new Archbishop of Rosario, José Luis Mollaghan and that of Resistencia, Fabriciano Sigampa. The appointments caused, according to Piqué,  progressive bishops unrest and discontent. Neither Mollaghan nor Sigampa had been named by the other Argentine bishops for these dioceses, said the journalist of La Nacion .
The Argentine website Pagina Catolica is a little clearer. The appointment of Archbishop Mollaghan was made ​​by bypassing  three candidates by Archbishop Bergoglio, who had operated as Archbishop of Buenos Aires in an intensive personnel policy in the appointment of bishops. While Bergoglio let the theologian who was admonished by  Rome, Galician  Andrés Torres Queiruga, whom the CDF  accused of "implicitly"  denying the resurrection of Jesus Christ, continue to speak freely in his diocese in 2012, Mallaghan imposed a ban for his diocese in Catholic institutions.
Archbishop  Sigampa has been emeritus since February 2013. As was the case under Benedict XVI. he was still  Archbishop until the completion of the 77th year of life in office. On February 26, 2013 it took two days  after the resignation German Pope for the resignation of Sigampa. Archbishop Mollaghan has now been "hit and sunk" by Pope Francis, says Magister. Only Archbishop Aguer of La Plata is still in place. "But his fate seems sealed", so  at least says the Vaticanist Magister.
Text: Giuseppe Nardi
image: Settimo Cielo
Trans: Tancred vekron99@hotmail.com
Katholisches...
AMGD
Posted by Tancred at 5:29 AM

I guess 'disappearing' people has a long tradition in sth america. seems this is a tradition Francis is happy to be faithful to.

Classic Francis. Pretend to be hands off and not micro-managing, at the same time he exerts serious pressure, and manipulates appointments and agendas. Make no mistake. Francis is totally revamping the Vatican power structure to conform to his mission of reconstructing the Roman Catholic Church into a 21st Century Universal Church devoid of traditional catholic doctrine and social teaching.

This does not have to be necessarily sad news. An office that does not exist? Of course it now exists, would Pope Francis choose someone for an office that doesn't exist. Pope Francis by choosing Archbishop Mollaghan for this office makes the office existent. Mollaghan as head of this office can now make some rules. Such as holding the Curial General and Father Volpi held accountable for "Delicta Graviora" and imposing extreme sanctions on them for attempting to destroy a Religious Order such as the Franciscans of the Immaculate. Pope Francis can't complain as he did choose Mollaghan for this new office. Go get them Mollaghan and shake up Francis himself as once did St. Catherine of Sienna to the Pope during her time.

The "flying pigs" hypothesis. Anyone who underestimates this pope is not being realistic. He is a seriously dangerous liberal modernist because he is adept at cloaks and mirrors while he continues to arrange everything to suit himself. Doubtless, he has friends in the corrupt secular world of relapolitik and can exploit his popularity to a great extent. While Francis holds all the aces Mollaghan has been put out to grass.
However, the bright spot for the victim could be following recent illnesses we might have a short-lived papacy after all.

We should not play the game of waiting for the Pope to die. Many modernists waited in anticipation for the death of St. John Paul ll. As it turned out, St. John Paul ll outlived them all. I would rather that Pope Francis recognize that he is knocking the Church down rather than building it up, and resign, calling on Pope Benedict XVl to continue as the successor of St. Peter.