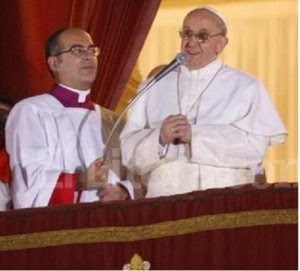 Edit: especially when it comes to those he studiously ignores, and to those he lavishes special consideration, like a dissident Irish priest whose cause he championed today.

(Vatican) Monsignor Guillermo Karcher, one of Papal ceremonialists spoke recently in an interview about his daily work with Pope Francis. The interview was conducted by the Internet TV channel of the Argentine news site Infobae . The Argentine Karcher has belonged for several years at the Office for the Liturgical Celebrations of the Pope. He is incardinated in the Archdiocese of Buenos Aires and has known Pope Francis for 20 years. He works at the State Secretariat and is one of the ceremonialists of the Pope. As such, he was on duty during the conclave. In the evening, when Pope Francis was presented to the world, he held onto the loggia of St. Peter's Basilica the microphone (see picture). In the Bild interview he gives a little insight into the life and work of the Pope.

Monsignor Karcher is a ceremonialist who belongs to those collaborators of the Roman Curia, who work closely with Pope Francis and see him most often. The Pope leads a "very regular life," said Msgr Karcher. "He rises between 4.30 und 5 clock and goes fill 10 to 11pm to bed." The Pope from Argentina "receives a lot of people every day and maintains close contacts with the Roman Curia.” After morning Mass in the chapel of the guest house Santa Marta he goes to "Breakfast, then we bring him the news from around the world, we chat with each other ... and then begins his day.” Karcher said: "He handles his appointments himself, Bergoglio organized his own life. “

"He has learned to be Pope In less than a year"

For handling of the Pope with the people and their expectations in Argentina and the politicians with whom he maintained contact, said the ceremonialist: "He has a lot of imagination. He maintains the contact with the people, that hasn’t changed.”

Among the postures and gestures of the Pope said Karcher: "In less than a year he has learned to be Pope.”

As early as last March, Msgr Karcher said in an interview with Vatican insider , Pope Francis has "a sixth sense". The Pope was able "to recognize a sick or needy person amid the crowd. This is a special grace, he can feel it in the heart.“

The pope goes "very methodically", saying it is "a characteristic of his Jesuit character. In his daily routine is a place for everything and everyone." Prior to morning Mass Francis he prepares his sermon.

Link to Katholisches….
AMGD
Posted by Tancred at 2:04 PM

I pray he finds the time to order an end to the evil persecution of the Franciscan Friars of the Immaculate.