The "Luxury Residence" of Cardinal Bertone -- One of the Media Campaigns Against Pope Benedict's Secretary of State? 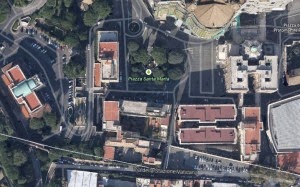 (Vatican) Catholic  media itself  has been grazing  in the field of moral sanctimony against the former Secretary of State, Cardinal Tarcisio Bertone. He has created a "luxury apartment" of 600 or 700 square meters through extensive renovations. Pope Francis disapproves this luxury. And many Catholics believe  the media at the touch of the button whatever is put before them.

Now the Salesian Bertone could actually make one a lot better. But that was  not for the years of scolding that made hardly any good to say about the son of Don Bosco. Almost always, when there were attacks anywhere from within the Church against Bertone, it  was mostly mean for Pope Benedict XVI.. Calling him by name was avoided for reasons of expediency.    It was directed to the Cardinal Secretary of State, if only because he also synonymous with the  long odious Roman Curia, led to the  bashing being more uninhibited. It was not always wrong, but in the sum highly disproportionate.

The Jacobin flail it Afflicts Those Representatives of the Church,  That Didn't Dance in the Rio  Flash Mob

The Jacobin flail was not put away after the resignation of Benedict.  More than a year after the election of Pope Francis Bertone himself is being called upon to contrast between a supposedly "dark" past and now a radiant present of the papacy and the Church in memory. A kind of perpetuation of the same propaganda. Here Pope Francis made known the dismissal of Bertone last year by the Vatican diplomat  Archbishop Pietro Parolin. According to the methods of the Jacobi only certain high church officials are neatly pelted with dirt. Amazingly, it was precisely those that were not ready in Rio de Janeiro to dance the bishop flash mob dance  and thus presented proof, nor to sell their priestly and episcopal dignity in such a clownish way for the amusement of the world.

Now Bertone has been  placed in the  pillory for the last few weeks because of an alleged "luxury residence". The former Cardinal Secretary of State had put together several existing apartments in the Vatican in order to make an  extensive, costly reconstruction work. 600 square meters of living space and 100 square meters of terrace. This is a scandal and in addition, a provocation, because Bertone has his new "palace" refers directly next to the guesthouse Santa Marta, where Pope Francis occupies an apartment of less than 100 square meters. The press is underlining the stark contrast between the luxury of pre-Francis-time and the sober modesty of Pope Francis.
The "scandal" was unleased by  the Italian anti-Catholic tabloid Il Fatto Quotidiano . It  drew attention to no less anti-clerical newspaper than La Repubblica last April 20, for international attention.  Cardinal Bertone's reaction was even more late. Which again, is, however, not entirely his fault. Such delays unfortunately were several times a feature of his tenure as Cardinal Secretary of State to the detriment of Pope Benedict XVI. What  Pope Francis  makes too much of in the way of public relations today in their own right, was completely lacked both Pope Benedict XVI. and Bertone.

Assigned Apartment is Actually Half the Size

The "luxury residence" is quite a canard, in reality. Bertone occupies a space assigned according to his age in office within the Vatican walls. It is a part of one floor in the old Palazzo San Carlo. The rooms are by today's standards  particularly  large, but also not a number of rooms. This all sounds great, but is not very practical. Overall, the former Secretary of State lives in a apartment that is just half as large as that claimed by media, namely 300 square meters. There, he and four members of staff, a secretary and three nuns are housed. In the apartment there is also the study of the Cardinal. The financing of the renovation work organized by the Cardinal himself.   He owns nothing as a religious.

It's Not About Facts, but About Moral Discrediting

The comparison with Pope Francis in Santa Marta is lagging in several ways, starting with the smaller space layout of the guest house. The comparison was made by certain media only to stage a contrived contrast between luxury and modesty, between rich and poor, between good and evil, between Benedict XVI. and Francis. While Il Fatto Quotidiano  still insisted after its first report knew to  present Bertone's higher "luxury" "angering" Pope Francis,  to present the Cardinal  now in a letter to two church newspapers that he had been called by Pope Francis to explain this to him in solidarity. The Pope has shown his disappointment over the media campaign against the former Cardinal Secretary of State.

However, it goes for  Bertone's part also that the Cardinal had asked the Vatican spokesman Father Federico Lombardi several times in vain for an official correction of the incorrect media reports.
The appointment of the Secretary of State Cardinal Bertone has never been accepted by his predecessor, Cardinal Angelo Sodano. In protest, that the German Pope did not assign one of his diplomats to the highest Curia Office, Cardinal Sodano  did not leave his residence until the end of 2007, more than a year after being replaced by Bertone, the official residence of the Cardinal Secretary of State at the Vatican. For that reason Bertone was only able to move  in much later.  This affront, who was made by  the elegant but relentless opponent Bertone Sodano, was the real reason for the ever-changing public attacks on Bertone through the targeted dissemination of true, half-true and false information.
One reason why the public relations during the pontificate of Pope Benedict XVI. never really worked well. If there was trouble, as in the Williamson case, where there is a persistent rumor in Rome that some Church circles that they intentionally let the German pope  run into the knife, ultimately Bertone was held responsible. But now  others are  throwing a wrench in the gears.
Text: Giuseppe Nardi
Image: screenshot of Google Infovaticana
Posted by Tancred at 5:28 PM

Strange how the papacy railed against the alleged "bishop of bling" in Hesse and removed him (was it because he was too traditional?) and yet the henchmen in "full communion" can do as they please - yes, even sodomise altar boys and cover it up. Indeed, it is still happening and if a presbyter says anything he is reprimanded by his bishop. Other American bishops who tried the multi-million dollar palace scam were pressurised by there own parishes but the pope remained silent and inactive about them (Wilton Gregory - Atlanta & John Myers of Newark).
Such are the hypocrits and whited-sepulchres in Rome these days whose double-standards reveal everything we already know about liberal modernist humbug and treachery. Their deeds and actions follow them close behind. It is in the fruit of the tree - is it edible or inedible? Our Blessed Lord gave us this benchmark to discern for ourselves.

If they want to go after Bertone let them go after him for lying to the world...along with a few popes...about the Third Secret of Fatima.

Funny... Cardinal and Pope Ratzinger made some clear statements about that. eponymousflower.blogspot.com/2014/01/third-secret-of-fatima-document-is.html