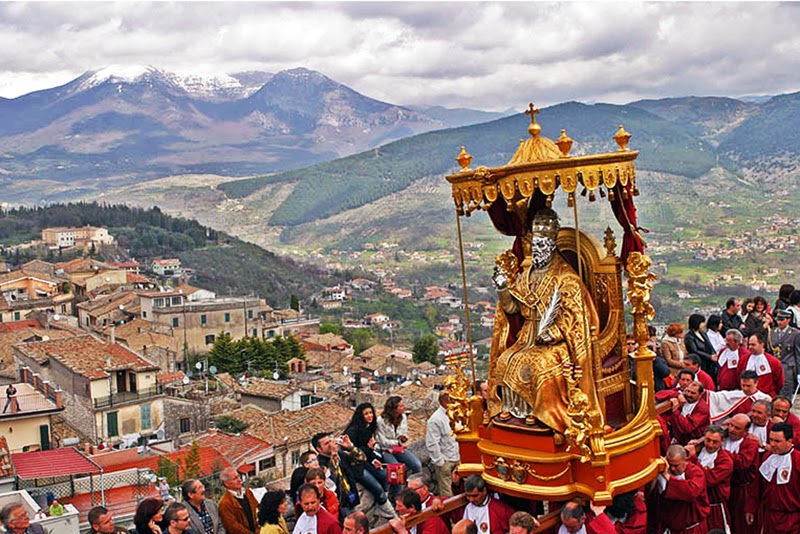 (Rome) The always valid ban on lay people getting too close to the holy things  and  touching the chalice and the sacred vessels, was officially enshrined in the earliest Christian times by the holy Pope Sixtus I (c. 115-125). The commemoration of this Pontiff is committed by the Church in the old and the new liturgical calendar on 3 April.  His Latin first name alludes to the number six. Sixtus was the sixth successor of the Apostle Peter and the seventh Vicar of Christ on earth. The son of a Roman priest and shepherd was elected by the clergy of Rome on 115  to the bishop.
The need to explicitly codify the prohibition resulted from  attempts by the unworthy to approach  holy things, which are exclusively reserved for the priests of God. The sacredness of the Holy Sacrifice of the Mass resulted in the Latin Church, as in the apostolic Eastern Church, to largely obscure services from the sight of outsiders, but also of the faithful. Non-baptized persons were not allowed to enter the houses of worship during the Holy Mass. The Sacrifice of the Mass took place in the West behind a curtain and takes place in the East today behind the iconostasis for the protection of the Holy.

Penetration of the Laity in the Presbytery

It was not until the revolution of the zealots of the liturgical reform, which came after the Second Vatican Council and the subsequent liturgical abuses,  meant that the laity invaded to the restricted area of the presbyterium   during the Holy Mass,  the Sanctum Sanctorum, which - as the name presbyter = Priest - expresses, is reserved to the celebrant and the altar servants. In many places the laity are instructed to hand out Holy Communion, so that they take not only the Holy vessels, but also the consecrated Hosts in the hand.
At the time of Pope Sixtus I the emperor Hadrian (117-138) ruled, an original philosopher on the throne, a lover of Greek culture and art. Although heathen, he declined the persecution of Christians. To one of his proconsuls in Africa, he wrote: "If someone brings charges and can prove that the Christians who commit offenses against the laws are guilty, leave, then punish them for their crimes. By Hercules, yet  if someone is just looking for a mere pretext to punish them, then you have to decide depending on the severity and punish them instead."

Pope Sixtus  put particular emphasis on the faithful preservation and development of the cultus. He summed up the current practice together with provisions that were to be a seal for the Christian liturgical tradition. It was also a big concern for him that all the Christian communities themselves remained in contact, because, as it seems it  had already come to pass during his pontificate,  because  the exact date of the Easter celebrations became the first disagreement between East and West.
Christian tradition also owes Sixtus I for the hymn of the Trisagion,  which was dedicated of the divine Trinity triple Sanctus. The expression of Greek Trisagion hagios (holy) and treis (three) means the thrice-holy God. Already in the Old Testament we find this definition of the Holy Trinity. The thrice Holy Prophet Isaiah in the Old Testament corresponds to the naming of the three divine persons in the New Covenant as saying: Holy is God the Father, God is holy son, holy God is the Holy Spirit. In order to acquire this knowledge independently, you had to be able to read and know well the Scriptures  and thus belong to the circle of educated people. To make this praise of the Trinity accessible to all believers, Pope Sixtus introduced the thrice praise into worship in the Holy Mass just before the Consecration and Transubstantiation.

Trisagion, the Thrice Holy in the Old and New Testaments

All apostolic churches regardless of rite know this Trisagion, the angels singing, which Isaiah heard, when he had his vision of heaven. The well after him, it was described by St. John the Apostle and Evangelist in the Apocalypse (4:8).
Dom Prosper Guéranger (1805-1875), the famous Benedictine Abbot of Solesmes said: "What do the angels sing?Sanctus, Sanctus, Sanctus, Dominus Deus Sabaoth . They celebrate the holiness of God. But how do they celebrate? In a perfect way: they use the superlative, in which they call three times that God is really holy. (...) But why did they turn to God three times with the determination of holiness? Because holiness is the most important of divine perfection: God in his essence is holy. "

"God is as Strong as Holy and as Sacred as Strong"

The Trisagion we also find in the Te Deum : " Tibi Cherubim et Seraphim incessabili voce proclamant: Sanctus, Sanctus, Sanctus Dominus Deus Sabaoth "(Holy, holy, holy, Lord God of Hosts). The hosts in the service of the Almighty have nothing to fear, as all wars, tests and hurdles running by their God have ended in triumph. Dom Guéranger wrote: "God is holy and strong, as strong as holy and as sacred as strong."
This Roman Pope whose holiness is sung in Catholic Christendom to this day, died not as a martyr, although he is occasionally. His grave is awaiting the resurrection of the body, is not near the grave of St. Peter in the Vatican, but in the Cathedral of St. Paul in Alatri in Rome, where he is revered as a patron saint.
Text: Giuseppe Nardi
image: Alatri / Lazio
Trans: vekron99@hotmail.com
Kath.net...
AMGD
Posted by Tancred at 8:37 AM