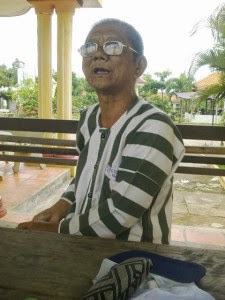 (Saigon) Persecuted by the communist regime, he used the chains that robbed him of   freedom to pray the rosary. Nguyen Huu Cau converted to Christ in prison. A few days ago he was released after more than 37 years in prison and a prison camp. "In 1986, I was baptized at the Easter Vigil by the Jesuit Joseph Nguyen". Cau described in an interview with Catholic News the hard fate of Vietnamese Catholics. The Jesuit priest was the one who told him about Christ in custody   and taught him the catechism. Since then, "I have prayed the Rosary every day seven times  and Stations of the Cross five times," said Nguyen Huu Cau-.
After futile attempts reeducation, Cau was released  last 22 March. 32 years spent as  the "enemy of the people" in prison and more than five years in a concentration camp. After his release, he said: "I thank God that He has forgiven my jailers."
Due to severe torture during his detention, Nguyen Huu Cau-is now deaf and almost blind. "In prison, I've gotten to know Christ and found to faith."

From the Death Penalty to Life Imprisonment

In 1983 he was convicted of "sabotage" and damage to the reputation of the party and sentenced by the government as "an enemy of the people" to death. Later the sentence was commuted to life imprisonment. For 32 years   Cau had been in the prison camp Z30A K2  in the middle of the jungle. He wrote more than 500 letters  to the Communist regime and called for the resumption of his trial. He never received a response. On 22 March 2014 he was released from prison 39 years after his first arrest. The release was due to an amnesty granted by Vietnam's State President Truong Tan Sang because of the precarious health of Nguyen Huu Cau-.

The Hardest Rosary of the World

Cau prayed the Rosary "on the chain to which I was chained. It had 90 rings. I have made from the chain that took my freedom, my own personal rosary. From Father Joseph Nguyen Cong Doan, who was himself a prisoner, "I got to know the love of God. So I could even compose a song that is dedicated to the Holy Cross, which has carried me in an earthly captivity." Father Nguyen works today at the Pontifical Biblical Institute in Jerusalem.

Forgiveness for His Tormentors

Before his conversion, Nguyen-Huu Cau kept his hatred against the Communist regime and against his tormentors alive. He hoped someday to be able to take revenge for what they did to him. Several times he thought at the time of suicide to escape captivity. "But the love of God and the Blessed Mother have changed me. I feel no hatred more for my tormentors. The Holy Trinity and Mary helped me to overcome my strife with my fate. Have prevented me from being killed  while in custody all these years. "
Text: Giuseppe Nardi
image: Tempi
Trans: Tancred vekron99@hotmail.com
Link to Katholisches...
AMGD
Posted by Tancred at 5:11 AM

Well that is one atonishing story of faith and the reality of Grace!

May God continue to lavish you with His amazing Grace dear Nguyen-Huu Cau!

Most edyfying to me - who is such a coward for physical pain...

When I think of my own personal efforts for holiness, I think of these incredible souls who suffered for so many years and remained so in love with Christ and His Blessed Mother. No comparison! So I must turn to the Little Way and know that I may not be able to offer the long or big sufferings so I must descend to a more humble and yet more trusting place in my relationship to Christ.

The fortitude and faith of Nguyen Huu Cau makes for very humble reading. Only the hardest soul could fail to be impressed by this mans perseverance.